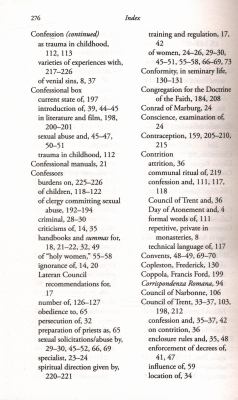 The dark box : a secret history of confession / John Cornwell.

The sacred and profane history of confession in the Catholic Church, with a shocking new expose of its role in the child abuse scandals of the twentieth century.

Author of the controversial Hitler's Pope, Cornwell draws connections among the first use of a confessional box in 1576, the lowering of the age for confession to seven in 1910, and the pederasty crisis in the Catholic Church. Cornwell's facts are fine, but many might have difficulty accepting his interpretation. While recognizing the good points of people and events, he tends to emphasize the dark side, as when he speaks of Pope Pius X as having a devout and avuncular exterior that hid a bullying streak. He does speak of the anti-Catholic literature that sensationalized the lives of priests but argues that priests lived lives that did not necessarily give the lie to such tales. Cornwell (divinity, Jesus Coll., Univ. of Cambridge) also blames the seminaries for (mis)handling teaching about sexuality. His examples don't always uphold his argument: he speaks of one priest who abused young girls while hearing their confessions seated by the altar. VERDICT This book will appeal to those who enjoyed -Hitler's Pope and titles that expose the darker side of Catholicism. Unfortunately, there is no positive, recent history of confession to recommend in its place. Perhaps Cornwell's book will call one forth.-Augustine J. Curley, Newark Abbey, NJ (c) Copyright 2014. Library Journals LLC, a wholly owned subsidiary of Media Source, Inc. No redistribution permitted.

Cornwell was raised Catholic and began studying for the priesthood at an early age. While in seminary, a priest attempted to seduce him during confession. Although Cornwell subsequently left the church, he occasionally wonders whether his journey masks a search for the lost abusers of one's childhood. Read as a personal odyssey, his book is quite interesting. Cornwell is less successful proving in any rigorous historical or social-scientific manner his provocative claim that the church's 1910 decision to lower the age for confession from 14 to 7, and increase its frequency, eventually resulted in the sex-abuse scandal that plagues the church today. That said, he asks important questions about confession's potential to inflict lasting psychological damage on children with the concept of sin and evil, especially as they concern one's physical body and natural urges, and the requirement to confess transgressions are introduced at too early an age. Cornwell's book also underscores the sad fact that some priests used the cover of the confessional for their evil purposes.--McConnell, Christopher Copyright 2010 Booklist

A haunting study, both scholarly and personal, that situates the practice of confession as the source of the Catholic Church's clerical abuse. In this deep-reaching history that also encompasses the voices of the deeply scarred, provocative English historian, memoirist and novelist Cornwell (Fellow/Jesus Coll., Cambridge; Newman's Unquiet Grave: The Reluctant Saint, 2010, etc.) focuses on Pius X's lowering of the age of first confession from 13 to age 7 from 1910 onward as the spur to the church's worst sexual abuses. The discrepancy between Catholic teaching and practice has dogged the church for centuries, and confession evolved from a way to reconcile penitent sinners back into the fold into an outlet for the severe repression of priests. A form of "repetitive, private contrition" had been practiced in early monastic communities in Ireland, Scotland and Wales. Making "auricular" confession once a year was set forth by the Fourth Lateran Council of 1215. A whole clerical class of "specialist confessors" sprang up, obsessed with the examination of conscience, ripe for inquisitional manipulation. Sexual abuses around confession helped galvanize the Protestant Reformation; in response, the "little black box" became a familiar item of church furniture in Milan's Duomo in 1576, prompting a dangerous shift from the "public or social nature of sin to the scrupulous examination of recollected motivation." Sexual solicitation, of both men and women, during confession was not uncommon, especially as clergymen were trained to be isolated, regimented and repressed (Cornwell enlists as evidence his own seminarian training in England in the 1960s). Yet it wasn't until children were included as penitents, as part of Pius X's staving off the ills of secular modernism, that the most egregious abuses were indulged and tolerated. Enlisting a legion of voices attesting to their "soul murder" by confessional priests, Cornwell offers another strong indictment of the church.]] Copyright Kirkus Reviews, used with permission.
More book reviews at iDreamBooks.com