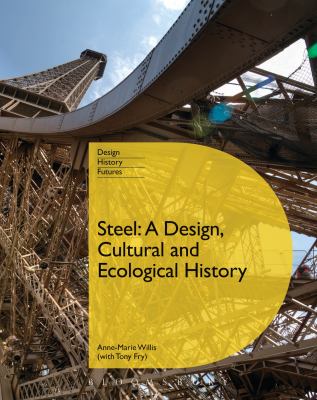 Steel has, over centuries, played a crucial role in shaping our material, and in particular, urban landscapes. This books undertakes a cultural and ecological history of the material, examining the relationship between steel and design at a micro and macro level - in terms of both what it has been used to design and how it has functioned as a 'world-making force'.
The research for the book is informed by diverse sources including industry journals, contemporary accounts and technical literature - all framed by rich, early accounts of iron and steel making from the middle ages to the opening of the industrial age, and most notably, the crucial works of Vannoccio Biringuccio, Georgius Agricola, Andrew Ure and Harry Scrivenor.
In contrast, trans-cultural accounts of the history of metallurgy from eminent sinologists and cultural historians like Joseph Needham and G.E.R. Lloyd are used. Readings on the pre-history and history of science, as well as histories and philosophies technology from scholars such as Siegfried Giedion, Merritt Roe Smith, L.T.C Rolt, Robert B. Gordon inform the analysis. Social and economic history from historians such as Eric Hobsbawn, William T. Hogan and David Brody are consulted; labour process theory is also examined, particularly the influential writings of F.W. Taylor in the late 19th and early 20th centuries and his contemporary critics, like David Nobel and Harry Braverman. Many other disciples also inform the account- histories of urban design and architecture, transport and military history, environmental history and geography.

Tony Fry (Queensland College of Art, Australia), one of the world's leading experts on the theory of design and its impact on culture, and Anne-Marie Willis (design theory, German Univ., Egypt) have produced an exceptional piece of scholarship with Steel: A Design, Cultural, and Ecological History. The book is part of a series called "Design, Histories, Futures," which "aims to advance knowledge on the wider historical significance of design." This work defies easy categorization: it is part history, part historiography, part ecological philosophy, and part design theory. All parts, however, are tied seamlessly together under one conceptual umbrella--the history of steel (and iron) production and the past, present, and future effects these materials have had (and will continue to have) on the world. Fry and Willis also pay close attention to the question of sustainability as they trace the social and economic histories of steel in various cultures, both Western and non-Western. This carefully documented study will be an excellent source for all historians of technology and for specialists in ecological and design studies. Summing Up: Highly recommended. Graduate students, researchers/faculty, and professionals/practitioners. --Todd Timmons, University of Arkansas--Fort Smith
More book reviews at iDreamBooks.com