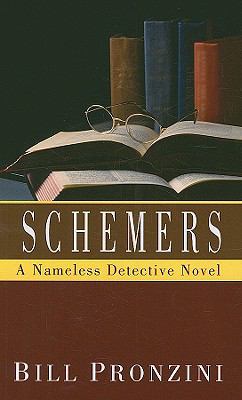 Genre/Form: Detective and mystery fiction.DDC classification: 813/.54 Summary: A locked room mystery that goes from stolen books to stolen lives and the hunt for a phantom stalker with a penchant for pouring acid to make his point give Nameless and his partner Jake more than enough work to earn their fees--as long as neither turns his back at the wrong moment.
Tags from this library: No tags from this library for this title. Log in to add tags.
Fiction notes: Click to open in new window

A new Nameless Detective story from the 2008 Mystery Writers of America Grand Master. The hunt for a phantom stalker with a penchant for pouring acid to make his point gives Nameless and his partner Jake more than enough work--as long as neither turns his back.

A locked room mystery that goes from stolen books to stolen lives and the hunt for a phantom stalker with a penchant for pouring acid to make his point give Nameless and his partner Jake more than enough work to earn their fees--as long as neither turns his back at the wrong moment.

This is the 36th book (33 novels and three collections) to feature 2008 Mystery Writers of America Grandmaster Pronzini's anonymous hero, the Nameless Detective (Savages). His series features appealing heroes; in recent books, a second detective, Jake Runyon, works alongside Nameless, usually on his own case. The puzzles at the heart of the cases are well conceived (and well concealed). The plot winds its way through enough false starts to please the finickiest reader and finishes with a satisfying resolution. In this installment, Nameless has been hired by a wealthy bibliophile to solve a genuine locked-door robbery, which soon turns into a locked-door murder. Jake, meanwhile, hunts a stalker who seems to have no ties to the family he is pursuing. Their office dispatcher has her own personal drama to resolve. Pronzini is a pro at PI fiction: he never cheats on the reader, respecting the conventions of the hard-boiled detective stories and puzzle mysteries he employs so well. Warmly recommended for mystery collections.-David Keymer, Modesto, CA (c) Copyright 2010. Library Journals LLC, a wholly owned subsidiary of Media Source, Inc. No redistribution permitted.

In MWA Grand Master Pronzini's 34th Nameless Detective novel (after 2008's Fever), his series sleuth takes on a challenging locked-room puzzle. When Gregory Pollexfen, a wealthy bibliophile, reports the theft of eight rare first edition mysteries from his collection, which he keeps in a secured room in his San Francisco home, Nameless investigates on behalf of the insurance company involved. The subsequent shooting death of the victim's ne'er-do-well brother-in-law in the locked library complicates the original case, though Pollexfen's wife, who was also in the sealed room and whose prints are on the weapon, is the obvious suspect. Meanwhile, a subplot in which Nameless's colleague, Jake Runyon, attempts to track down a stalker targeting a Los Angeles couple is notable only for Runyon's slow emergence from the emotional shell he developed after his wife's death. Since the two story lines aren't obviously compatible, readers may wonder why Pronzini decided to combine them. (Apr.) (c) Copyright PWxyz, LLC. All rights reserved

Gregory Pollexfen collects rare mystery books, and eight of his most valuable have been stolen. The police aren't paying much attention, prompting Pollexfen to file a claim with Great Western Insurance, which, in turn, hires semiretired San Francisco private investigator Nameless to work the case. Pollexfen is too rich to be suspected of an insurance scam, so Nameless focuses on the other members of the dysfunctional household: the gold-digging wife and her brother. In a parallel case Nameless' partner, Jake Runyon, investigates the harassment of the Henderson brothers. Their father's grave was recently desecrated, and one of the brothers was attacked. The agency's third associate, research wizard Tamara, is floating on cloud nine with a new man in her life, but he may have his own secrets. The award-winning Pronzini has more than a little fun with the locked-room mystery about missing mysteries, but as usual, the most compelling aspects of the book are the personal backstories of Jake, Nameless, and Tamara. These characters evolve realistically from novel to novel, and readers savor their growth as much as the cases they investigate.--Lukowsky, Wes Copyright 2009 Booklist

The 32nd case for the Nameless Detective (Fever, 2008, etc.) is a classic locked-door mystery about which Nameless is clueless. Called in by Barney Rivera, a nasty little twerp who happens to be head claims adjuster for mammoth, deep-pocketed Great Western Insurance, Nameless knows he's expected to fail. Rivera relishes other people's failures and collects them as if they were rare stamps or coins. Or, more to the point, as if they were rare books. Gregory Pollexfen, noted fat cat and Great Western policyholder, collects first editions of vintage mystery novels. His 15,000 volumes, appraised in the multimillions, are kept in a room to which there is only one door, to which there is only one key, to which no one but Pollexfen has access. Yet eight of his beauties have been purloined, he says, a haul worth a fortune. Nameless remains baffled until an offhand remark by his 13-year-old adopted daughter sets his sleuthing cap on straight. While he chases Hammetts and Christies, Jake Runyon, the agency's ace field operator, has his hands full investigating a strange case of vengeance whose motive no one can figure out, and Tamara, Nameless's cool young partner, has her bed full of a lusty stranger she might better have first investigated. Plotted and written with the obvious care customary in this reader-friendly series. Copyright Kirkus Reviews, used with permission.
More book reviews at iDreamBooks.com