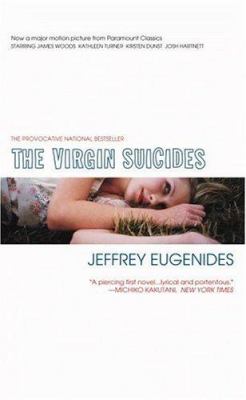 DDC classification: 813/.54 Summary: The story of five sisters who all commit suicide in the same year. Trying to fathom events two decades later, one of the boys who used to spy on them recreates the fateful year, from the youngest's first plunge into her own bloodbath, to the final field day of the national press.
Tags from this library: No tags from this library for this title. Log in to add tags.
Fiction notes: Click to open in new window

This beautiful and sad first novel, recently adapted for a major motion picture, tells of a band of teenage sleuths who piece together the story of a twenty-year old family tragedy begun by the youngest daughter's spectacular demise by self-defenstration, which inaugurates 'the year of the suicides.'

The story of five sisters who all commit suicide in the same year. Trying to fathom events two decades later, one of the boys who used to spy on them recreates the fateful year, from the youngest's first plunge into her own bloodbath, to the final field day of the national press.

Eugenides's remarkable first novel opens on a startling note: ``On the morning the last Lisbon daughter took her turn at suicide . . . the two paramedics arrived at the house knowing exactly where the knife drawer was, and the gas oven, and the beam in the basement from which it was possible to tie a rope.'' What follows is not, however, a horror novel, but a finely crafted work of literary if slightly macabre imagination. In an unnamed town in the slightly distant past, detailed in such precise and limpid prose that readers will surely feel that they grew up there, Cecilia--the youngest and most obviously wacky of the luscious Lisbon girls--finally succeeds in taking her own life. As the confused neighbors watch rather helplessly, the remaining sisters become isolated and unhinged, ending it all in a spectacular multiple suicide anticipated from the first page. Eugenides's engrossing writing style keeps one reading despite a creepy feeling that one shouldn't be enjoying it so much. A black, glittering novel that won't be to everyone's taste but must be tried by readers looking for something different. Previewed in Prepub Alert, LJ 12/92.-- Barbara Hoffert, ``Library Journal'' (c) Copyright 2010. Library Journals LLC, a wholly owned subsidiary of Media Source, Inc. No redistribution permitted.

Eugenides's tantalizing, macabre first novel begins with a suicide, the first of the five bizarre deaths of the teenage daughters in the Lisbon family; the rest of the work, set in the author's native Michigan in the early 1970s, is a backward-looking quest as the male narrator and his nosy, horny pals describe how they strove to understand the odd clan of this first chapter, which appeared in the Paris Review , where it won the 1991 Aga Khan Prize for fiction. The sensationalism of the subject matter (based loosely on a factual account) may be off-putting to some readers, but Eugenides's voice is so fresh and compelling, his powers of observation so startling and acute, that most will be mesmerized. The title derives from a song by the fictional rock band Cruel Crux, a favorite of the Lisbon daughter Lux--who, unlike her sisters Therese, Mary, Bonnie and Cecilia, is anything but a virgin by the tale's end. Her mother forces Lux to burn the album along with others she considers dangerously provocative. Mr. Lisbon, a mild-mannered high school math teacher, is driven to resign by parents who believe his control of their children may be as deficient as his control of his own brood. Eugenides risks sounding sophomoric in his attempt to convey the immaturity of high-school boys; while initially somewhat discomfiting, the narrator's voice (representing the collective memories of the group) acquires the ring of authenticity. The author is equally convincing when he describes the older locals' reactions to the suicide attempts. Under the narrator's goofy, posturing banter are some hard truths: mortality is a fact of life; teenage girls are more attracted to brawn than to brains (contrary to the testimony of the narrator's male relatives). This is an auspicious debut from an imaginative and talented writer. Literary Guild selection. (Apr.) (c) Copyright PWxyz, LLC. All rights reserved

The Lisbon girls, all five of whom committed suicide in the early 1970s, haunt the memories of boys next door in a wealthy Detroit suburb. A nameless narrator, one of the boys, 20 years later collects and weaves together the impressions that friends, neighbors, and parents had of the dead girls. Except for school and group outings to two ill-fated parties, the girls' lives played out confined to their dwelling, a cloistered existence protected by a mother vigilant for their virtue and by a meek father cowed by his feminized surroundings. Did those surroundings spur Cecilia to throw herself from a window, sending the house into a degenerating gloom that bottomed out with the final exits of the final four? One of the boys, a Twelve Stepper now who made it with the bad girl of the bunch, can't settle his addled mind on a theory, but the rest remember the time, place, and sightings of the pretty Lisbons with the magnified focus of their very furtiveness. The evocative reconstruction props up the adolescent atmospherics of that time (the author is now age 32) as much as it ostensibly dissects the tragedy, which the author's alter ego narrator finds is sadly unfathomable anyway. After this distinctive debut, Eugenides' second effort should reveal if he can expand his appeal beyond his generation. ~--Gilbert Taylor

Debut novelist Eugenides is a heavyweight: proof of it is in nearly every pitch-perfect sentence of this startlingly and very good book. A group of teenage boys in a Detroit suburb have come under the siren spell of a group of like-aged sisters, the Lisbon girls, the eldest of whom, Cecilia, has killed herself by jumping out a bedroom window onto a fence. Shocked and dislocated by the fact of young, willful death, the boys are increasingly fascinated as the always strict and secretive Lisbon family goes into a kind of cold storage (the other girls eventually withdraw from school), and the house is let go into decrepitude (the boys, using binoculars from up in a treehouse, can see that the other girls have turned Cecilia's bedroom into a shrine). To rescue the Lisbon girls becomes the boys' instinctive obsession--and an accepted invitation to the prom almost accomplishes this. But one sister, Lux, has turned promiscuous--dooming her and her sisters' chances for freedom thereafter. Left to them all is death only. Eugenides, meanwhile, writes just about as well as anyone in recent memory has about male teenage desire, mythologizing, and half-rational thought: one unforgettable scene has the boys and the Lisbon girls communicating on the phone by playing certain popular songs close to the receiver for each other, third-party messages heartbreakingly personalized. The boys narrate the story together like a chorus, moving around in time, ever-haunted, in prose that is sinuous, untricky, yet polished. They come to recognize that the Lisbon girls mean life and death simultaneously--and that they will never get over having got to know this so young. Maybe the most eccentrically successful, genuinely lyrical first novel since William Wharton's Birdy. Not to be missed.
More book reviews at iDreamBooks.com