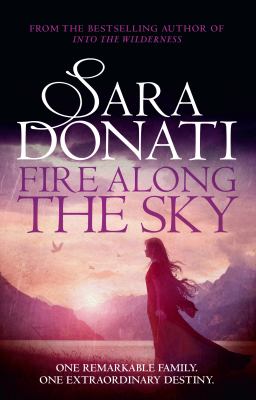 Fire along the sky / Sara Donati.

Genre/Form: Family saga fiction. | Historical fiction. | Domestic fiction.DDC classification: Free Fiction Summary: In 1812, Elizabeth and Nathaniel Bonner mark the return of Nathaniel's daughter Hannah, while her half-brother Daniel joins the militia and his twin, Lily, falls in love with a dark and dangerous stranger.
Tags from this library: No tags from this library for this title. Log in to add tags.
Fiction notes: Click to open in new window

The epic frontier tale of love and adventure that began with the bestselling Into the Wilderness continues with an indomitable woman's journey across a young nation threatened by the flames of war. The year is 1812 and Hannah Bonner has come home to the mountain cabin in Paradise where she grew up with her father, Nathaniel, and her stepmother, Elizabeth. But she has returned alone, without her husband and without her son - and with a story of horror and loss that she cannot bear to tell. As Hannah struggles to pick up the threads of her old life, resuming her duties as a gifted healer among the sick and needy, little does she realise that she is about to face her greatest challenge ever. In her absence, Hannah's stepsister Lily has grown into a stubborn and reckless beauty, whose wayward affair with a married man will have shattering consequences. As the distant thunder of war draws ever closer, Hannah is called away to perform one final act of courage and sacrifice. And in risking everything once more, she may learn to live - and perhaps love - again.'One of those rare stories that lets you breathe the air of another time, and leave your footprints on the snow of a wild, strange place' Diana Gabaldon on Into the Wilderness

In 1812, Elizabeth and Nathaniel Bonner mark the return of Nathaniel's daughter Hannah, while her half-brother Daniel joins the militia and his twin, Lily, falls in love with a dark and dangerous stranger.

Elizabeth and Nathaniel Bonner's adult children take center stage in this fourth novel (after Lake in the Clouds) in Donati's "Into the Wilderness" series, which takes place during the War of 1812. Daughter Hannah returns home without her husband and child, bearing emotional wounds too deep to discuss. Meanwhile, twins Lily and Daniel, now young adults, set out on their own, Lily to study art in Montreal and Daniel to fight in the war. Donati's usual cast of villagers play a central role: widowed Bonner cousin Jennet Scott leaves her family home in Scotland to reunite with the man she's loved since childhood, conniving Jemima Southern is suspected of the mysterious deaths of a mentally ill woman and a freed slave, and housekeeper Curiosity Freedman serves again as a voice of patience and reason. Fans of earlier titles will not be disappointed, as this novel contains the same combination of romance and adventure, not to mention the most intriguing mystery in the series yet. However, references to characters and events in the previous titles may distract newcomers. Recommended for libraries where historical fiction is popular.-Nanette E. Wargo, Champaign P.L., IL (c) Copyright 2010. Library Journals LLC, a wholly owned subsidiary of Media Source, Inc. No redistribution permitted.

Donati continues the saga of the valiant Bonner family, last seen in 2002's Lake in the Clouds, in this sprawling, slow-to-start epic starring four formidable women. It's 1812, and Elizabeth Bonner-teacher, crusader and second wife of hunter/trapper/farmer Nathaniel-is still living in a mountain cabin above the village of Paradise in upper New York State. With her is her restless, independent daughter, Lily, whose plans to study art in England were dashed by the beginnings of the war. Nearby in Montreal is the newly widowed Scotswoman Lady Jennet, who has come to the new world to find the man she should have married, Nathaniel's son Luke. And arriving presently is Hannah, Nathaniel's half-Mohawk daughter by his first wife; after 10 years as a healer with her mother's people, Hannah comes home to recover from a terrible personal tragedy. This saga sees Lily through one disastrous romance and then a second, tempestuous but ultimately successful one, and Lady Jennet-a charming storyteller and Tarot reader-through the American invasion of French Canada, where another Bonner son is wounded and imprisoned. Hannah embarks on a search for peace and, along with Jennet, aids the prisoners held in Canada's Nut Island stockade. This is an episodic but entertaining novel held together by the kind of family loyalties that defy cruelty, war and even fate itself. Agent, Jill Grinberg. (Aug. 31) (c) Copyright PWxyz, LLC. All rights reserved

Historical fiction writer Donati continues her popular Wilderness series. These plot-heavy and somewhat dense books (the list of primary characters runs to two pages) focus on the rugged lives of hard men and strong-willed women eking out an existence on the New York frontier. In this new novel, we meet the second generation of the Bonner clan--the sons and daughters of Nathaniel and Elizabeth Bonner, two primary characters from the previous entries in the series. As the epic saga unfolds, Nathaniel and Elizabeth try to guide their brood through various calamities and personal relationships. The year is 1812, and their daughter, Hannah, has just returned to the family's mountain cabin, the victim of a tragedy that has claimed her husband and child. Hannah, once a talented healer, is a forlorn shadow of her former self. In addition, the war drums are beating, and as the War of 1812 intrudes on the family's life, the village's young men, including Hannah's brother, Daniel, are eager to take up arms. Meanwhile, the precocious youngest child, Lily, is growing up fast; a recently widowed cousin from Scotland is also thrown into the mix. Readers will enjoy following all of their stories as well as those of several neighbors and fellow frontiersmen. Donati's mix of historical fiction and romance is very popular with library patrons, so librarians might want to purchase more than one copy. --Kathleen Hughes Copyright 2004 Booklist
More book reviews at iDreamBooks.com