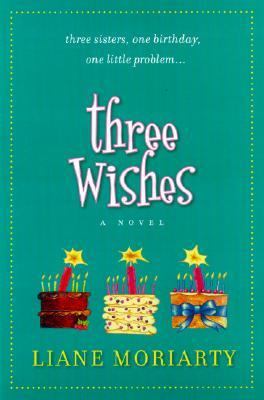 <p>A New York Times bestseller, Three Wishes is the funny, heartwarming and completely charming first novel from Liane Moriarty, also the author of #1 New York Times bestsellers The Husband's Secret and Big Little Lies.</p> <p>Lyn, Cat, and Gemma Kettle, beautiful thirty-three-year-old triplets, seem to attract attention everywhere they go. Together, laughter, drama, and mayhem seem to follow them. But apart, each is dealing with her own share of ups and downs. Lyn has organized her life into one big checklist, Cat has just learned a startling secret about her marriage, and Gemma, who bolts every time a relationship hits the six-month mark, holds out hope for lasting love. In this wise, witty, and hilarious novel, we follow the Kettle sisters through their tumultuous thirty-third year as they deal with sibling rivalry and secrets, revelations and relationships, unfaithful husbands and unthinkable decisions, and the fabulous, frustrating life of forever being part of a trio.</p>

Three chick-lit heroines are better than one in Moriarty's witty debut starring Sydney-based triplets Cat, Gemma and Lyn Kettle. Borrowing a convention from mystery novels, Moriarty opens with a prologue whose events must be explained through subsequent chapters: in this case, what led one sis to imbed a fondue fork in another sis's pregnant belly at their 34th birthday celebration dinner? Moriarty gleefully describes the triplets' turbulent previous year, which forces them to abandon the roles they've played since childhood. Sarcastic and abrasive marketing executive Cat must grapple with her husband Dan's affair, a miscarriage and a drinking problem, while flighty Gemma, a full-time house sitter, probes her fears of commitment when she meets charming locksmith Charlie. Lyn, a successful entrepreneur, wife and mother, has perfected the art of time management ("Sex with husband. Check"), but she's quietly seized by bouts of panic. Despite such unoriginal problems, Moriarty's novel is a winning combination of smart-alecky fun and feel-good mush (mostly the former). Her writing is smart and playful ("Death was the hot bath you promised yourself while you endured small talk and uncomfortable shoes"), her characters are quirky and lovable and her clever plot turns-like the rekindled love between the triplets' divorced parents-are fun. Convenient coincidences and a general predictability don't distract too much from the sassy pleasures. Agent, Faye Bender. (June) (c) Copyright PWxyz, LLC. All rights reserved

The Kettle sisters are a strange sight when they are together--a beautiful set of triplets, with two identical and one fraternal. Over the course of their thirty-third year, their lives all take turns no one could foresee. Lyn's perfectly scheduled and organized life begins to fray as debilitating panic attacks come on suddenly in parking lots; Cat, Lyn's identical twin, thinks her marriage is indestructible until her husband admits to having an affair with a young law student; and Gemma, who acts much younger than her sisters, goes from job to job and can't sustain a relationship with a man for longer than six months. Separately, they are strong, independent women struggling with divorce, pregnancy, parents, and jobs. Together, they are a force to be reckoned with as they fight with passion, laugh with gusto, and push each other to be their best selves. Moriarty's first novel, written with wisdom, humor, and sincerity, is an honest look at sisters who have a bond stronger than anything life throws their way. --Carolyn Kubisz Copyright 2004 Booklist

Meet the Kettle sisters: 33-year-old triplets. Gemma, Cat, and Lynne had the childhood from hell, thanks to their battling parents, and they still haven't decided what they want to be when they grow up--if they grow up. They haven't forgiven Mum and Dad and they can't forget, for example, their sixth birthday party, when their father lit a firecracker and blew his finger off (it was preserved in Formaldehyde as a gruesome memento of the occasion). How ironic: it was his ring finger--an apt symbol of an explosive marriage. Some years later, after their parents' divorce, the sisters leave home to confront hard truths about life and love. Family secrets and garden-variety troubles are trotted out in no particular order: Mum's miscarriage. Frail but feisty granny. Unfaithful husbands and useless boyfriends. Happy ending? Oh, why not. Sneering tone and choppy style mar this first novel, set in Sydney, from Australian author Moriarty. Copyright ©Kirkus Reviews, used with permission.
More book reviews at iDreamBooks.com