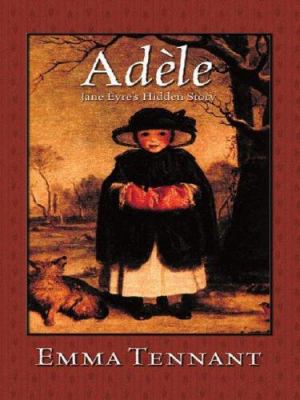 Following the success of "Scarlett" and "Rebecca's Tale, " this is the brilliant companion novel that captures the era and spirit of Charlotte Bronte's romantic classic, "Jane Eyre." Copyright © Libri GmbH. All rights reserved.

Why write an alternate version of a novel that is already complex and intriguing? Tennant, who tried to update Jane Austen's Pride and Prejudice in Pemberly and An Unequal Marriage, focuses on Adele Varens, the ward of Edward Rochester and pupil of Jane Eyre. Adele's life in Paris and tenancy at Thornfield Hall are revealed in chapters narrated by various characters, most often Adele or Edward. The possibility of a different demise for the unfortunate Bertha constitutes a major part of the plot. Tennant's book is too insubstantial to sustain interest in its plot or characters. If the reader's major concern is trying to recall how Blanche Ingram, Grace Poole, Mrs. Fairfax, and the rest fit together in the original, why not just reread Charlotte Bronte's novel itself? That experience would be more rewarding than slogging through this volume. [Or read Wide Sargasso Sea, Jean Rhys's classic take on Jane Eyre.-Ed.]-Kathy Piehl, Minnesota State Univ. Lib., Mankato (c) Copyright 2010. Library Journals LLC, a wholly owned subsidiary of Media Source, Inc. No redistribution permitted.

Seasoned sequel-writer Tennant (Pemberley; Sylvia and Ted; etc.) offers not so much a follow-up to Jane Eyre as a new perspective on its plot. She retells Bronte's romance from the perspective of the pampered but neglected Adele, Rochester's "ward" and Jane's pupil. Only eight years old when the novel opens, Adle is living blissfully in Paris with her mother, the celebrated trapeze artist and actress Celine Varens. Their cozy-if somewhat depraved-life is threatened by the sudden arrival of Rochester, an explosive alcoholic whispered to be her father. Rochester kills Celine's lover in a duel, then flees to England, while Celine flees to Italy, abandoning her daughter. Adele is sent to stay with Rochester at Thornfield Hall, where she is befriended by the witchy "etrangere" Antoinette (also known as Bertha). Soon Jane Eyre arrives, but the bratty Adele, still plotting the marriage of Maman and Papa, rejects her governess's "persistent banality." Adele's narration is an awkward attempt at Victorian prose ("That she had had affection for me, I cannot gainsay; but I had been for her a conduit to the greater profit of her master's love, and little more") sprinkled with occasional, mostly gratuitous French words ("I was dismissed without even trying on the robe of organdy"). But the real problem is Adele herself, whose haughtiness is merely unpleasant; she has none of the charm of Bronte's imp, let alone the charisma to anchor a whole book. Some diehard Jane Eyre fans may enjoy this variation, but purists are warned to stay away. Agent, Elaine Markson Literary Agency. (Jan.) (c) Copyright PWxyz, LLC. All rights reserved

A sequel to Charlotte Bronte's Jane Eyre, this novel is crafted in prose stylized to Bronte's specifications but stands on its own as a work of Victorian fiction. This novel centers on Adele, Jane Eyre's charge and the ward of the gloomy Edward Rochester. Adele has arrived at Thornfield Hall under contrived circumstances that have separated her from her mother, the promiscuous French trapeze artist and actress Cecile Varens, and brought her to Rochester's doorstep on the ominous English moors. The preadolescent Adele cannot fathom a lifetime in Yorkshire and yearns for her mother and their colorful life in the Parisian sunshine, but she cannot deny that the house calls to her and she ascends to the hidden room in the tower where the insane Mrs. Rochester lies in wait. Bronteleft enough loose threads to craft up some enticing Victorian Goth, but Tennant does not tie up Bronte's loose strings and instead chooses to take a direction of her own that might leave traditional Jane Eyre fans dissatisfied. --Elsa Gaztambide

After two sequels to Pride and Prejudice (Pemberley, 1993; An Unequal Marriage, 1994) and one to Emma (1998), Tennant retells Jane Eyre from the perspective of, mainly, Rochester's daughter Adele. The nice thing about being narrator is that it lets you look better than you might really be; and, if Adele Varens is to be believed, Jane Eyre was not the gracious soul she made herself seem. Adele, we recall, was the illegitimate daughter of Edward Rochester and Celine Varens, the Parisian actress and acrobat who was Rochester's great tragic love. Brought to England as a girl, when her mother abandoned her for an Italian musician, Adele (who had spent her childhood in the company of the greatest artists and actors of France) found life in the Rochester household unbearably dull and dreary-and looked down on her governess Jane as "this little, ill-educated nun." In chapters narrated by different characters, we discover that Rochester's family is an even greater nest of duplicity and madness than Brontk herself made it out to be. All Adele wants is to run back to the Continent and find her mother again-a normal enough sentiment, perhaps, except that Adele knows perfectly well her mother is dead. Rochester, meanwhile, detests himself for having murdered Celine's lover-but seems not too bothered about keeping his mad wife Bertha locked in a closet upstairs. Mrs. Fairfax, the housekeeper from hell, is trying to bump off Jane and Bertha alike so that Rochester can marry Blanche Ingram-an uncanny double of the young Bertha who may actually be Rochester's daughter. And Adele eventually learns that she has a twin brother who was fathered by another man. No, it's not the Addams family-just the dark underside of a Victorian one. Delightful may not be the word, but this is certainly lots of fun. Despite the odds, Tennant's story works perfectly, creating a genuine modern sequel to Brontk's tale that's neither a parody nor a cheap imitation.
More book reviews at iDreamBooks.com