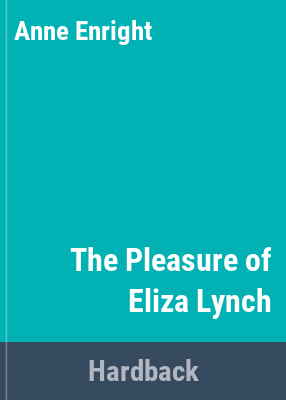 An historical epic, this novel is based on the true story of the beautiful Irishwoman Eliza Lynch, who, in the 1860's, became, briefly, the richest woman in the world.

More strange than stimulating, more grim than redeeming, this surrealistic historical novel by the Irish-born Enright (The Wig My Father Wore) will entertain only the most determined and forgiving readers. The story loosely re-creates the life of Eliza Lynch, an Irish prostitute who escaped social disgrace by attaching herself to Francisco Solano Lopez, future dictator of Paraguay, and traveling with him to his homeland as his paramour. Once there, Eliza sets herself up in a rich style that serves to separate her further from the country's impoverished and war-torn people. Eventually, conflict shatters Solano Lopez's plans for a totalitarian state made great by a railroad, and he is forced to flee with his army and an entourage that includes Eliza in her all-black carriage. Readers will be disorientated by the stream-of-consciousness narrative and the disjointed structure, which alternates time frame and point of view. Add to these drawbacks the author's penchant for overripe images of gluttony, putrefaction (e.g., the physical effects of gonorrhea, cholera, and typhus), and the baser traits of humanity, and the result is a nightmarish mix of Gabriel Garcia Marquez's Love in the Time of Cholera, Joseph Conrad's Heart of Darkness, and William Faulkner's works. Only larger collections of experimental literary fiction should consider. [Previewed in Prepub Alert, LJ 11/15/02.]-Jennifer Baker, Seattle P.L. (c) Copyright 2010. Library Journals LLC, a wholly owned subsidiary of Media Source, Inc. No redistribution permitted.

In a story that is as rich and exotic as its setting, Paraguay in the 1850s, Irish writer Enright's third novel envisions the life of the woman who became that country's Eva Peron. Eliza, extraordinarily beautiful, charming, and intelligent, meets Francisco Lopez, eldest son of the Paraguayan dictator then in power, in Paris, then goes home with him, pregnant with his child. Ostracized by her lover's family, indeed by all of the local society, Eliza survives in a grand manner and becomes both greatly admired for her kindness and reviled for what is presumed to be her political sway. Enright matches Eliza's narration with that of Stewart's, an alcoholic doctor brought from Europe to the wilderness to tend to Eliza during childbirth, thus providing a diversity of voice and point of view that much enhances the tale. With a style vastly unlike that of her two previous novels, Enright artfully explores the power of beauty and the beauty of power, and finds them remarkably similar as neither leads to a good end. Danise Hoover

Irish author Enright's lush third novel is a real departure from its predecessors (What Are You Like?, 2000; The Wig My Father Wore, 2001): bleak, blunt studies of lonely women seeking familial and romantic connection. This time, the eponymous heroine's insatiable hunger to experience and possess make her an unstoppable feminine force: a Paraguayan Eva Peron (Enright's Eliza being in fact based on a real historical figure). The story begins in 1854 when 19-year-old Eliza, a physician's daughter on the rebound from an aborted marriage to a French surgeon, encounters Spanish railroad builder Francisco Solano L-pez. He quickly supplants her several previous lovers, and the pregnant Eliza travels with L-pez as his mistress to the Paraguayan capitol of Asuncion. There, he confronts the Catholic Church over the issue of her bastard son's christening; goads Francisco (always referred to her as her "dear friend") into becoming Paraguay's ambitious, warmongering dictator; establishes a national theater and endears herself to her adopted country's multitudes; and fascinates every male who wanders into the orbit of her rapacious beauty and vitality. Enright's approach isn't subtle: every chapter title denotes an object ("Veal," "Champagne," "Coffee," etc.) related to Eliza's progress, and the nature of her ineffable appeal is explicitly spelt out ("When a man is inside a woman, he rules the world"). But the tale consistently engages and entertains, and Enright sets up numerous interesting echoes and parallels by way of its unusual dual structure, in which Eliza's own narrative of her exploits is confined to her early years (1854-5) in Paraguay, and successive later years are chronicled in chapters presented from the viewpoint of Scotsman William Stewart, L-pez's alcoholic personal physician (and another of Eliza's many conquests). A stylish account of the rise (she never actually falls) of a Latin American Moll Flanders-and a further step in Enright's increasingly promising career. Agent: Heather Schroeder/ICM
More book reviews at iDreamBooks.com