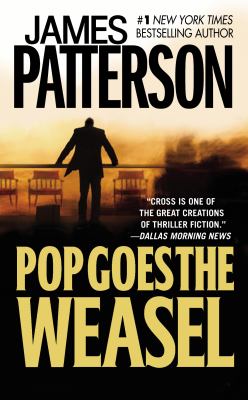 Detective Alex Cross is in love, but in Washington D. C. he must face a villain he will never forget.
Alex Cross is happy, but his happiness is threatened by a series of chilling murders-murders with a pattern so twisted, it leaves investigators reeling. Cross's ingenious pursuit of the killer produces a suspect: a British diplomat named Geoffrey Shafer.
But proving that Shafer is the murderer becomes a potentially deadly task. As the diplomat engages in a brilliant series of surprising countermoves, in and out of the courtroom, Alex and his fiancée become hopelessly entangled with the most memorable nemesis Alex Cross has ever faced.
Pop Goes the Weasel reveals James Patterson at the peak of his power. Here is a chilling villain no reader will forget, a love story of great tenderness, and a plot of relentless suspense and heart-pounding pace. To read Pop Goes the Weasel is to discover why James Patterson is one of the world's greatest suspense writers.

A serial killer unleashes a reign of terror in Washington against black women. Detective Alex Cross goes after him and discovers a British embassy official who masquerades as a black taxi driver to lure his victims.

Alex Cross, last seen in Cat & Mouse, returns in Patterson's best book to date. With his fiance, Christine, by his side, Alex has regained the happiness he lost. He can't stay happy for long, of course, and his nemesis this time is Geoffrey Shafer, the Weasel. Shafer is a British diplomat who lives a secret life; he murders people during a fantasy game he plays with three other men around the globe. Alex doesn't know it, but he and the people he cares about are the newest pawns in the game. Even with implausible situations and an absurdly evil villain, the book is impossible to put down. Patterson has another guaranteed best seller on his hands, and fans will be clamoring for the next Alex Cross adventure.ÄJeff Ayers, Seattle P.L. (c) Copyright 2010. Library Journals LLC, a wholly owned subsidiary of Media Source, Inc. No redistribution permitted.

Patterson dedicates his latest (after 1998's When the Wind Blows) to "the millions of Alex Cross readers who so frequently ask `Can't you write faster?'" Those readers won't be disappointed: the successful formula is in high gear, with the Washington, D.C., psychologist/homicide detective up to his ears in unsolved murders. This tale features a duplicitous villain, a glut of dirty office politics and the inevitable threat to someone Cross just can't live without. A highly moral character, Cross is now firmly rooted in many imaginations as Morgan Freeman, who played him in the film version of Kiss the Girls. When he's not caring for Damon and Jannie, his two young children, Cross takes boys to visit their fathers in prison and works in a soup kitchen. After his boss, Chief Pittman, refuses to believe that a serial killer is striking in the neglected Southeast section, Cross and four other officers work extra hours on their own, the only ones who really care. Readers learn early on that the killer is a British diplomat, Geoffrey Shafer, a chilling madman ostensibly holding his sanity together with drugs. Shafer is obsessed with a real-life version of a computer game called the Four Horsemen, during which he masquerades as a taxi driver who kills his unsuspecting passengers. If Shafer is almost too good to be trueÄanother fictional psychopath with infinite resourcesÄPatterson is shrewd enough to show him making mistakes (like forgetting to wash) as he comes apart at the seams. The killer is caught in the middle of the narrative, setting the scene for a bold courtroom drama. Even the disappearance of Cross's new lady love (his wife was killed in a previous book) is less of a clichd device than a ritual sacrifice as Patterson's well-oiled suspense machine grinds away with solid precision. 1 million first printing; $1 million ad/promo; 14-city author tour; Time Warner audio. (Oct.) (c) Copyright PWxyz, LLC. All rights reserved

There are few better than Patterson when it comes to spooky, scary plots and sinister, evil characters, even though his writing sometimes seems strained. In his latest macabre thriller, Patterson pits his popular hero, D.C. psychologist and cop Alex Cross, against his most fiendish villain yet. Cross is working on a series of Jane Doe murders in southeast Washington. His hard-nosed boss doesn't want to waste precious resources investigating the deaths of a bunch of "worthless prostitutes and druggies," but Cross is convinced the women are the victims of a particularly deadly serial killer. He's right, of course, and he nearly meets his match in Geoffrey Shafer, respectable British Embassy staffer by day, homicidal maniac by night. Shafer and three of his pals, all former assassins for Britain's MI6, are engaged in a deadly game called the Four Horsemen, a computer exercise in which they act out their most violent fantasies. But Shafer has turned fantasy into reality. After more than 400 pages of high-octane action, Patterson serves up a shocker of a finish that will have readers checking their locks twice. With a promised million-copy first printing and the usual mega-publicity, Patterson and his latest thriller are headed for their old stomping grounds--the top of the best-seller lists. --Emily Melton

After a flight in fantasy with When the Wind Blows (1998), Patterson goes to ground with another slash-and-squirm psychokiller page-turner, this one dedicated to ``the millions of Alex Cross readers, who so frequently ask, can't you write faster?'' By day, Geoffrey Shafer is a charming, 42-year-old British Embassy paper-pusher with a picture-perfect family and a shady past as an MI-6 secret agent. Come sundown, he swallows a pharmacy of psychoactive pills, gulps three black coffees loaded with sugar, and roams the streets of Washington, D.C., in a battered cab, where, disguised as a black man, he rolls dice to determine which among his black female fares he'll murder. Afterwards he dumps his naked victims in crime-infested back alleys of black- slum neighborhoods, then sends e-mails boasting of his accomplishments to three other former MI-6 agents involved in a hellish Internet role-playing game. ``I sensed I was at the start of another homicide mess,'' sighs forensic-psychologist turned homicide-detective Alex Cross. Cross yearns to catch the ``Jane Doe murderer'' but is thwarted by Det. Chief George Pittman, who assigns sexy Det. Patsy Hampton to investigate Cross and come up with a reason for dismissing him. Meanwhile, Cross's fiance is kidnaped during a Bermuda vacation, and an anonymous e-mail warns him to back off. He doesn't, of course, and just when it appears that Patterson is sleep-walking through his story, Cross nabs Shafer minutes after Shafer kills Det. Hampton. During the subsequent high-visibility trail, Shafer manages to make the jury believe that he's innocent and that Cross was trying to frame him. When all seems lost, a sympathetic British intelligence chief offers to help Cross bring down Shafer, and the other homicidal game-players, during a showdown on the breezy beaches of Jamaica. Kinky mayhem, a cartoonish villain, regular glimpses of the kindly Cross caring for his loved ones, and an ending that spells a sequel: Patterson's fans couldn't ask for more. (First printing of 1,000,000; $1,000,000 ad/promo; author tour; radio satellite tour)
More book reviews at iDreamBooks.com