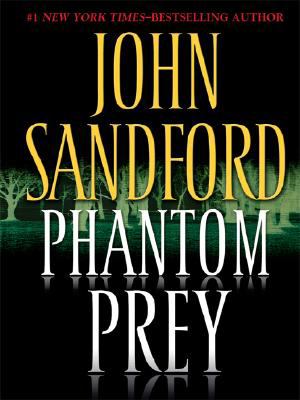 In bestseller Sandford's solid 18th Prey novel (after Invisible Prey), Minnesota Bureau of Criminal Apprehension agent Lucas Davenport, who's received numerous promotions in the course of the series, ought to be taking the desk aspects of his job more seriously. But the man remains more comfortable working a stakeout, interviewing suspects and taking down bad guys than he is filling out personnel evaluation forms on his staff--which explains why he's still getting shot at, peeping at a cocaine dealer's wife hoping for a glimpse of her husband and, at his wife's behest, looking into the unsolved kidnapping and presumed murder of a wealthy young woman into the goth scene. It becomes clear that a serial killer is targeting goths as well as anyone, including Lucas, who gets in the way. While some pretty murky psychology encumbers the plot, Sandford delivers the kind of riveting action that keeps thriller fans turning the pages. (May) (c) Copyright PWxyz, LLC. All rights reserved

Frances Austin is a missing heiress. Traces of blood in her well-connected mother Alyssa's home lead Lucas Davenport, head of Minnesota's Bureau of Criminal Apprehension, to assume the worst, but without a body, he can't be sure. The investigation centers on Frances' involvement in the Twin Cities' goth community. The goths' collective obsession with death and darkness makes them an obvious starting point, but Davenport believes it's a form of youthful angst rather than an inherently evil social trend. But when other young goths connected to Frances are murdered, Davenport is forced to rethink his theory. Like all good investigators, he follows the money, in this case, a $50,000 withdrawal from Frances' account and its subsequent disbursement over a 20-day period preceding Frances' disappearance. When Davenport is wounded coming out of a goth club after conducting a series of background interviews, he realizes he's closing in on the killer but has no idea who or why. The eighteenth entry in the best-selling Prey series is Sandford's usual mix of clever plotting, gallows humor, and explosive action, but this time he mixes in a bit of the seemingly supernatural. Davenport doesn't realize it and neither will readers but he's actually working on two cases. The solution to one is mundanely tragic; the second genuinely disturbing. Expect another trip to the best-seller lists for one of the most consistently entertaining crime writers working today.--Lukowsky, Wes Copyright 2008 Booklist

Lucas Davenport goes after a clever, ruthless killer hiding in plain sight. Widowed heiress Alyssa Austin, a former athlete who owns a string of athletic clubs, comes home one night to find her daughter Frances missing, with bloody signs of foul play. The Minnesota Bureau of Criminal Apprehension soon learns that Frances, a Goth girl who inherited $2 million from her father, withdrew $50,000 from her bank account recently. Where did Frances and the money go? While Lucas and his teammates try to track the cash or any goods or services Frances might have purchased, more bodies pile up: a bartender friend of Frances, a buddy of his who works at a liquor store, a Goth realtor. Lucas doesn't know that these aren't victims of Frances's killer but of an unlikely pair bent on avenging Frances: a spectral Goth who calls herself Fairy and Loren, her lover and confederate--their partnership is perhaps a bit too indebted to the felonious duo of Invisible Prey (2007). Sandford enlivens the crosscutting between cops and killers by giving Lucas another job: staking out pregnant Heather Toms while she waits for her husband, dangerous drug dealer Siggy Toms, to come back from Florida for her. This second gig would be a lot more tedious if Heather didn't keep changing her clothes without bothering to lower the blinds. Of the many obstacles that keep Frances's murder open, the most interesting is the news that her avenger is a figure close to the investigation who can disperse disinformation and still pass unsuspected among the authorities. The use of multiple-personality disorder to explain away murderous motives is both gratuitous and unconvincing, and it's no surprise when the most exciting sequence is provided by the Heather Toms subplot. As usual, there are lots of moves by both good guys and bad, but this time the moves seem old and forced. Copyright ©Kirkus Reviews, used with permission.
More book reviews at iDreamBooks.com