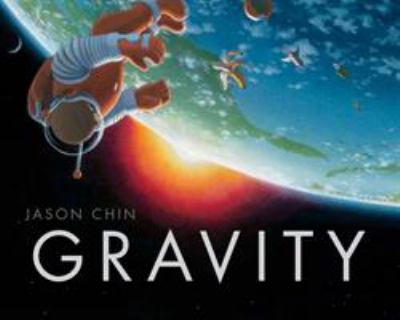 What keeps objects from floating out of your hand? What if your feet drifted away from the ground? What stops everything from rising up into space? Gravity. In this unusual, innovative, and beautiful book, Jason Chin introduces young readers to this fundamental force, taking a complex subject and making it understandable. The perfect book for all young scientists.

What keeps objects from floating out of your hand? What if your feet drifted away from the ground? What stops everything from rising up into space?

What keeps objects from floating out of your hand? What if your feet drifted away from the ground? What stops everything from rising up into space? Gravity. In this unusual, innovative, and beautiful book, Jason Chin introduces young readers to this fundamental force, taking a complex subject and making it understandable. It is the perfect book for all young scientists.

Chin (Island) takes his exceptional artistic gifts into outer space, painting with disciplined exuberance a series of spreads that explain the fundamentals of gravity. A boy playing at the beach is startled when a book-a copy of this book, alert readers will note-falls from the sky and lands in front of him. The all-caps text reads like a series of booming declarations: "Without gravity, everything would float away." On cue, the boy, his spaceman doll and rocket, and the very grains of sand on the beach lift slowly off the ground. The next page shows the whole lot drifting upward like a tide of debris into space. Chin does some David Wiesner-style visual punning as the pages of the boy's book-illustrated with paintings of a massive, fiery sun exerting force on a tiny Earth and moon-do double duty as both an object affected by gravity and an explanation of how it works. In his embrace of the wild possibilities of a world without gravity, Chin outdoes himself. An illustrated afterword provides additional explanations of mass, matter, and force. Ages 5-8. (Apr.) (c) Copyright PWxyz, LLC. All rights reserved.

Gr 2-5-How do we stay put on our planet and not float away into outer space? What makes things fall to the ground from high places? Chin introduces youngsters to the concept of gravity, presenting the information in highly understandable language and in captivating paintings that will delight young readers. Deceptively simple large print text describe how gravity affects all things on Earth as well as in outer space. Colorful and incredibly detailed watercolor landscapes and close-up illustrations keep readers' attention, and certain objects are repeated throughout the pages. Although Gravity is set up like a fictional text, the information necessary to understand the basics of gravity are present. This is a wonderful addition to libraries for younger students. In the "More About Gravity" section, readers can add to their increasing knowledge of the topic with important vocabulary and comparisons that allow for deeper understanding.-Katy Charles, Virgil Elementary School, Cortland, NY (c) Copyright 2014. Library Journals LLC, a wholly owned subsidiary of Media Source, Inc. No redistribution permitted.

A book on gravity falls onto a beach where a boy is playing with his toy astronaut and spaceship. Suddenly without gravity, everything (except the boy, who clutches an outcropping of rock) starts rising into the air and floating off into space. In the end, because everything has gravity, the objects fall back to earth, but the boy's possessions end up at a lemonade stand, while a pitcher of lemonade and cups land near him. As in Chin's Redwoods (2009) and Coral Reefs (2011), an informational text is paired with imaginative and often striking illustrations. But here, the text is quite brief, and the term gravity is explained only in the appended notes. While the main section of the book illustrates a lack of gravity in memorable ways, it does little to make the concept of gravitational pull more understandable to children. Teachers will find Franklin Branley's Gravity Is a Mystery (2007) more useful, but Chin's picture book will be an attractive addition to classroom units. A visually impressive piece of storytelling, it will please kids who enjoy what-if scenarios.--Phelan, Carolyn Copyright 2014 Booklist

The jacket's fortuitous resemblance to the poster for the 2013 movie of the same name shouldn't hurt this book's chances, and, like the film, its images of space and the objects floating or falling therein are hypnotically arresting. However, the science here is unfortunately simplified to the point of inaccuracy. Despite the text's assertion, objects, whether the sun or a banana, do not "have gravity"; they have mass (which affects gravity). And to say "without gravity, everything would float away" misses the rather more essential point that without gravity there would be no anything to float anywhere. The appended "More About Gravity" provides fuller explanations, if you can pull -- ha! -- kids away from the sublime illustrations to read it. roger sutton (c) Copyright 2014. The Horn Book, Inc., a wholly owned subsidiary of Media Source, Inc. No redistribution permitted.

After stunning explorations of the Galpagos Islands and California's redwoods, Chin turns literally high-concept for a study of gravity's pull. "Gravity // makes / objects // fall / to Earth." This big idea spans three double-page spreads, as (in a bit of metafictive fun) the very book in hand falls to Earth. It lands on a beach, where a brown-skinned boy plays with space toys, a half-peeled banana waiting nearby. What would happen without gravity? Chin ponders this visually, as (with the boy clinging to a rock) the book and toys soar into space to comingle, mysteriously, with the trappings of a lemonade stand. A series of panels goes even broader-concept, as shifts in perspective show the moon drifting away from the Earth and Earth untethered from the sun's pull. The text tackles the role of mass in gravity's relative force before rejoining the central visual arc by echoing the first sentence. That array of objectsbeach ball, toy rocket, now-mottled bananarains down on a group of Caucasian girls, who marvel at the sudden shower. Clearly, it's their lemonade stand that's endured Chin's mischievous dabble with anti-gravity, as on the final spread, the boy juggles a sploshing pitcher, lemons and paper cups on the surrounding sand. With an elegant, spare text and playful, daring pictures, Chin's latest opus exerts a powerful pull all its own. ("More about Gravity," bibliography) (Informational picture book. 5-9)]] Copyright Kirkus Reviews, used with permission.
More book reviews at iDreamBooks.com