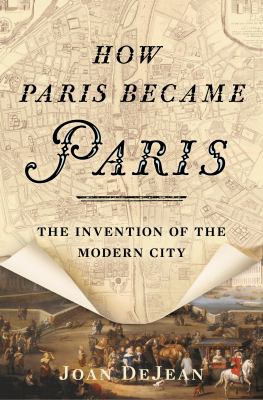 How Paris became Paris : the invention of the modern city / Joan DeJean.

At the beginning of the seventeenth century, Paris was known for isolated monuments but had not yet put its brand on urban space. Like other European cities, it was still emerging from its medieval past. But in a mere century Paris would be transformed into the modern and mythic city we know today.

Though most people associate the signature characteristics of Paris with the public works of the nineteenth century, Joan DeJean demonstrates that the Parisian model for urban space was in fact invented two centuries earlier, when the first complete design for the French capital was drawn up and implemented. As a result, Paris saw many changes. It became the first city to tear down its fortifications, inviting people in rather than keeping them out. Parisian urban planning showcased new kinds of streets, including the original boulevard, as well as public parks and the earliest sidewalks and bridges without houses. Venues opened for urban entertainment of all kinds, from opera and ballet to a pastime invented in Paris, recreational shopping. Parisians enjoyed the earliest public transportation and street lighting, and Paris became Europe's first great walking city.

A century of planned development made Paris both beautiful and exciting. It gave people reasons to be out in public as never before and as nowhere else. And it gave Paris its modern identity as a place that people dreamed of seeing. By 1700, Paris had become the capital that would revolutionize our conception of the city and of urban life.

Introduction: "Capital of the universe" -- The bridge where Paris became modern: the Pont Neuf -- "Light of the City of Light": the Place des Vosges -- "Enchanted island": the Ile Saint-Louis -- City of revolution: the Fronde -- The open city: the boulevards, parks, and streets of Paris -- City of speed and light: city services that transformed urban life -- Capitale de la mode -- City of finance and new wealth -- City of romance -- Conclusion: Making the city visible: painting and mapping the transformation of Paris.

"Capital of the universe" -- The bridge where Paris became modern : the Pont Neuf -- "Light of the City of Light" : the Place des Vosges -- "Enchanted island" : the Île Saint-Louis -- City of revolution : the Fronde -- The open city : the boulevards, parks, and streets of Paris -- City of speed and light : city services that transformed urban life -- Capitale de la mode -- City of finance and new wealth -- City of romance -- Making the city visible : painting and mapping the transformation of Paris.

In this compelling portrait of a city in transition, Joan DeJean shows that by 1700 Paris had become the capital that would transform forever our conception of the city and of urban life.

Although 19th-century Baron Haussmann often receives credit for Paris's iconic features, this witty and engaging work shows that it was the 17th-century Bourbon monarchs who first transformed Paris into the prototype of the modern city that would inspire the world. Penn professor DeJean (The Essence of Style) notes that Henri IV (1553-1610) was the first to consider the practical value of public works and how they could improve people's lives. Besides centralizing France's administrative functions, Henri IV built the first bridge to cross the Seine in a single span (the Pont Neuf) and the first urban public square (the Place Royale, now the Place des Vosges). Louis XIV took his grandfather's plans even further by tearing down the city's fortifications, replacing them with tree-lined boulevards around the city's perimeter, and instituting a "grand design" that would influence Haussmann 250 years later. A charismatic and knowledgeable narrator, DeJean shows how an open city where men and women from all stations could congregate fueled the rise of the self-made man, the financier, the real estate developer, the artisan, the merchant, the Parisienne, and the coquette. With panache and examples from primary sources, guidebooks, maps, and paintings, she illustrates how Paris changed people's conception of a city's potential. B&w illus., 8-page color insert. Agent: Alice Martell, the Martell Agency. (Mar.) (c) Copyright PWxyz, LLC. All rights reserved.

Within a century after the medieval period, Paris had moved beyond the old model of a scattering of village dwellings behind fortified walls to become a well-planned urban space of public parks, boulevards, street grids, street lighting, public transportation, and modern bridges. As early as the 1600s, Henry IV and his successors Louis XIII and Louis XIV set in motion the design for a city that would incorporate the arts, entertainment, commerce, and government in the capital city, facilitating the whole life of Paris citizens. With public spaces that encouraged social interchange, with both the high-born and the low-born circulating together, picking up on gossip, new ideas, and fashion trends, Paris became one of Europe's first great walking cities. French literary and cultural scholar DeJean details the planning behind the Pont Neuf, the Louvre, and other iconic sights as she offers a historical perspective on the forces that created Paris and led the way to a new conception of urban living. Maps and drawings add to the appeal of this engaging history of the growth of Paris into a modern city.--Bush, Vanessa Copyright 2010 Booklist

Illuminating portrait of the first modern city, 17th-century Paris, which could "hold a visitor's attention with quite different splendors." DeJean (Romance Languages/Univ. of Pennsylvania; The Age of Comfort: When Paris Discovered Casual--and the Modern Home Began, 2009, etc.) focuses on two kings, Henry IV and his grandson, Louis XIV, who lived 250 years before Baron Haussmann, the great public works leader who massively renovated Paris during the mid-1800s. When the author examines how the Pont Neuf, completed in 1607, was the key to the birth of the city, readers will immediately understand why it was designed and constructed there. Crossing the Seine at the le de la Cit, it included the first sidewalks anywhere, and it was the first bridge in Paris to offer a gathering place with a view of the river. Suddenly, ladies and gentlemen were out promenading, seeing and being seen. Adding Place des Vosges (originally a silk factory) and the mansions on le Saint-Louis gave the population the first true neighborhoods. People-watching on the streets raised awareness of fashion and introduced various forms of communication, as well as the first forms of advertising. Pedestrians began to shop using the first shopping guide, printed in 1690. Of course, thievery rose with the presence of the elite, so the first street lighting was installed. Since there was light, the shops stayed open well into the evenings--hence, the "city of light." Both Henry and Louis built central Paris in just over 100 years, and we can still walk and explore what they left for us. "Paris caused urban planners to invent what a city should be," writes the author, "and it caused visitors to dream of what a city might be." Dejean obviously knows and loves Paris, and she provides coherent history that effectively explains the evolution of a city built by a few prescient men.]] Copyright Kirkus Reviews, used with permission.
More book reviews at iDreamBooks.com