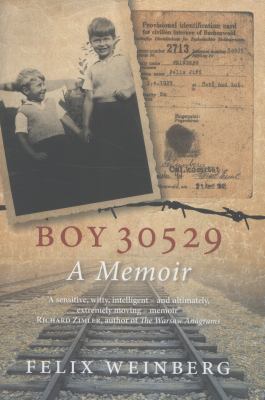 Anyone who survived the extermination camps must have an untypical story to tell. Furious at all the self-righteous, generic Holocaust stories, Weinberg looks back with no heroics at his experience as a young teen in the Prague roundups, the transports, the camps (including Auschwitz, Terezin, and Buchenwald), the death marches, the traumatic Allied bombing, and, finally, liberation. Now an eminent scientist in London, he is always haunted by those who did not survive, and readers will keep going back to the heartbreaking, small cover photo of his adoring little brother, who died in the gas chambers, as did their mother. Told with an honest, contemporary, sometimes wry viewpoint, Weinberg's graphic memories are haunting, as he searches the Web and historical archives to find out now what he did not know then, while it was happening to him: where he was marching, how many died. The dual perspective, then and now, and the blend of family intimacy (including occasional photos) with the gripping, authoritative historical overview make this an essential title for discussion.--Rochman, Hazel Copyright 2010 Booklist

An unusually good-natured memoir about life in the Nazi camps and the travails of being a postwar refugee. Weinberg, now a British physicist, had not planned to write a memoir, until a spate of well-publicized fake Holocaust survivor memoirs came out a few years ago. He does no specific debunking here but instead writes from the point of view of a privileged young man, barely a teenager, whose natural mode is playfulness, not meditation, and who has a quick, curious mind. Born into a Jewish family that also celebrated Christmas--the good timing of his brother's birth, he writes, "brought me a three-year extension of Christmases" before the Nazis came into his native Czechoslovakia. On the Nazis, Weinberg waxes sardonic: He writes, for example, that Heinrich Himmler began the program of medical experimentation in the camps after failing to breed chickens successfully enough to make a living as a poultry farmer. "The most inventive of satirists could not have invented that one," he writes. "It would be hilarious were it not for the millions of lives lost." Weinberg does allow that the Nazis had one good idea, namely throwing him out of school and putting an end to "the only conventional school education I ever had." Sent to Terezin and then Buchenwald, Weinberg endured long enough to see, most satisfyingly, the liberation of the camps by black American soldiers--and just in time, since the prisoners were bent on hanging their SS guards, who departed so quickly that "they left their uniforms and weapons in the barracks for us to play with." Minor, perhaps, but a revelation all the same, told with both candor and odd innocence.]] Copyright Kirkus Reviews, used with permission.
More book reviews at iDreamBooks.com