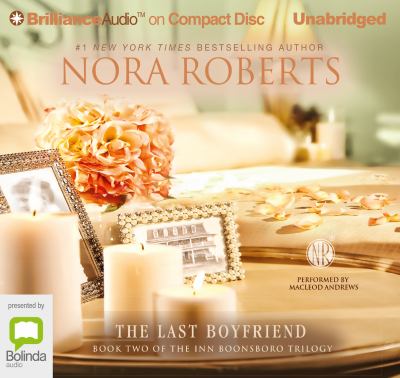 | Boonsboro (Md.) -- FictionGenre/Form: Audiobooks. | Romance fiction.DDC classification: 813.54 Performed by MacLeod Andrews.Summary: The historic hotel in Boonsboro, Maryland, has endured war and peace, changing hands, even rumored hauntings. Now it's getting a major facelift from the Montgomery brothers and their eccentric mother. Owen is the organizer of the Montgomery clan, running the family's construction business with an iron fist, and an even less flexible spreadsheet. And though his brother's give him grief for his compulsive list masking, The Inn Boonsboro is about to open right on schedule. The only thing Owen didn't plan for was Avery MacTavish.
Tags from this library: No tags from this library for this title. Log in to add tags.
Fiction notes: Click to open in new window

The historic hotel in Boonsboro has endured war and peace, the changing of hands, and even rumoured hauntings. Now it's getting a major facelift from the Montgomery brothers and their eccentric mother. As the architect in the family, Beckett's social life consists mostly of talking shop over pizza and beer. But there's another project he's got his eye on: the girl he's been waiting to kiss since he was sixteen.

After losing her husband and returning to her hometown, Clare Brewster soon settles into her life as the mother of three young sons while running the town's bookstore. Though busy and with little time for romance, Clare is drawn across the street by Beckett's transformation of the old inn, wanting to take a closer look ... at both the building and the man behind it.

The historic hotel in Boonsboro, Maryland, has endured war and peace, changing hands, even rumored hauntings. Now it's getting a major facelift from the Montgomery brothers and their eccentric mother. Owen is the organizer of the Montgomery clan, running the family's construction business with an iron fist, and an even less flexible spreadsheet. And though his brother's give him grief for his compulsive list masking, The Inn Boonsboro is about to open right on schedule. The only thing Owen didn't plan for was Avery MacTavish.

Friends from when five-year-old Avery MacTavish claimed Owen Montgomery as her first boyfriend (complete with first kiss and pink plastic engagement ring), the two now enjoy a casual, siblinglike relationship-until Inn BoonsBoro's resident ghost, Lizzy, takes matters into her own hands and literally throws them together. But energetic, risk-taking restaurateur Avery and superorganized construction company manager Owen aren't sure they want their lives turned upside down. Though the entire Montgomery clan knows the couple are oh-so-right for each other, it takes the independent, marriage-wary pair a while to figure out that sometimes a first relationship can also be the last. Verdict Lively, funny, and rife with wonderfully complex family dynamics and characters you can't help but love, this heartwarming story brings another couple together and the inn's renovation closer to completion while revealing a bit more about the inn's romantic, unquiet ghost. Note: Although each book in the trilogy stands on its own, because of the ongoing ghostly mystery, fans will want to read them in order, beginning with The Next Always; The Perfect Hope is due in November. Roberts (The Witness) lives in Keedysville, MD, a stone's throw from the Civil War town of Boonsboro and the historic Inn BoonsBoro.-Kristin Ramsdell, Libn. Emerita, California State Univ., East Bay (c) Copyright 2012. Library Journals LLC, a wholly owned subsidiary of Media Source, Inc. No redistribution permitted.

Roberts' newest addition to her enormous body of work (after The Next Always: Book One of the Inn BoonsBoro Trilogy) fails to uphold the dictum that practice makes perfect-or at least makes better. Though Roberts has authored over 200 books, this second installment in the Inn BoonsBoro Trilogy falls flat. Owen Montgomery is responsible for seeing to it that the titular inn-recently restored by Owen and his brothers, Beckett and Ryder-opens on time. But then again, he wasn't planning on being sidetracked, especially by an old flame. Avery McTavish claims Owen as her first boyfriend, no matter that she was five years old at the time. Now Owen is determined to rekindle their love and make sure he's the last boyfriend she ever has. Helped along by the Inn's resident ghost, Owen's plan may work out in his favor, but a contrived plot and clinical romance leaves readers plodding along without excitement or seduction. Redeemed only by the mature manner in which the main characters handle their problems, this book is best left for the die-hard Roberts fans. (May) © Copyright PWxyz, LLC. All rights reserved.

Owen Montgomery is all about details, and continually keeping on track and ontop of things is what makes him so good at his job. Owen's brother Beckett might be the design genius of Montgomery Family Contractors, and his brother Ryder might be able to build anything, but the family business would be lost without Owen's gift for making sure that all of the company's projects, including their current renovation and restoration of the old inn in Boonsboro, run smoothly. Up until now, Owen has planned every aspect of his life, and those plans do not include becoming romantically involved with Avery McTavish. But after sharing one kiss with Avery, Owen discovers even the most carefully constructed plan can change. In the second expertly crafted installment of her Inn Boonsboro Trilogy (The Next Always, 2011), Roberts drops a few more clues about the ghostly presence that haunts the Inn Boonsboro, while fashioning a splendidly sexy romance that delivers a knockout combination of engaging writing, tart humor, and realistically complicated characters with whom readers can easily relate. HIGH-DEMAND BACKSTORY: Stock up: the ever-popular Roberts continues her latest reader-pleasing series.--Charles, John Copyright 2010 Booklist
More book reviews at iDreamBooks.com