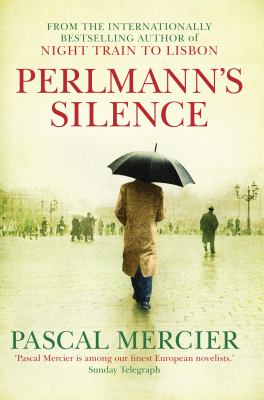 From the internationally bestselling author of 'Night Train to Lisbon' comes a compelling novel about one man's attempt to extricate himself from his featureless existence and find a life of passion and danger.

It would be simplistic to describe this novel by Swiss author Mercier (Night Train to Lisbon) as one man's journey into the hellmouth of plagiarism, and yet one must. A distinguished professor of linguistics, Phillip Perlmann is in Italy presiding over a five-week seminar with six international colleagues; another colleague, Russian linguist Leskov, is missing because his exit visa has been denied. Having recently lost his wife, Perlmann has little interest in his work and is unable to produce his own material, so he spends his days obsessively translating Leskov's work into English. As his turn to lecture draws near, Perlmann impulsively turns to Leskov's text, only to be overwhelmed with panic at the realization that he has committed plagiarism. Then it's announced that Leskov is coming after all. VERDICT If only our students took plagiarism as seriously as Phillip Perlmann does-or maybe not. For such an intensely internal novel, with most of the action occurring in Perlmann's head, there is a good deal of suspense in the latter half. It is far too wordy to keep readers on the edge of their seats, but those willing to engage with the text will be pleased they did.-Pamela Mann, St. Mary's Coll. of Maryland Lib. (c) Copyright 2011. Library Journals LLC, a wholly owned subsidiary of Media Source, Inc. No redistribution permitted.

Philosophy professor Mercier's second novel, originally published in Germany in 1995, explores depression and the desperation born of procrastination. Philipp Perlmann, a prominent professor and linguist, is in charge of a monthlong academic conference at a retreat outside the seaside town of Rapallo, Italy. Each participant must debut a new theory, and Philipp-paralyzed with ennui and writer's block-relies on sleeping pills, a local trattoria, and his memories as means of escape. Then, after translating a Russian colleague's manuscript, Philipp decides to pass it off as his own to meet the conference deadline. When the colleague unexpectedly decides to join the group, Philipp takes extraordinary measures to protect his secret. Unfortunately, as readers journey through his cowardice and deteriorating mental state-and the novel's endless exposition-Philipp proves both unreliable and unlikable. Even more introspective than Night Train to Lisbon, Mercier has allowed his protagonist's rumination to bury the novel's other elements. (Jan.) (c) Copyright PWxyz, LLC. All rights reserved.

*Starred Review* Invited to speak at an international conference, renowned linguist Philip Perlmann finds himself so paralyzed by grief over his wife's recent death that he can scarcely write a word. When he solves his problem by plagiarizing from a manuscript by a brilliant foreign colleague, he finds himself trapped in an impossible dilemma after the colleague unexpectedly decides to attend the conference. Mercier draws his readers into this dilemma in a narrative taut with lethal intentions, rich with literary and linguistic implications. The implications intensify as Perlmann weighs every syllable exchanged with his now-threatening but still naive and trusting colleague, striving to keep his scholarly theft hidden, his reputation unscathed, yet hating his own deviousness. As they share agonizing days with the protagonist, readers plumb the depths of a mind endowed with rare power, a heart lacerated by tempestuous emotions. On the tightrope Perlmann walks balancing guilt with self-justification, perilous dangers with desperate hopes readers gain a perspective on how words unite and divide their speakers, how meanings and motives metamorphose in crossing the boundary of translation. That Mercier's own acclaimed novel has itself traversed the boundary from German to English thanks to the gifts of translator Whiteside will occasion considerable gratitude among American readers.--Christensen, Bryce Copyright 2010 Booklist