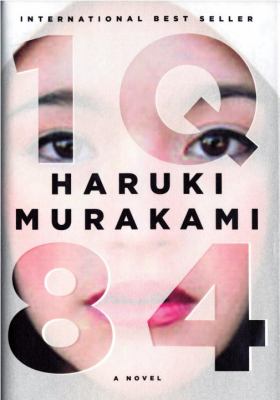 1Q84 / Haruki Murakami ; translated from the Japanese by Jay Rubin and Philip Gabriel.

DDC classification: 895.6/35 Summary: An ode to George Orwell's "1984" told in alternating male and female voices relates the stories of Aomame, an assassin for a secret organization who discovers that she has been transported to an alternate reality, and Tengo, a mathematics lecturer and novice writer.
Tags from this library: No tags from this library for this title. Log in to add tags.
Fiction notes: Click to open in new window

"Murakami is like a magician who explains what he's doing as he performs the trick and still makes you believe he has supernatural powers . . . But while anyone can tell a story that resembles a dream, it's the rare artist, like this one, who can make us feel that we are dreaming it ourselves." -- The New York Times Book Review
nbsp;
The year is 1984 and the city is Tokyo.

A young woman named Aomame follows a taxi driver's enigmatic suggestion and begins to notice puzzling discrepancies in the world around her. She has entered, she realizes, a parallel existence, which she calls 1Q84 --"Q is for 'question mark.' A world that bears a question." Meanwhile, an aspiring writer named Tengo takes on a suspect ghostwriting project. He becomes so wrapped up with the work and its unusual author that, soon, his previously placid life begins to come unraveled.

As Aomame's and Tengo's narratives converge over the course of this single year, we learn of the profound and tangled connections that bind them ever closer: a beautiful, dyslexic teenage girl with a unique vision; a mysterious religious cult that instigated a shoot-out with the metropolitan police; a reclusive, wealthy dowager who runs a shelter for abused women; a hideously ugly private investigator; a mild-mannered yet ruthlessly efficient bodyguard; and a peculiarly insistent television-fee collector.

A love story, a mystery, a fantasy, a novel of self-discovery, a dystopia to rival George Orwell's-- 1Q84 is Haruki Murakami's most ambitious undertaking yet: an instant best seller in his native Japan, and a tremendous feat of imagination from one of our most revered contemporary writers.

An ode to George Orwell's "1984" told in alternating male and female voices relates the stories of Aomame, an assassin for a secret organization who discovers that she has been transported to an alternate reality, and Tengo, a mathematics lecturer and novice writer.

In 1982 Tokyo, Aomame leaves a cab to avoid gridlock and finds herself in a brave new world, while Tengo labors to polish a manuscript a teenager has submitted to a literary contest. These two stories wind around each other and eventually conjoin in Murakami's shining magnum opus, which tells us everything we need to know about the world today. (LJ 9/15/11) (c) Copyright 2011. Library Journals LLC, a wholly owned subsidiary of Media Source, Inc. No redistribution permitted.

The massive new novel from international sensation Murakami (What I Talk About When I Talk About Running) sold out in his native Japan, where it was released in three volumes, and is bound to provoke a similar reaction in America, where rabid fans are unlikely to be deterred by its near thousand-page bulk. Nor should they be; Murakami's trademark plainspoken oddness is on full display in this story of lapsed childhood friends Aomame and Tengo, now lonely adults in 1984 Tokyo, whose destinies may be curiously intertwined. Aomame is a beautiful assassin working exclusively for a wealthy dowager who targets abusive men. Meanwhile Tengo, an unpublished writer and mathematics instructor at a cram school, accepts an offer to write a novel called Air Chrysalis based on a competition entry written by an enigmatic 17-year-old named Fuka-Eri. Fuka-Eri proves to be dangerously connected to the infamous Sakigake cult, whose agents are engaged in a bloody game of cat-and-mouse with Aomame. Even stranger is that two moons have appeared over Tokyo, the dawning of a parallel time line known as 1Q84 controlled by the all-powerful Little People. The condensing of three volumes into a single tome makes for some careless repetition, and casual readers may feel that what actually occurs doesn't warrant such length. But Murakami's fans know that his focus has always been on the quiet strangeness of life, the hidden connections between perfect strangers, and the power of the non sequitur to reveal the associative strands that weave our modern world. 1Q84 goes further than any Murakami novel so far, and perhaps further than any novel before it, toward exposing the delicacy of the membranes that separate love from chance encounters, the kind from the wicked, and reality from what people living in the pent-up modern world dream about when they go to sleep under an alien moon. (Oct.) (c) Copyright PWxyz, LLC. All rights reserved.

*Starred Review* Murakami writes two kinds of novels: short, intimate, crystalline portraits of lovers, often trapped in alternate worlds or struggling between secret selves (After Dark, 2007), and much longer, broad-canvas epics (The Wind-Up Bird Chronicle, 1997) that submerge the reader in a tidal wave of story. His latest definitely falls into the latter camp, and, yet, it clings resolutely to the intimacy of the shorter works. This foray into what is unquestionably Murakami's most vividly imagined parallel world begins simply, with two seemingly ordinary events: two lonely 10-year-olds, a boy and a girl, Tengo and Aomame, hold hands in an empty classroom, and for the next 20 years, while never seeing one another, they dream of meeting but are strangely paralyzed to make it happen. Then Aomame, a 30-year-old woman in 1984 and an assassin who kills men who abuse women walks down an emergency exit from a Tokyo expressway and finds herself in another world, which she calls 1Q84, a world overseen by two moons and ruled, apparently, by the quixotic little people. Meanwhile, Tengo has rewritten a novel by an enigmatic 17-year-old girl that accurately describes the world of 1Q84. As the lives of Tengo, Aomame, and a Dostoyevskian private investigator, who works for a religious cult that worships the little people, swirl closer and closer together, Murakami draws the reader deeper and deeper into this utterly baffling universe, switching narration between the three principal characters, each of whom grasps only a small part of their two-mooned world. Gradually but inexorably, the tension builds, as we root passionately for Tengo and Aomame to find one another and hold hands again, so simple a human connection offering a kind of oasis in the midst of the unexplainable and the terrifying. When Murakami melds fantasy and realism, mystery and epic, it is no simple genre-bending exercise; rather, it is literary alchemy of the highest order. HIGH-DEMAND BACKSTORY: Murakami, whose work has been translated into 40 languages, is one of our most-honored international fiction writers. His latest will attract great interest in literary circles.--Ott, Bill Copyright 2010 Booklist

After Dark, 2008, etc.) ambitious, sprawling and thoroughly stunning new novel had a tagline, that would be it. Things are not what they seem, indeed. A cab driver tells a protagonist named Aomame--her name means "green beans"--as much, instructing her on doing something that she has never done before and would perhaps never dream of doing, even if she had known the particulars of how to do it: namely, to descend from an endless traffic jam on an elevated expressway by means of a partially hidden service staircase. Aomame is game: She's tough, with strong legs, and she doesn't mind if the assembled motorists of Tokyo catch a glimpse of what's under her skirt as she drops into the rabbit hole. Meanwhile, there's the case of Tengo, a math teacher who, like Aomame, is 30 years old in 1984; dulled even as Japan thrives in its go-go years, he would seem to have almost no ambition, glad to serve as the ghostwriter for a teenage girl's torrid novel that will soon become a bestseller--and just as soon disappear. The alternate-universe Tokyo in which Aomame reappears (her first tipoff that it's not the "real" Tokyo the fact that the cops are carrying different guns and wearing slightly different uniforms), which she comes to call 1Q84, the q for question mark, proves fertile ground for all manner of crimes, major and minor, in which she involves herself. Can she ever click her heels and get back home? Perhaps not, for, as she grimly concludes at one point in her quest, "The door to this world only opened in one direction." It's only a matter of time before Aomame's story becomes entangled in Tengo's--in this strange universe, everyone sleeps with everyone--and she becomes the object of his own hero quest; as he says, "Before the world's rules loosen up too muchand all logic is lost, I have to find Aomame." Will he? Stay tuned. Orwellian dystopia, sci-fi, the modern world (terrorism, drugs, apathy, pop novels)--all blend in this dreamlike, strange and wholly unforgettable epic.]] Copyright Kirkus Reviews, used with permission.
More book reviews at iDreamBooks.com