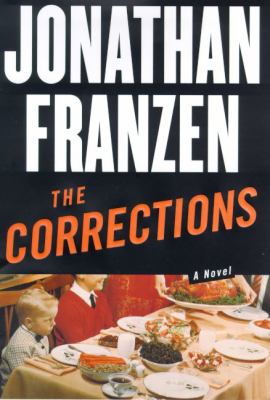 Jonathan Franzen's third novel, The Corrections , is a great work of art and a grandly entertaining overture to our new century: a bold, comic, tragic, deeply moving family drama that stretches from the Midwest at mid-century to Wall Street and Eastern Europe in the age of greed and globalism. Franzen brings an old-time America of freight trains and civic duty, of Cub Scouts and Christmas cookies and sexual inhibitions, into brilliant collision with the modern absurdities of brain science, home surveillance, hands-off parenting, do-it-yourself mental healthcare, and the anti-gravity New Economy. With The Corrections , Franzen emerges as one of our premier interpreters of American society and the American soul.

Enid Lambert is terribly, terribly anxious. Although she would never admit it to her neighbors or her three grown children, her husband, Alfred, is losing his grip on reality. Maybe it's the medication that Alfred takes for his Parkinson's disease, or maybe it's his negative attitude, but he spends his days brooding in the basement and committing shadowy, unspeakable acts. More and more often, he doesn't seem to understand a word Enid says.

Trouble is also brewing in the lives of Enid's children. Her older son, Gary, a banker in Philadelphia, has turned cruel and materialistic and is trying to force his parents out of their old house and into a tiny apartment. The middle child, Chip, has suddenly and for no good reason quit his exciting job as a professor at D------ College and moved to New York City, where he seems to be pursuing a "transgressive" lifestyle and writing some sort of screenplay. Meanwhile the baby of the family,Denise, has escaped her disastrous marriage only to pour her youth and beauty down the drain of an affair with a married man--or so Gary hints.

Enid, who loves to have fun, can still look forward to a final family Christmas and to the ten-day Nordic Pleasurelines Luxury Fall Color Cruise that she and Alfred are about to embark on. But even these few remaining joys are threatened by her husband's growing confusion and unsteadiness. As Alfred enters his final decline, the Lamberts must face the failures, secrets, and long-buried hurts that haunt them as a family if they are to make the corrections that each desperately needs.

Here's a family that will never be mistaken for the Royal Tennenbaums. Meet the Lamberts: Dad is a retired railroad man who is slipping into dementia; Mom is still trying to believe in the rosiest possible marriage and family life; and their grown children are each living out a catastrophe. The youngest son is failing miserably as a sort of screenwriter in Lithuania, the daughter is a chef of some accomplishment who can't seem to keep out of bed with just about anyone, and the oldest son is yelling at and withholding affection from his family just as his father did before him. The family home is in St. Jude (aptly named for the patron saint of hopeless causes). Enid, the wife and mother, wants the whole family together for one last Christmas before her husband, Alfred, slips beyond reach. Getting them all under the same roof even for a few hours is a massive undertaking. Franzen is a keen observer of the way the world works, and it is a tribute to his skill as a novelist that the listener remains interested in the craziness of these lives. Reader Dylan Baker brings these quirky characters to life. Recommended for fiction collections in public libraries. - Barbara Valle, El Paso P.L., TX (c) Copyright 2010. Library Journals LLC, a wholly owned subsidiary of Media Source, Inc. No redistribution permitted.

If some authors are masters of suspense, others postmodern verbal acrobats, and still others complex-character pointillists, few excel in all three arenas. In his long-awaited third novel, Franzen does. Unlike his previous works, The 27th City (1988) and Strong Motion (1992), which tackled St. Louis and Boston, respectively, this one skips from city to city (New York; St. Jude; Philadelphia; Vilnius, Lithuania) as it follows the delamination of the Lambert family Alfred, once a rigid disciplinarian, flounders against Parkinson's-induced dementia; Enid, his loyal and embittered wife, lusts for the perfect Midwestern Christmas; Denise, their daughter, launches the hippest restaurant in Philly; and Gary, their oldest son, grapples with depression, while Chip, his brother, attempts to shore his eroding self-confidence by joining forces with a self-mocking, Eastern-Bloc politician. As in his other novels, Franzen blends these personal dramas with expert technical cartwheels and savage commentary on larger social issues, such as the imbecility of laissez-faire parenting and the farcical nature of U.S.-Third World relations. The result is a book made of equal parts fury and humor, one that takes a dry-eyed look at our culture, at our pains and insecurities, while offering hope that, occasionally at least, we can reach some kind of understanding. This is, simply, a masterpiece. Agent, Susan Golomb. (Sept.)Forecast: Franzen has always been a writer's writer and his previous novels have earned critical admiration, but his sales haven't yet reached the level of, say, Don DeLillo at his hottest. Still, if the ancillary rights sales and the buzz at BEA are any indication, The Corrections should be his breakout book. Its varied subject matter will endear it to a genre-crossing section of fans (both David Foster Wallace and Michael Cunningham contributed rave blurbs) and FSG's publicity campaign will guarantee plenty of press. QPB main, BOMC alternate. Foreign rights sold in the U.K., Denmark, Holland, Italy, Norway, Portugal, Sweden and Spain. Nine-city author tour.(c) Copyright PWxyz, LLC. All rights reserved

Ferociously detailed, gratifyingly mind-expanding, and daringly complex and unhurried, New Yorker writer Franzen's third and best-yet novel aligns the spectacular dysfunctions of one Midwest family with the explosive malfunctions of society-at-large. Alfred's simple values were in perfect accord with the iron orderliness of the railroad he so zealously served, but he is now discovering the miseries and entropy of Parkinson's disease. His wife, Enid, who has filled every cupboard and closet in their seemingly perfect house with riotous clutter in an unconscious response to her hunger for deeper experience, refuses to accept the severity of Alfred's affliction. Gary, the most uptight and bossiest of their unmoored adult offspring, is so undermined by his ruthlessly strategic wife that he barely avoids a nervous breakdown. Chip loses a plum academic job after being seduced and betrayed by a student, then nearly loses his life in Lithuania after perpetuating some profoundly cynical Internet fraud. And Denise detonates her career as a trendy chef by having an affair with her boss' wife. Heir in scope and spirit to the great nineteenth-century novelists, Franzen is also kin to Stanley Elkin with his caustic humor, satiric imagination, and free-flowing empathy as he mocks the absurdity and brutality of consumer culture. At once miniaturistic and panoramic, Franzen's prodigious comedic saga renders family life on an epic scale and captures the decadence of the dot-com era. Each cleverly choreographed fiasco stands as a correction to the delusions that precipitated it, and each step back from the brink of catastrophe becomes a move toward hope, integrity, and love. Donna Seaman

The recent brouhaha about the death of realistic fiction may well be put to rest by Franzen's stunning third novel: a symphonic exploration of family dynamics and social conflict and change that leaps light-years beyond its critically praised predecessors The Twenty-Seventh City (1998) and Strong Motion (1992). The story's set in the Midwest, New York City, and Philadelphia, and focused on the tortured interrelationships of the five adult Lamberts. Patriarch Alfred, a retired railroad engineer, drifts in and out of hallucinatory lapses inflicted by Parkinson's, while stubbornly clinging to passe conservative ideals. His wife Enid, a compulsive peacemaker with just a hint of Edith Bunker in her frazzled "niceness," nervously subverts Alfred's stoicism, while lobbying for "one last Christmas" gathering of her scattered family at their home in the placid haven of St. Jude. Eldest son Gary, a Philadelphia banker, is an unhappily married "materialist"; sister Denise is a rapidly aging thirtysomething chef rebounding from a bad marriage and unresolvable relationships with male and female lovers; and younger son Chip-the most abrasively vivid figure here-is an unemployable former teacher and failed writer whose misadventures in Lithuania, where he's been impulsively hired "to produce a profit-making website" for a financially moribund nation, slyly counterpoint the spectacle back home of an American family, and culture, falling steadily apart. Franzen analyzes these five characters in astonishingly convincing depth, juxtaposing their personal crises and failures against the siren songs of such "corrections" as the useless therapy treatment (based on his own patented invention) that Alfred undergoes, the "uppers" Enid gets from a heartless Doctor Feelgood during a (wonderfully depicted) vacation cruise, and the various panaceas and hustles doled out by the consumer culture Alfred rails against ("Oh, the myths, the childish optimism of the fix"), but is increasingly powerless to oppose. A wide-angled view of contemporary America and its discontents that deserves comparison with Dos Passos's U.S.A., if not with Tolstoy. One of the most impressive American novels of recent years.
More book reviews at iDreamBooks.com