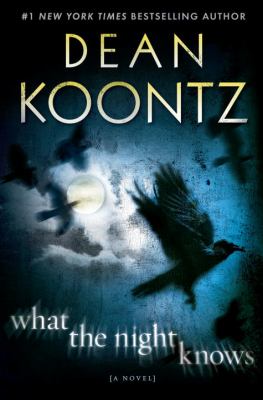 What the night knows : a novel / Dean Koontz.

In the late summer of a long ago year, a killer arrived in a small city. His name was Alton Turner Blackwood, and in the space of a few months he brutally murdered four families. His savage spree ended only when he himself was killed by the last survivor of the last family, a fourteen-year-old boy. Half a continent away and two decades later, someone is murdering families again, recreating in detail Blackwoodrsquo;s crimes. Homicide detective John Calvino is certain that his own family-his wife and three children-will be targets in the fourth crime, just as his parents and sisters were victims on that distant night when he was fourteen and killed their slayer. As a detective, John is a man of reason who deals in cold facts. But an extraordinary experience convinces him that sometimes death is not a one-way journey, that sometimes the dead return. Here is ghost story like no other you have read. In the Calvinos, Dean Koontz brings to life a family that might be your own, in a war for their survival against an adversary more malevolent than any he has yet created, with their own home the battleground. Of all his acclaimed novels, none exceedsWhat the Night Knowsin power, in chilling suspense, and in sheer mesmerizing storytelling. From the Hardcover edition.

The author's first book, Star Quest, an sf paperback, was published in 1969. Since then, Koontz has written scores of titles in a wide range of genres from children's books to graphic novels. Yet, from his always-popular body of work there sometimes emerges one of particular merit, one likely to add even more readers to his fan base. This spooky ghost story is such a book. It succeeds as an outstanding work of horror because of several elements: the appeal of the main character, homicide detective John Calvino, whose family was murdered by a serial killer when he was 14; the unstoppable evil of the killer, Alton Turner Blackwood, whose spirit returns from death to embody others so that he can force them to do his bidding; and Koontz's adherence (as outlined in his 1972 Writing Popular Fiction) to his own creed for writing suspense in which The Chase, The Race Against Time, and The Anticipation of a Violent Event are of equal importance. Verdict Essential for Koontz's myriad fans as well as followers of horror in general. [See Prepub Alert, LJ 8/10.]-Nancy McNicol, Hamden P.L., CT (c) Copyright 2010. Library Journals LLC, a wholly owned subsidiary of Media Source, Inc. No redistribution permitted.

It is a good thing that narrator Steven Weber is capable of such enthralling performance-it's this audiobook's only saving grace. A young teenage boy savagely murders his family in a manner identical to the way the family of Det. John Calvino was murdered 20 years earlier. Though John, then a boy, had killed that perpetrator himself, he knows the spirit of that evil lunatic is now possessing people, good and bad, and is out to destroy John's own wife and children. The story becomes an exercise in frustration: spooky things occur to the Calvino family, and they each stubbornly refuse to share their experiences, either in a mistaken effort to protect each other, or to protect themselves from ridicule. Weber's seasoned efforts to bring emotion and drama to this book are valiant and rewarding. His voice is rich and comfortable in the narration and can keep pace as the story becomes intense. A Bantam hardcover. (Feb.) (c) Copyright PWxyz, LLC. All rights reserved.

*Starred Review* John Calvino horns in on two fellow homicide detectives' case because it uncannily resembles the slaughter of his family two decades ago, which he, out on a surreptitious heavy date, came home to in the middle of the night, too late to do more than kill the killer. He has kept that night's details secret, so he's knocked for a loop when the present-day perp repeats verbatim one of the last things the Calvinos' murderer said. He becomes convinced that the murderer's spirit, leagued with a demon, has returned to execute a similar series of family-slaughters whose last victims will again be the Calvinos his own brood. The evil spirit will follow the same schedule as 20 years ago, using persons its demon partner helps it possess as its baleful tools. Events start bearing John out, but there's a wrinkle in the murderer's plans. Koontz worked out a family-at-risk scenario in last year's Relentless;but whereas that book was breakneck-paced, science-fictional, riddled with screwball humor, and concerned about cultural politics, this novel is deliberate, highly supernatural, somber throughout, and motivated by religious dread one of Koontz's weightiest performances. High-Demand Backstory: Koontz is Koontz; every library will need his newest.--Olson, Ray Copyright 2010 Booklist

In his latest, Koontz (Breathless, 2009, etc.)makes the case that the only thing worse than a serial killer might be his ghost.In his lifetime, Alton Turner Blackwood was no niggling serial killer. He was family size. In fact, slaughtering families was his stock in trade, and 20 years before the novel's opening, Blackwood's efforts had culminated in the decimation of the family Calvino: mother, father and two preteen daughters, one of whom he raped prior to strangling. Jack, a young son, escaped only because he was away during the carnage. He did, however, arrive home in time to find a gun and put an end to Blackwood's bloody career. Or so it was universally assumed. Flash forward to the present. John has managed to surmount, or at least sublimate, the horror of his personal tragedy and is now a very effective, much respected homicide detective. He heads his own familyNicky, the lovely woman he adores and their three smart, likable, if occasionally over-precocious, children. He's content, his house in order. And then suddenly there's the advent of Billy Lucas to unnerve him. Billy, currently an inmate in the state hospital, is a 14-year-old confessed mass murderer. A killer that young is of course always unsettling, but Billy turns out to present special problems to John Calvino in that it's his family he's done away with, all of them, including two prepubescent sisters, one of whom he first raped. Moreover, he seems to know things about John he couldn't possibly. Unless...unless what? Unless Blackwood has somehow...but that would be unthinkable.A good ghost story is all about the suspension of disbelief, which is hampered here by haphazard plotting. Still, Koontz has a pile of unswervingly loyal fans for whom the screw may turn no matter.]] Copyright Kirkus Reviews, used with permission.
More book reviews at iDreamBooks.com