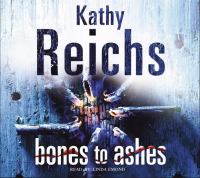 This is a gripping thriller from world-class forensic anthropologist, Kathy Reichs, bestselling author of 'Cross Bones' and 'Break No Bones'.

The "forest primeval" of Longfellow's epic poem Evangeline holds only criminal darkness in this latest offering in Reichs's Tempe Brennan series. The forensic anthropologist is back in Montreal (after Break No Bones), facing a troubling lineup of young, female corpses needing her analysis. All from Acadia, these victims trigger long-suppressed memories of Evangeline, a childhood friend also from Acadia who mysteriously disappeared one summer. Tempe and police detective Andrew Ryan (her on again-off again lover) become convinced that her friend's fate is somehow connected to the bones in her hands. Hippolyte, a police colleague who grew up in the French-speaking Atlantic provinces, opens doors to the Acadian communities, as does a forensic linguist who analyzes a small volume of poems found at one of the crime scenes. When two of the corpses become connected to a photographer with an epic-size cache of kiddie porn, the Quebec investigators recognize they've found something huge. Reichs keeps her superb suspense piece on track, leaving the reader totally wrung out by the time the ultimate villains are tracked down and confronted. Essential for all collections. [See Prepub Alert, LJ 4/1/07.]-Teresa L. Jacobsen, Solano Cty. Lib., CA (c) Copyright 2010. Library Journals LLC, a wholly owned subsidiary of Media Source, Inc. No redistribution permitted.

In bestseller Reichs's entertaining 10th Temperance Brennan forensic thriller (after Break No Bones), Brennan, her relationship with Det. Andrew Ryan on the rocks, welcomes the distraction of an unidentified New Brunswick skeleton from Quebec's cold case unit. But when the bones are determined to be that of an adolescent girl, Brennan is convinced they belong to her childhood friend, Evangeline Landry, who disappeared at age 15. Now Brennan must come to terms with Evangeline's possible death, while trying to ignore her feelings for Ryan as they investigate a series of teenage abduction murders that could be tied to the mysterious bones. With her usual blend of cutting-edge forensic science, nail-biting suspense and characters that pop off the page, Reichs, who's vice president of the American Academy of Forensic Scientists and the producer of Fox's Bones, has produced another winner in one of the genre's most satisfying series. (Aug.) (c) Copyright PWxyz, LLC. All rights reserved

"With crisp prose, well-drawn characters, unflagging attention to detail, and a resonant emotional angle, Reichs' tenth Temperance Brennan mystery (after Break No Bones, 2006) featuring the forensic anthropologist finds the forensic anthropologist in top form. This time it's personal, when the skeleton of a young girl evokes memories of a deep, decades-old friendship with10-year-old Evangeline Landry, who sustained 8-year-old Tempe at a time of great personal loss only to disappear several years later. As Tempe works to identify the skeletal remains and cause of death, Detective Andrew Ryan seeks her help with several cases involving missing girls and unidentified bodies, raising the possibility of a serial killer. With her workload overwhelming, Tempe's life starts falling apart: her visiting sister's impulsiveness puts both of them at risk; her long-estranged husband, Pete, announces unsettling plans; and Ryan the man in her life makes a difficult personal decision. Reichs deftly provides enough background to make this a successful stand-alone, at the same time advancing relationships between characters for her increasing legion of fans, who won't want to miss this one."--"Leber, Michele" Copyright 2007 Booklist

In her Montreal office, forensic anthropologist Dr. Temperance Brennan stares down at the old bones on her desk. Are they the bones of an old friend? Temperance Brennan (Monday Mourning, 2004, etc.) was eight when she met ten-year-old Évangline Landry, who for the next four years was her closest friend. Both had been lonely girls, strangers in a strange land. Tempe had been transplanted from Chicago to Charlotte, Évangline from Acadia, Canada. Abruptly, without a trace, Évangline vanished, but Tempe has never been able to forget her. Thirty years later, a female skeleton is plaguing her with painful questions. How old is old? Was the death violent? Is it absurd to think what she's thinking just because the bones were found in Acadia? Answers are hard to come by, in part because Tempe's plate is piled even higher than usual. Detective Lieutenant Andy Ryan is handling the scary new case of five girls in their late teens to early 20s, three missing, two dead. Have they fallen victim to a serial killer? And of course there's Ryan himself, a lover acting uncomfortably cool. Tempe, beset and brilliant as always, buckles down to find answers, only some of which will be rooted in the death sciences. A bit of a jumble at the end--Reichs is a committed over-plotter--but Tempe is both deeper and funnier than she's ever been, making this her best outing to date. Copyright ©Kirkus Reviews, used with permission.