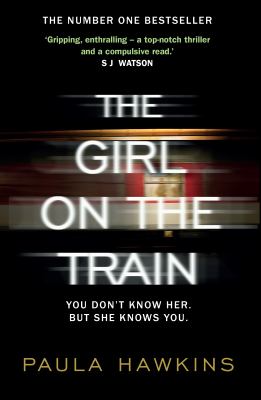 The girl on the train / Paula Hawkins.

Genre/Form: Psychological fiction.DDC classification: 823/.92 Summary: "Rachel takes the same commuter train every morning. Every day she rattles down the track, flashes past a stretch of cozy suburban homes, and stops at the signal that allows her to daily watch the same couple breakfasting on their deck. She's even started to feel like she knows them ... Their life--as she sees it--is perfect. Not unlike the life she recently lost. And then she sees something shocking. It's only a minute until the train moves on, but it's enough. Now everything's changed. Unable to keep it to herself, Rachel offers what she knows to the police, and becomes inextricably entwined in what happens next, as well as in the lives of everyone involved. Has she done more harm than good?"--Amazon.com.
List(s) this item appears in: TV and Movies | 9. Your Best Reads of 2017
Tags from this library: No tags from this library for this title. Log in to add tags.
Fiction notes: Click to open in new window

'Gripping, enthralling - a top-notch thriller and a compulsive read' S J WATSON, bestselling author of Before I Go To Sleep

Rachel catches the same commuter train every morning. She knows it will wait at the same signal each time, overlooking a row of back gardens. She's even started to feel like she knows the people who live in one of the houses. 'Jess and Jason', she calls them. Their life - as she sees it - is perfect. If only Rachel could be that happy.

And then she sees something shocking. It's only a minute until the train moves on, but it's enough.

Now everything's changed. Now Rachel has a chance to become a part of the lives she's only watched from afar.

Now they'll see; she's much more than just the girl on the train...

"Rachel takes the same commuter train every morning. Every day she rattles down the track, flashes past a stretch of cozy suburban homes, and stops at the signal that allows her to daily watch the same couple breakfasting on their deck. She's even started to feel like she knows them ... Their life--as she sees it--is perfect. Not unlike the life she recently lost. And then she sees something shocking. It's only a minute until the train moves on, but it's enough. Now everything's changed. Unable to keep it to herself, Rachel offers what she knows to the police, and becomes inextricably entwined in what happens next, as well as in the lives of everyone involved. Has she done more harm than good?"--Amazon.com.

Hawkins's highly engrossing debut novel introduces listeners to Rachel Watson, an unreliable point-of-view character if there ever was one-she is unemployed, an alcoholic, and stalking her ex-husband and his new wife. She attempts to save face by pretending to go to work every day, seeing the same seemingly perfect couple daily from her train window. Rachel's narrative is intersected by those of two other women--Megan, the woman who lives in the house Rachel is obsessed with, and Anna, who lives down the street from Megan and is married to Rachel's ex-husband. When Megan disappears, layers of the women's personalities are slowly revealed in unexpected ways. Narrators Clare Corbett, Louise Brealey, and India Fisher give outstanding performances. VERDICT A gripping novel that will appeal to fans of psychological fiction and suspense. ["With only a brief look into backstory, undeveloped characters offer no reason or motivation for their actions, and none of them is likable," disagreed the review of the Riverhead hc, LJ 10/15/14.]-Phillip Oliver, Univ. of North -Alabama, Florence © Copyright 2015. Library Journals LLC, a wholly owned subsidiary of Media Source, Inc. No redistribution permitted.

Hawkins's bestseller introduces us to a young woman named Rachel Watson, whose life has been unspooling in the years since her recent divorce. Though alcoholism and a loss of self-worth have left her jobless, she continues to commute to London by train past her old Victorian, where ex-husband Tom now lives with his new wife, Anna, and their baby girl. She also passes her neighbors Megan and Scott Hipwell, who are, in Rachel's words, "a perfect, golden couple." When she learns that Megan has gone missing, Rachel has a vague memory of having been in the neighborhood, inebriated, the night of the disappearance. The novel consists of dated entries in the diaries of Rachel, Anna, and Megan, portrayed in this production by a trio of actresses. All three readers perform admirably, and as the novel speeds toward its breathless whodunit conclusion and the diary entries grow shorter and shorter, it almost seems as if readers Corbett and Fisher, following the leads of their characters Rachel and Anna, are one-upping each other to have the story's last word. A Riverhead hardcover. (Jan.) © Copyright PWxyz, LLC. All rights reserved.

*Starred Review* Melding the voyeurism of Rear Window with the unreliable narration of Gone Girl (2012), Hawkins delivers a riveting thriller. Rachel commutes to London each day, pretending to go to a job she got sacked from months ago for being drunk. Her ex-husband left her for Megan, and now they have a baby and are living in the home Rachel so lovingly decorated. Almost every day, from the train window, she sees Anna and Scott, who live two doors down from her old home. Rachel vividly imagines Anna and Scott's perfect life (she calls them the golden couple), giving them elaborate backstories; however, one day she sees Anna kissing a man who is not her husband; the very next day, Anna goes missing. Rachel inserts herself into the investigation with a headlong desperation, keen to find a way to give her life meaning, and what she discovers is surprising on every level. The novel is alternately narrated by three equally unlikable women, and Hawkins very deliberately doles out tantalizing information, but what really gives this novel its compulsive readability is the way she so expertly mines female archetypes: the jealous ex-wife, the smug mistress, the emotionally damaged femme fatale. Hawkins makes voyeurs of her readers as she creates one humiliating scene after another with the women's near-feral emotions on full display. A wicked thriller, cleverly done. HIGH-DEMAND BACKSTORY: This may well be the next Gone Girl, with foreign rights sold in 20 countries and film rights optioned to DreamWorks.--Wilkinson, Joanne Copyright 2014 Booklist

Desperate to find lives more fulfilling than her own, a lonely London commuter imagines the story of a couple she's only glimpsed through the train window in Hawkins' chilling, assured debut, in which the line between truth and lie constantly shifts like the rocking of a train.Rachel Watsona divorced, miserable alcoholic who's still desperately in love with her ex-husband, Tomrides the same train every day into London for her dead-end job, one she unsurprisingly loses after one too many drunken outbursts. Continuing her daily commute to keep up appearances with her roommate, Rachel always pays special attention to a couple, whom she dubs "Jess and Jason," who live a seemingly idyllic life in a house near her own former home. When she sees a momentary act of infidelity, followed soon after by news that Jesswhose real name is Megan Hipwellhas disappeared, Rachel is compelled to share her secret knowledge, becoming enmeshed in the police investigation, which centers on Megan's husband, Scott. Further complicating matters is the fact that the night Megan vanished, Rachel has a hazy memory of drunkenly stumbling past the Hipwell home and seeing something she can't quite recall. Hawkins seamlessly moves among Rachel's present-day story as the investigation into Megan's disappearance widens, Megan's own life leading up to her disappearance, and snippets about Anna, the woman for whom Tom left Rachel. Even the most astute readers will be in for a shock as Hawkins slowly unspools the facts, exposing the harsh realities of love and obsession's inescapable links to violence. Copyright Kirkus Reviews, used with permission.
More book reviews at iDreamBooks.com