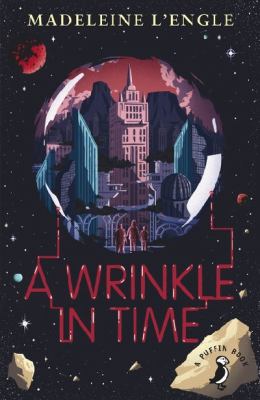 A wrinkle in time / Madeleine L'Engle ; illustrated by Keith Scaife.

DDC classification: 813.54 Awards: Winner of the Newbery Medal.Summary: When Charles Wallace Murry goes searching through a 'wrinkle in time' for his lost father, he finds himself on an evil planet where all life is enslaved by a huge pulsating brain known as 'It'. How Charles, his sister Meg and friend Calvin find and free his father makes this a very special and exciting mixture of fantasy and science fiction, which all the way through is dominated by the funny and mysterious trio of guardian angels known as Mrs Whatsit, Mrs Who and Mrs Which.
List(s) this item appears in: TV and Movies | 9. Your Best Reads of 2017
Tags from this library: No tags from this library for this title. Log in to add tags.
Fiction notes: Click to open in new window
Total holds: 0

<p>A WRINKLE IN TIME is a classic sci-fi adventure for children by bestselling US author, Madeleine L'Engle and is now major new motion picture from Disney films.<br> <br> When Charles Wallace Murry goes searching through a 'wrinkle in time' for his lost father, he finds himself on an evil planet where all life is enslaved by a huge pulsating brain known as 'It'. How Charles, his sister Meg and friend Calvin find and free his father makes this a very special and exciting mixture of fantasy and science fiction, which all the way through is dominated by the funny and mysterious trio of guardian angels known as Mrs Whatsit, Mrs Who and Mrs Which.<br> <br> Madeleine L'Engle lived in New York and wrote over 60 books for children, including A WRINKLE IN TIME, the first in her Time Quintet series and winner of the highly prestigious Newbury Medal.</p>

When Charles Wallace Murry goes searching through a 'wrinkle in time' for his lost father, he finds himself on an evil planet where all life is enslaved by a huge pulsating brain known as 'It'. How Charles, his sister Meg and friend Calvin find and free his father makes this a very special and exciting mixture of fantasy and science fiction, which all the way through is dominated by the funny and mysterious trio of guardian angels known as Mrs Whatsit, Mrs Who and Mrs Which.

Winner of the Newbery Medal.

L'Engle's Newbery Medal-winning 1962 novel of good, evil, and quantum physics gets a stellar (no pun intended) graphic novel treatment from Eisner-winner Larson (Mercury). Larson's loose, modern drawing style focuses on the characters, largely omitting backgrounds and leaving readers room to add their own imagination. Meg Murry looks every bit as gawky and uncomfortable in her own skin as she feels, and Larson also plays up Charles Wallace's specialness and strangeness, giving him large, haunted eyes that seem to see things his other family members cannot. The b&w art, highlighted with Wedgwood blue, effectively accents the children's sense of alienation, but limits some critical storytelling elements (like a villain's red eyes) after Meg, Charles Wallace, and their neighbor Calvin are whisked across time and space on a mission to rescue Dr. Murry from an evil force that threatens the universe. While fans may miss L'Engle's detailed and evocative prose, her original dialogue, combined with Larson's deft interpretation, will remind them of their first reading, while simultaneously bringing a seminal classic to a new generation. Ages 10-up. Agent: Edward Necarsulmer IV, McIntosh & Otis. (Oct.)? (c) Copyright PWxyz, LLC. All rights reserved.

Gr 5 Up-Generations of readers have treasured this science-fiction classic, so comparisons with the original are inevitable. Larson has remained true to the story, preserving the original chapter format and retaining L'Engle's voice. Black-and-white artwork is accented with blue, echoing the original cover color. Blue shading distinguishes flashbacks. Images of Meg's bruised, expressive face and slouched body shift the focus of the story slightly, making this truly her story, told from her perspective. She is initially portrayed as an "ugly duckling," and her angst and tender feelings are palpable. Larson does an excellent job of building tension. Look for the arrival of Mrs Which, the meeting with IT, and the awe-inspiring approach to Uriel. Imagery of transitions is especially effective. Mrs Whatis's metamorphosis and the dawning of morning after darkness are memorable. Striking black backgrounds with fragmented blue and white outlines perfectly capture tessering sequences. Charles Wallace's demeanor and personality variations are worth noting. Larson's crowning achievement, though, is the noticeable change in Meg's appearance after her encounter with Aunt Beast. Her face and posture portray her maturation and her willingness to not "be afraid to be afraid." However, the expansiveness of travel through time and space seems at odds with the book's trim size. Pages feel somewhat crowded, due to the numerous small panels and relatively dense text. "Playing with time and space is a dangerous game" applies to adapting a literary classic. While some may quibble with specific discrepancies from the original, this book serves as an excellent introduction and companion to a classic children's story.-Barbara M. Moon, Suffolk Cooperative Library System, Bellport, NY (c) Copyright 2012. Library Journals LLC, a wholly owned subsidiary of Media Source, Inc. No redistribution permitted.

*Starred Review* Commemorating its fiftieth anniversary, L'Engle's classic couldn't have scored a better talent to adapt its story into comics form. Larson produces high-quality coming-of-age stories featuring female protagonists, with the most recent (Mercury, 2010) even including a fantasy element to highlight the tale's emotional stakes. She dives wholeheartedly into L'Engle's seminal epic, chronicling the journey of Meg Murry, her preternaturally intelligent younger brother, Charles, and their friend Calvin O'Keefe, crossing distant worlds to save the Murry's, lost patriarch. Guided by three grandmotherly guardian angels, they navigate the dangers of a mind-controlled world fallen under the influence of a cosmic force of pure evil. Larson has miraculously preserved the power of the original's social and religious themes, as well as its compelling emotional core, while staying true to her distinctive voice and aesthetic. Her soft-lined, large-eyed characters are a modern exemplar of classical American cartooning, and the metallic blue coating of the pages evokes both the timelessness of the story and the remoteness of alien worlds. This adaptation is fabulous for presenting a fresh vision to those familiar with the original, but it's so true to the story's soul that even those who've never read it will come away with a genuine understanding of L'Engle's ideas and heart.--Karp, Jesse Copyright 2010 Booklist

In her note-perfect graphic-novel adaptation, Larson's affection for the Murry family's first adventure is clear. She skillfully pins down the sensation of traveling through space by tessering, the changing faces of Mrs. Whatsit, and the dedicated care of Aunt Beast. This version is given enough space, panel by panel, to mark every vital plot twist and character realization. (c) Copyright 2013. The Horn Book, Inc., a wholly owned subsidiary of Media Source, Inc. No redistribution permitted.

A faithfully adapted graphic novel of the beloved 1962 classic, just in time to celebrate its 50th anniversary. With a keen eye, Eisner Award winner Larson (Mercury, 2010) doesn't stray a moment from L'Engle's original text, following the Murry children, Charles Wallace and Meg, and their friend, Calvin O'Keefe, as they tesser through outer space looking for Meg and Charles Wallace's lost father. Larson's illustrations are clear and concise, neatly ordered across each page with a tidy sensibility. While it is an amazingly envisioned and sophisticatedly stylized offering, some purists may be slightly put off by the three-color black, white and blue palette. It's difficult to see The Man with Red Eyes with baby blue eyes, or to miss out on her rainbow wings when Mrs. Whatsit morphs into the centaurlike creature on Uriel. Minor grievances aside, this is a stunning reimagining of L'Engle's Newbery-winning tale, and it should entrance old and new readers alike. Adaptations can be difficult to execute with style and grace; Larson manages to do both and still add her own flair. Larson's admiration and respect for the original text shines through; this is an adaptation done right. (Graphic fantasy. 9-14)]] Copyright Kirkus Reviews, used with permission.
More book reviews at iDreamBooks.com