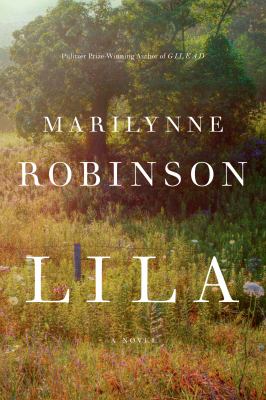 | Iowa -- FictionGenre/Form: Detective and mystery fiction. | Mystery and detective stories. | Christian fiction. | Psychological fiction.DDC classification: 813/.54 Summary: Abandoning her homeless existence to become a minister's wife, Lila reflects on her hardscrabble life on the run with a canny young drifter and her efforts to reconcile her painful past with her husband's gentle Christian worldview.
List(s) this item appears in: Christian Fiction
Tags from this library: No tags from this library for this title. Log in to add tags.
Fiction notes: Click to open in new window

National Book Award Finalist. A new American classic from the Pulitzer Prizewinning author of Gilead and Housekeeping, Marilynne Robinson, one of the greatest novelists of our time, returns to the town of Gilead in an unforgettable story of a girlhood lived on the fringes of society in fear, awe, and wonder. Lila, homeless and alone after years of roaming the countryside, steps inside a small-town Iowa church the only available shelter from the rain and ignites a romance and a debate that will reshape her life. She becomes the wife of a minister, John Ames, and begins a new existence while trying to make sense of the life that preceded her newfound security. Neglected as a toddler, Lila was rescued by Doll, a canny young drifter, and brought up by her in a hardscrabble childhood. Together they crafted a life on the run, living hand to mouth with nothing but their sisterly bond and a ragged blade to protect them. Despite bouts of petty violence and moments of desperation, their shared life was laced with moments of joy and love. When Lila arrives in Gilead, she struggles to reconcile the life of her makeshift family and their days of hardship with the gentle Christian worldview of her husband which paradoxically judges those she loves. Revisiting the beloved characters and setting of Robinsons Pulitzer Prizewinning Gilead and Home, a National Book Award finalist, Lila is a moving expression of the mysteries of existence that is destined to become an American classic.

Abandoning her homeless existence to become a minister's wife, Lila reflects on her hardscrabble life on the run with a canny young drifter and her efforts to reconcile her painful past with her husband's gentle Christian worldview.

Starred Review. Returning to the Iowa town of two earlier novels (the Pulitzer Prize-winning Gilead and Home), Robinson here continues the story of preacher John Ames, this time focusing on his much younger second wife, Lila. Battered by a life of poverty, lonely, and with no place to call home, Lila seeks shelter from the rain by entering John's church. And it is with John that she eventually, hesitatingly, finds the home she has been missing. As with the first two novels set in Gilead, this book is beautifully written. Robinson's lyrical storytelling gently draws the listener into the novel's meditations upon faith, grace, love, forgiveness, and, perhaps most of all, the connections all human beings seek. Pitch-perfect narration by Maggie Hoffman brings Robinson's words to life. VERDICT Spiritual without being preachy, forgiving of the frailties of its characters while at the same time looking at them unflinchingly, this novel is a wonder. ["While some readers may yearn for more action and structure, this is a lovely and touching story that grapples with the universal question of how God can allow his children to suffer," read the starred review of the Farrar hc, LJ 8/14.] Wendy Galgan, St. Francis Coll., Brooklyn (c) Copyright 2014. Library Journals LLC, a wholly owned subsidiary of Media Source, Inc. No redistribution permitted.

Robinson's novel, set in the fictional Iowa village of Gilead, trades in stillness and restraint. The challenge for recording an audiobook with this material is capturing its subtlety. There is no large cast of characters, all needing individual voices; there is only a tiny ensemble, anchored by the tormented drifter Lila, a young woman who seems to finally take root when she marries an elderly preacher. Hoffman, an experienced audio narrator, resists the temptation to simplify these rural characters with overdone country accents. The narration is unadorned, allowing Hoffman? to direct attention to Robinson's spare prose and the main character's private anguish as Lila sifts through her past. This is a lonely and pensive book, and the wrong narrator could have killed the introspection with showy acting. Instead the performance is fittingly understated, at times seeming lost in thought, its mood as reflective as the novel itself. A Farrar, Straus and Giroux hardcover. (Oct.) © Copyright PWxyz, LLC. All rights reserved.

*Starred Review* We catch glimpses of the Reverend John Ames' much younger second wife, Lila, in Robinson's Pulitzer Prize-winning novel, Gilead (2004), the first in a deeply reflective saga set in a small Iowa town, the second volume of which is Home (2008). We now learn Lila's astonishing story, which begins with a thunderbolt opening scene, in which an abused little girl is swept up by a strange young woman called Doll. The two roam the countryside as itinerant workers, settling down just long enough for Lila to learn to read and write. As life grows even more harrowing during the Great Depression, and Doll's dangerous secrets catch up to her, capable and strong Lila fends for herself, ultimately arriving in Gilead. The wanderer and the minister embark on a wondrously unlikely and fitful courtship as Lila asks confounding questions about existence, belief, trust, and justice. Bringing the land to ravishing life, season by season, Robinson sets the tentative lovers' profoundly involving emotional and metaphysical struggles within both the singing web of nature and the indelible stories of the Bible. Robinson has created a tour de force, an unforgettably dramatic odyssey, a passionate and learned moral and spiritual inquiry, a paean to the earth, and a witty and transcendent love story all within a refulgent and resounding novel so beautifully precise and cadenced it wholly transfixes and transforms us. HIGH-DEMAND BACKSTORY: Robinson's readers will be primed for the well-promoted third title in her cherished Iowa saga as the author tours the country.--Seaman, Donna Copyright 2014 Booklist

More balm in Gilead as Robinson (When I Was a Child I Read Books, 2012, etc.) returns to familiar ground to continue the saga of John Ames and his neighbors. Ames, Robinson's readers will know, is a minister in the hamlet of Gilead, a quiet place in a quiet corner of a quiet Midwestern state. Deceptively quiet, we should say, for Robinson, ever the Calvinist (albeit a gentle and compassionate one), is a master at plumbing the roiling depths below calm surfaces. In this installment, she turns to the title character, Ames' wife, who has figured mostly just in passing in Gilead (2004) and Home (2008). How, after all, did this young outsider wind up in a place so far away from the orbits of most people? What secrets does she bear? It turns out that Lila has quite a story to tell, one of abandonment, want, struggle and redemptionclassic Robinson territory, in other words. Robinson provides Lila with enough back story to fuel several other books, her prose richly suggestive and poetic as she evokes a bygone time before "everyonestarted getting poorer and the wind turned dirty" that merges into a more recent past that seems no less bleak, when Lila, having subsisted on cattails and pine sap, wanders into Gilead just to look at the houses and gardens: "The loneliness was bad, but it was better than anything else she could think of." She never leaves, of course, becoming part of the landscapeand, as readers will learn, essential to the gradually unfolding story of Gilead. And in Robinson's hands, that small town, with its heat and cicadas, its tree toads and morning dew, becomes as real as Faulkner's Yoknapatawpha County, just as charged with meaning if a touch less ominous, Lila's talismanic knife notwithstanding. Fans of Robinson will wish the book were longerand will surely look forward to the next. Copyright Kirkus Reviews, used with permission.
More book reviews at iDreamBooks.com