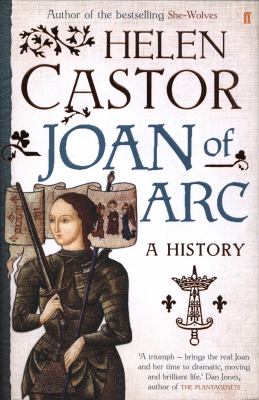 The story of one of the most remarkable women of the medieval world, as you have never read it before

A French peasant girl who heard voices from God, Joan convinced the royal court of her divine calling and became a teenage warrior, leading an army to victory against the English. Eventually captured and put on trial, she was denounced as a heretic and burned at the stake at the age of just nineteen. Five hundred years later, she was recognised as a saint.

Here, Joan and her world are brought vividly to life by acclaimed historian Helen Castor, taking us to the heart of a tumultuous and bloody moment in the fifteenth century and the short by astonishing life of an extraordinary woman.

Though many listeners may be familiar with the later life of Joan of Arc (1412-31)-leading an army to victory after hearing the voice of God, burned at the stake at age 19, and made a saint 500 years later-most of them have likely have not given any serious thought to the events of her childhood or her coming of age. In this new work, which draws on transcripts of Joan's two trials, allowing listeners to hear performances of Joan and her friends and family in their own words, Castor (history, Cambridge Univ; Blood and Roses) reminds listeners of the passion in the woman who became an icon. Anne Flosnik narrates the book with great sensitivity. Verdict This finely written book is recommended for listeners who are interested in history, biography, or Joan of Arc herself. ["Readers interested in history, rather than folklore, will find this detailed framing of Joan's story very rewarding": LJ 4/1/15 review of the Harper hc.]-Pam Kingsbury, Univ. of North Alabama, Florence © Copyright 2015. Library Journals LLC, a wholly owned subsidiary of Media Source, Inc. No redistribution permitted.

Now a legendary symbol of France, Joan of Arc began her life as a 15th-century peasant girl who, after hearing the voice of God, donned "armour as though she were a man" and inspired the army of the dauphin Charles to victory over the English before leading him to his coronation at Reims as Charles VII. Castor (She-Wolves) recreates the heady atmosphere of a period when rival French, English, and English-Burgundian claims resulted in two claimants to the French throne. Her detailed, lengthy, and well-written account relates the fighting between primary dynastic houses before Joan arrives on the scene. Joan remains enigmatic throughout much of Castor's work, but as she faces death at the hands of her English-Burgundian captors, her extraordinary will shines through. Castor increasingly uses Joan's words during her trial, and quotes from the testimony of her friends and family members in the posthumous re-examination of her cleric-orchestrated trial. Surprisingly, Castor doesn't mention post-WWI French nationalism and the desire of competing factions to appropriate Joan's story in the brief discussion of Joan's canonization in 1920. Castor creates a strong introduction to the courageous girl who swore she heard saints' voices, but also to the nation-rending struggle for power so fiercely waged that only that singular, obsessive teenager could finally save France. Illus. (May) © Copyright PWxyz, LLC. All rights reserved.

Arguing that previous accounts of the life of Joan of Arc are told backward, from the perspective of her battles and trial, Castor takes a forward approach, from the context of France before Joan of Arc became the iconic figure she was then and remains today. Fifteenth-century France was wracked with civil war and infighting that weakened it to incursions from England's King Henry V. After 15 years of bitter war and strife, the 17-year-old peasant girl Joan asserts that she has been divinely sent to drive the English from France and install the dauphin Charles as rightful king of France. Castor details the enormous contest of wills and military might between the warring parties, with the added complication of a young woman defying all social and religious conventions. Amid the political intrigue, princes, bishops, and soldiers struggled to discern whether Joan was a messenger of God or a heretic. Castor brings keenly observed historical details to the grandeur and drama of the political and religious turmoil of medieval Europe and an extraordinary young woman.--Bush, Vanessa Copyright 2015 Booklist

A fresh attempt to put young, willful Joan the Maid squarely back at the center of the French-English drama of early- to mid-15th-century France.If readers can wade through the mystifying details of the struggle for supremacy between the Burgundians (allied to the English and King Henry V) and the Armagnacs (devoted to Charles of Valois), a reward awaits when Joan finally appears midway in British author Castor's (She-Wolves: The Women Who Ruled England Before Elizabeth, 2010, etc.) historical account. Deciding which side God was on seemed to be the order of the day, and after their humiliating defeat by the English at Agincourt in 1415, the French were hard-pressed to understand why God had chosen the aggressive English invaders to punish them for some unspecified sin. Indeed, Joan was not the first female visionary to appear to advocate for the cause of France. Both Marie Robine (d. 1399) and Jeanne-Marie de Maill (1331-1414) had broadcast their visions to urge an end to schism. Joan, an illiterate shepherdess at age 16, had left her home village to set out on a mission to speak with the dauphin, housed at Chinon. Her astonishing claims to have been instructed by God to raise an army and drive the English from France so that Charles could be properly crowned required some testing of her integrity, including her virginity. Her adoption of male clothing seemed both an aid in riding and waging war and a way to thwart the sexual advances of men, which plagued her constantly up until her imprisonment. Her victories at Orleans, Jargeau, Patay and Meung, sending the English fleeing in confusion, galvanized the soldiers and townspeople, while her capture at Compigne suddenly indicated that God had forsaken her. Castor carefully combs the record of her interrogation then and rehabilitation 25 years later. An unorthodox yet erudite and elegant biography of this "massive star." Copyright Kirkus Reviews, used with permission.
More book reviews at iDreamBooks.com