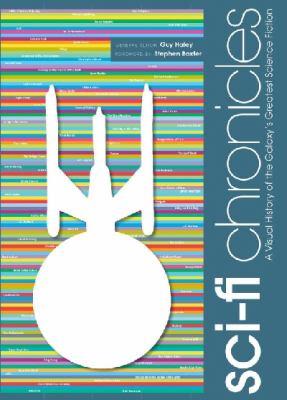 What links Stingray to Space: 1999? Which Czech writer coined the word "robot"? Who was Pierre Boulle and how did he spawn one of Hollywood's greatest franchises? All the answers and much more are in Sci-Fi Chronicles. From Barbarella to Blade Runner, from Solaris to Star Wars, and from 1984 to 2001, Sci-Fi Chronicles seeks out the greatest galactic creations. With an arresting blend of incisive text, infographic timelines, and stunning photographs, the book illustrates how world-conquering works emerged and evolved. Each chronologically-arranged entry charts the development of a much-loved sci-fi title -- from book to movie to television series, for example. Other key media -- comics, graphic novels, video games, manga -- are included where appropriate. Entries are enticingly embellished with film and television stills, book and comic covers, and other archive material. Expert text gives an entertaining overview, and color-coded timelines provide an at-a-glance guide to key publication, release, and broadcast dates. Larger franchises -- such as Doctor Who and The War of the Worlds -- feature a lavish spread of photographs, illustrating how they have evolved from black-and-white beginnings to big-budget blockbusters. And seminal sagas like Star Wars and Star Trek enjoy not only a "real world" timeline of film releases and TV broadcasts, but also a fascinating spread detailing how each work fits into the series' fictional universe. Sci-Fi Chronicles is perfect for dipping into, while its memory-jogging mentions and illustrations make it impossible to put down. It will delight long-standing sci-fi aficionados yet also entrance a younger generation, with its scope extending from vintage volumes to amazing anime.

Starred Review. Haley's (The Death of Integrity) comprehensive volume spans nearly 200 years of sf history. Its content is international in scope, featuring Chinese magazine Science Fiction World, Japanese manga Akira, and German pulp series Perry Rhodan along with diverse directors, producers, animators, and writers. Profiled are the genre's originators such as Mary Shelley, innovators including Phillip K. Dick, and modern mainstays such as producer Gale Ann Hurd. The breadth of content and eye-catching visual chronology throughout-especially relating to franchises such as Batman that have seen multiple reboots-is what sets this work apart from the rest. The detailed entry for The War of the Worlds contains information about the book by H.G. Wells and the subsequent film, comic, musical album, television series, and video game. This is all presented in a color-coded time line complete with the book cover, DVD and CD cover art, film stills, and information on box office grosses. Entries for popular franchises, such as Godzilla and Superman, also contain biographies of major characters. Creatively noted are video games that have achieved mainstream success (e.g. Doom, Halo). VERDICT Complete with an appendix of famous spaceships in popular culture, this is a must-buy for reference collections, science fiction aficionados, and infographic enthusiasts.-Stephanie Sendaula, Library Journal (c) Copyright 2015. Library Journals LLC, a wholly owned subsidiary of Media Source, Inc. No redistribution permitted.

More than 200 influential science-fiction titles encompassing books, comics, magazines, television, computer games, and film are profiled in this chronology of the genre from its origins, in 1818, with Mary Shelley's Frankenstein, to today's popular franchises like the Hunger Games and Halo. Entries range from one to six pages and feature brief narratives on the evolution of a particular title or author, a time line of publication, and a complete photo spread of titles in order of publication. As a reference source, the index provides the best access, but this book will delight science-fiction fans interested in learning more about the development of the genre, making it a great choice for the circulating collection.--Clark, Craig Copyright 2010 Booklist
More book reviews at iDreamBooks.com