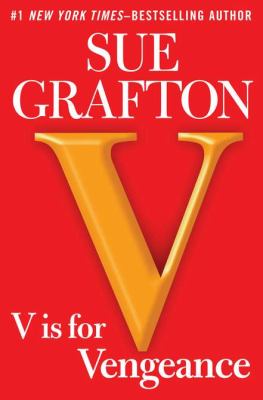 V is for vengeance / Sue Grafton.

Genre/Form: Detective and mystery fiction.DDC classification: 813/.54 Summary: California PI Kinsey Millhone investigates the death of Audrey Vance, a woman she helped arrest for shoplifting, and antagonizes just about everyone, including Audrey's fiancé, several loan sharks, a stone-cold killer, and a hapless burglar who knows more than is healthy for him.
Tags from this library: No tags from this library for this title. Log in to add tags.
Fiction notes: Click to open in new window

A spiderweb of dangerous relationships lies at the heart of this daring Kinsey Millhone mystery from #1 New York Times bestselling author Sue Grafton.

Private detective Kinsey Millhone feels a bit out of place in any department store's lingerie section, but she's entirely in her element when she puts a stop to a brazen shoplifting spree. For her trouble she nearly gets run over in the parking lot by one of the fleeing thieves--and later learns that the one who didn't get away has been found dead in an apparent suicide. But Audrey Vance's grieving fiance suspects murder and hires Kinsey to investigate a case that will reveal a big story behind a small crime and lead her into a web that connects a shadowy "private banker," an angry trophy wife, a spoiled kid with a spiraling addiction, and a brutal killer without a conscience...

California PI Kinsey Millhone investigates the death of Audrey Vance, a woman she helped arrest for shoplifting, and antagonizes just about everyone, including Audrey's fiancé, several loan sharks, a stone-cold killer, and a hapless burglar who knows more than is healthy for him.

Grafton is no slouch either, and her alphabet series has sold zillions. No reader has been named yet, and the print run numbers from Putnam are still pending, but this 22nd series volume should be as big as its predecessors. B is for buy it! (c) Copyright 2011. Library Journals LLC, a wholly owned subsidiary of Media Source, Inc. No redistribution permitted.

MWA Grand Master Grafton's finely tuned 22nd Kinsey Millhone novel (after 2009's U Is for Undertow) finds the sharp-witted California PI filled with remorse after the apparent suicide of Audrey Vance, a woman she helped arrest for shoplifting. When Audrey's perplexed fiance, Marvin Striker, hires Kinsey to further investigate her death, Kinsey's astute and relentless prying opens a Pandora's box. Was Audrey tied to major crime lords? Are these racketeers linked to corrupt cops? Kinsey's prickly personality and tart tongue antagonize just about everyone, including Marvin, several loan sharks, a stone-cold killer, and a hapless burglar who knows more than is healthy for him. For good measure, Kinsey gets punched in the face on her 38th birthday. An engrossing subplot involves an illicit love affair that neatly dovetails into the main story. This being 1988, Kinsey relies on her Rolodex, file cards, and land line, but her intuition is her chief asset. Readers will wish her well on her feisty and independent way to the end of the alphabet. Author tour. (Nov.) (c) Copyright PWxyz, LLC. All rights reserved.

*Starred Review* V may stand for vengeance, but think V for Vegas, too that's where the latest in Grafton's Kinsey Millhone series begins. It's there, in 1986, that 23-year-old Phillip Lanahan runs afoul of Santa Teresa Mob boss Lorenzo Dante and finds himself spinning off a multilevel parking structure to an unpleasant end. V is also for Vance, shoplifter Audrey Vance. To meet her, fast-forward two years. Eagle-eyed Millhone spots her lifting silk pj's in Nordstrom's and turns her in. Later, Kinsey is surprised when the woman is found dead at the bottom of a ravine, and even more suprised when the woman's fiance hires Kinsey to prove Audrey didn't commit suicide and wasn't, as Kinsey suspects, part of an organized ring of shoplifters, or pickers. Trust Kinsey to find the truth, and trust Grafton to bring together in crazy harmony a set of circumstances and an oddly assorted bunch of characters (old acquaintances and new) that, in a lesser writer's hands, would have produced narrative chaos. With only four alphabet mysteries to go, speculation on the final installment has already begun. In the meantime, Grafton's devoted fans should sit back and enjoy a terrific installment in the here and now.--Zvirin, Stephanie Copyright 2010 Booklist

U Is for Undertow, 2009, etc.) pays out all three lines with patient expertise and a sharp eye for homely details. But none of them catches fire until Kinsey runs afoul of Sgt. Det. Leonard Priddy, of the Santa Teresa Police Department, and then gets squeezed by likable ex-con Pinky Ford, who just can't stay on the straight and narrow. And when the three strands of the story finally come together, one of them doesn't seem to be pulling its weight. As always, Grafton is as original, absorbing and humane as ever. The joints just creak a bit this time.]] Copyright Kirkus Reviews, used with permission.
More book reviews at iDreamBooks.com