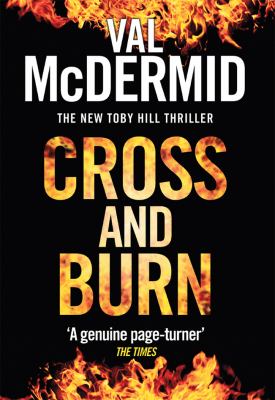 Genre/Form: Thrillers (Fiction) | Detective and mystery stories. | Large type books.DDC classification: 823.92 Summary: Someone is brutally killing women. Women who bear a striking resemblance to former DCI Carol Jordan. The connection is too strong to ignore and soon psychological profiler Tony Hill finds himself dangerously close to the investigation, just as the killer is closing in on his next target. This is a killer like no other, hell-bent on inflicting the most severe and grotesque punishment on his prey. As the case becomes ever-more complex and boundaries begin to blur, Tony and Carol must work together once more to try and save the victims, and themselves.
Tags from this library: No tags from this library for this title. Log in to add tags.
Fiction notes: Click to open in new window

Someone is brutally killing women. Women who bear a striking resemblance to former DCI Carol Jordan. The connection is too strong to ignore and soon psychological profiler Tony Hill finds himself dangerously close to the investigation, just as the killer is closing in on his next target. This is a killer like no other, hell-bent on inflicting the most severe and grotesque punishment on his prey. As the case becomes ever-more complex and boundaries begin to blur, Tony and Carol must work together once more to try and save the victims, and themselves.

McDermid's last book, The Retribution, ended with partners profiler Tony Hill and detective Carol Jordan completely estranged, Tony having failed to predict when a serial killer bent on revenge against both partners would next strike. The new novel picks up several months later, with neither Tony nor Carol currently working for the police, and Tony completely ignorant as to Carol's whereabouts. When Carol's former right-hand detective becomes entrenched in a serial murder case-where the victims, all female, bear a striking resemblance to Carol-both Carol and Tony are confronted with their pasts and a terrifying possible future. Verdict McDermid fans will undoubtedly line up to check out the eighth title in this gritty series. Devotees of the BBC series Wire in the Blood, also based on the characters, will provide a further built-in audience. Other potential readers might be dissuaded, however, by the book's detailed, sadistic acts committed against the proverbial female victim; violent acts that are emphasized via McDermid's writerly tendency to swap narrators each chapter, employing the voice of the victim in one chapter, the voice of the serial killer the next. [See Prepub Alert, 4/22/13.]-Jennifer Rogers, J. Sargeant Reynolds Community Coll. Lib., Richmond (c) Copyright 2013. Library Journals LLC, a wholly owned subsidiary of Media Source, Inc. No redistribution permitted.

McDermid's fiendishly clever eighth novel featuring forensic psychologist Tony Hill and detective Carol Jordan (after The Retribution) finds the two partners on the outs. Jordan has resigned from the Bradfield, England, police force and taken up a labor-intensive DIY job. Hill is still struggling with the events that have driven Jordan from his life. Meanwhile, Det. Sgt. Paula McIntyre, who formerly served with Jordan, catches two cases-one involving a missing person, the other a vicious murder-that together engulf her both personally and professionally. A psychopath is intent on kidnapping and training the perfect wife-and beating to death and disfiguring his "mistakes." When McIntyre's decision to seek help from Hill takes a drastic, unexpected turn, she's forced to turn to the reclusive Jordan instead. The villain may be a mere foil, but the ingenious way in which he tests the mettle of Hill and Jordan is not to be missed by fans of the unusual sleuthing duo. Agent: Jane Gregory, Gregory & Company. (Oct.) (c) Copyright PWxyz, LLC. All rights reserved.

*Starred Review* In McDermid's eighth entry to feature Detective Chief Inspector Carol Jordan and psychologist Tony Hill, the once-crackerjack crime-fighting team has gone their separate ways. DCI Jordan has hung up her badge. (She blames Hill's professional neglect for the murder of her brother and his wife; Hill, for his part, is unable to forgive himself.) But when a woman is found murdered in an abandoned London flat, the two wind up back within each other's orbit again. Hill is a suspect, though anyone who knows him knows he is incapable of such brutality. Jordan comes out of retirement to aid beleaguered DC Paula McIntyre, and the two work to exonerate Hill. (Jordan does so begrudgingly at first; she has vowed never to allow Hill back into her life). Soon, more women go missing, and a disturbing trend emerges: they all eerily resemble blonde-haired, blue-eyed Jordan. Is she next on the killer's list? Jordan may have lost her partner, but she's adopted a spirited new companion: a dog named Flash, who quickly earns the title of Woman's Best Friend. Connoisseurs of the crime novel will happily devour veteran thriller-writer McDermid's masterful blend of crisp prose, complex characters, and relentless suspense.--Block, Allison Copyright 2010 Booklist

The abrupt departure of DCI Carol Jordan leaves the Bradfield Metropolitan Police ill-equipped to deal with a killer whose targets bear a truly unsettling similarity to one another. Unwanted by the police and shocked by the failure of consulting psychological profiler Dr. Tony Hill to prevent the murders of her brother, Michael, and his lover, Lucy (The Retribution, 2012), Carol has retired to the solitude of the country to rehab Michael's barn. In her absence, someone has kidnapped, raped, tortured and murdered Bartis Health representative Nadia Wilkowa and now evidently is to follow suit with pharmacist Bev McAndrew, whose husband is stationed in the Mideast and whose son Torin, 14, has been left very much on his own. The breakup of Carol's Major Incident Team has ended Tony's consultancy with the Bradfield CID and banished Carol's friend DS Paula McIntyre to the Skenfrith Street station, where DCI Alex Fielding rules with a hand more authoritarian but altogether less inspired than Carol's. Paula reaches out first to Tony, then to Carol in an attempt to mend fences and incidentally enlist their help. And help is badly needed to answer two pressing questions: Why does the kidnapper favor women who look so much like Carol? And, given the way the forensic evidence is pointing, could the kidnapper conceivably be Tony, acting out his estrangement from Carol by attacking surrogates for her? McDermid earns her customary high marks for planting clues, mastering procedural detail and maintaining suspense as the net closes. As usual, however, the endlessly fraught relationships among the continuing characters are the real draw.]] Copyright Kirkus Reviews, used with permission.
More book reviews at iDreamBooks.com