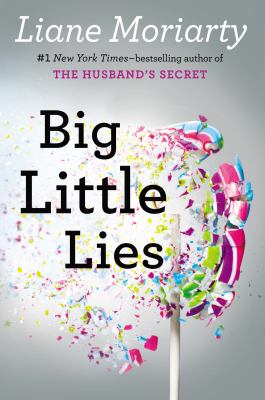 Genre/Form: Psychological fiction. | Detective and mystery fiction.DDC classification: MOR Summary: Follows three mothers, each at a crossroads, and their potential involvement in a riot at a school trivia night that leaves one parent dead in what appears to be a tragic accident, but which evidence shows might have been premeditated.
List(s) this item appears in: TV and Movies | 9. Your Best Reads of 2017
Tags from this library: No tags from this library for this title. Log in to add tags.
Fiction notes: Click to open in new window

Sometimes it's the little lies that turn out to be the most lethal. . . .
A murder . . . a tragic accident . . . or just parents behaving badly?
What's indisputable is that someone is dead.   But who did what?
Big Little Lies follows three women, each at a crossroads:   Madeline is a force to be reckoned with. She's funny and biting, passionate, she remembers everything and forgives no one. Her ex-husband and his yogi new wife have moved into her beloved beachside community, and their daughter is in the same kindergarten class as Madeline's youngest ( how is this possible?). And to top it all off, Madeline's teenage daughter seems to be choosing Madeline's ex-husband over her. (How. Is. This. Possible?).
Celeste is the kind of beautiful woman who makes the world stop and stare. While she may seem a bit flustered at times, who wouldn't be, with those rambunctious twin boys? Now that the boys are starting school, Celeste and her husband look set to become the king and queen of the school parent body. But royalty often comes at a price, and Celeste is grappling with how much more she is willing to pay.   New to town, single mom Jane is so young that another mother mistakes her for the nanny. Jane is sad beyond her years and harbors secret doubts about her son. But why? While Madeline and Celeste soon take Jane under their wing, none of them realizes how the arrival of Jane and her inscrutable little boy will affect them all.
Big Little Lies is a brilliant take on ex-husbands and second wives, mothers and daughters, schoolyard scandal, and the dangerous little lies we tell ourselves just to survive.

Follows three mothers, each at a crossroads, and their potential involvement in a riot at a school trivia night that leaves one parent dead in what appears to be a tragic accident, but which evidence shows might have been premeditated.

At kindergarten orientation, single mom Jane's son, Ziggy, is accused of hurting another child. Jane knows her son did not do it but is powerless to handle the situation. Still, as accusations escalate to bullying, the moms at the primary school begin to choose sides. Ziggy is not invited to parties, other children are told not to play with him, and then a petition circulates to have him suspended. What makes the story so riveting is that at the beginning the listener learns that someone ends up dead, but who and how isn't revealed until the very end. Narrator Caroline Lee does a great job of portraying the well-drawn characters. Although set in Australia, this could be in your own town and school. VERDICT Well done and enjoyable listening. Recommended for public libraries. ["Once again Moriarty demonstrates an excellent talent for exposing the dark, seedy side of the otherwise 'perfect' family unit while keeping the characters believable enough to be someone you might know," read the starred review of the Amy Einhorn: Putnam hc, LJ Xpress Reviews, 7/4/14.]-Michele Lauer-Bader, formerly with Half Hollow Hills Community Lib., Dix Hills, NY (c) Copyright 2014. Library Journals LLC, a wholly owned subsidiary of Media Source, Inc. No redistribution permitted.

An idyllic Australian seaside town is the setting for this frank and revealing story of domestic abuse, bullying, and infidelity centering on the lives of three wonderful women, acquainted through their young children. Reader Lee aptly portrays Madeline as the voice of reason amid schoolyard gossipers and rumormongers. Voiced as straight-talking, feisty, and loud, Madeline is struggling with her other daughter, a defiant teenager, a derelict ex-husband, and his new bohemian wife. Beautiful, distracted Celeste and her hedge fund husband have material riches, adorable twin boys, and a vile, toxic marriage. Celeste's quiet, hesitant voice conveys the weight of her "secret shame." Single mother Jane's youth and vulnerability are palpable: "All around her was rich, vibrant color; she was the only colorless thing." Controlling, alpha moms-"blond bobs"-provide comic relief to this cautionary tale of parents behaving badly. Lee's lovely Australian accent is delightfully expressive; she skillfully balances a range of voices, thoughts, temperaments, and colloquialisms ("G'day, mate") as characters wrestle with secrets, lies, power, violence, trust, and truth. A Putnam hardcover. (Aug.) © Copyright PWxyz, LLC. All rights reserved.

*Starred Review* It begins with a murder. It's not clear who was killed, but it was definitely someone at the Audrey and Elvis Trivia Night fund-raiser at Piriwee Public School on the coast of Australia. Back up six months, to when Madeline Mackenzie celebrated her fortieth birthday with kindergarten orientation for her youngest daughter, Chloe. She runs into the gorgeous, if spacey, Celeste White and her twin boys; new kid Ziggy Chapman and his mom, shy, jumpy, Jane; and, unfortunately, her ex-husband and his New Age wife, Bonnie, and their daughter, Skye. When a little girl accuses Ziggy of choking her, the class moms begin to divide. As antibullying fervor escalates, Jane grows closer to Madeline, with whom she shares her terrible secret, and Celeste, who is hiding an insidious secret of her own, not that she will admit it. What starts as a send-up of suburban helicopter parenting turns darker as the pages flip by, building to a tense climax at Trivia Night, where one too many fizzy pink cocktails leads to . . . well, murder. Funny and thrilling, page-turning but with emotional depth, Big Little Lies is a terrific follow-up to The Husband's Secret (2013).--Maguire, Susan Copyright 2014 Booklist

After last years best-sellingThe HusbandsSecret, Australian Moriarty brings the edginess of her less-knownThe Hypnotists Love Story(2012) to bear in this darkly comic mystery surrounding a disastrous parents' night at an elementary school fundraiser.Thanks to strong cocktails and a lack of appetizers, Pirriwee Publics Trivia Night turns ugly when sloshed parents in Audrey Hepburn and Elvis costumes start fights at the main entrance. To make matters worse, out on the balcony where a smaller group of parents have gathered, someone falls over the railing and dies. Was it an accident or murder? Who is the victim? And who, if anyone, is the murderer? Backtrack six months as the cast of potential victims and perps meet at kindergarten orientation and begin alliances and rivalries within the framework of domestic comedy-drama. Theres Chloes opinionated, strong-willed mom, Madeline, a charmingly imperfect Everywoman. Happily married to second husband Ed, Madeline is deeply hurt that her older daughter wants to move in with her ex-husband and his much younger, New-Agey second wife; even worse, the couples waifish daughter, Skye, will be in Chloes kindergarten class. Madelines best friend is Celeste, mother of twins Max and Josh. Its hard for Madeline and the other moms not to envy Celeste. She's slim, rich and beautiful, and her marriage to hedge fund manager Perry seems too perfect to be true; it is. Celeste and Madeline befriend young single mother Jane, who has moved to the coast town with her son, Ziggy, the product of a one-night stand gone horribly wrong. After sweet-natured Ziggy is accused of bullying, the parents divide into defenders and accusers. Tensions mount among the mothers' cliques and within individual marriages until they boil over on the balcony. Despite a Greek chorus of parents and faculty sharing frequently contradictory impressions, the truth remains tantalizingly difficult to sort out.Deservedly popular Moriarty invigorates the tired social-issue formula of womens fiction through wit, good humor, sharp insight into human nature and addictive storytelling. Copyright Kirkus Reviews, used with permission.
More book reviews at iDreamBooks.com