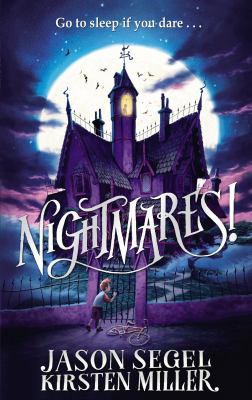 Charlie Laird has always been fascinated by the sinister purple mansion that overlooks Cyprus Creek. Now heâe(tm)s moving in there with his dad, little brother and new stepmother, who may or may not be a witch.

Itâe(tm)s not long before the mansion starts to have a strange effect on Charlie. His dreams turn to nightmares and they feel uncomfortably real. Most frightening of all, the nightmares have started to slip out of his dreams and into the waking world.

They are threatening to take over and only Charlie and his friends can stop them. Can they find the courage to face their deepest, darkest fears? Will they conquer the creatures of the night and save the day?

A terrifying witch haunts every second of eleven-year-old Charlie Lairds' sleep, and now the dread that fills his dreams is creeping into the waking world.

Coraline meets Monsters, Inc. in this delightfully entertaining offering from actor Segel and co-author Miller (How to Lead a Life of Crime), first in a trilogy. Twelve-year-old Charlie Laird believes his new stepmother is a witch, in part due to his horrible nightmares about being held captive by witches. Charlie soon learns that the witches' Netherworld is real, and his fear has opened a portal allowing creatures to travel between realms. When Charlie ventures into the Netherworld to rescue his kidnapped younger brother, he becomes embroiled in an epic struggle to prevent the terrifying President Fear from turning the mortal world into a place of eternal nightmares. In a story that's both whimsical and disturbing, Charlie works to rescue his friends, help them overcome their fears, and find his courage. Segel and Miller make for a solid team; their Netherworld is populated by everything from talking bugs to killer clowns, and the underlying message-sometimes you have to admit to and confront your fears-is important. Kwasny's illustrations provide a fitting mixture of realism and absurdity. Ages 8-12. Agent: Erin Malone, William Morris Endeavor and Abrams Entertainment. (Sept.) (c) Copyright PWxyz, LLC. All rights reserved.

Gr 4-6-Eleven-year-old Charlie Laird is absolutely convinced that his stepmother Charlotte is a witch. She dresses funny, serves seriously strange food (kale pancakes), and runs a store called Hazel's Herbarium. Charlie's dad, little brother, and friends all like Charlotte and think Charlie's still grieving for his mom. He's also suffering from terrible nightmares, and living in Charlotte's crazy purple mansion isn't helping. The evil witch who stars in those nightmares threatens to follow the protagonist into the real world and kidnap his brother. Instead, he is tricked into the Nightmare World, peopled with monsters and madness: gorgons, goblins, crazy clowns, scary bunnies, tests filled with gibberish, and the monomaniacal President Fear (who also inhabits the real world as the truly terrifying Principal Stearns). But all is not what it seems, and some of the scariest creatures turn out to be sympathetic-or even allies. There are lessons to be learned about facing fears and uncovering the real enemy in this tale. Pals Alfie, Rocco, and Paige are interesting and fairly three-dimensional; most of the adults (with the exceptions of Fear/Stearns and Charlotte) are merely background. The fear is as much psychological as anything, and there's humor and a fairly high ick-factor, but relatively little violence. A good choice for elementary-aged scare-seekers.- Mara Alpert, Los Angeles Public Library (c) Copyright 2014. Library Journals LLC, a wholly owned subsidiary of Media Source, Inc. No redistribution permitted.

When Charlie Laird's mom died, he was, of course, devastated, and he's devastated all over again when his dad marries Charlotte, the kooky herbalist with unruly red hair. After they all move to Charlotte's family home a spooky, purple mansion Charlie begins having terrible nightmares starring a cauldron-stirring, red-haired witch, and he starts believing that his stepmom is not who she seems. While investigating her workroom in the tower of the house, he stumbles through a portal into the Netherworld, a creepy, fractured version of his own town that's populated with elements from kids' nightmares, including bunnies with toothy jaws for faces and a fedora-wearing gorgon. There he discovers who's really behind his bad dreams as well as some secrets about not only Charlotte but also his own mother. Segel (of The Muppets movie) and Miller build an entertaining, cartoony world full of scary (but not too scary) monsters, silly jokes, plucky kid heroes, and a cinematic plot that trundles onward to a satisfying conclusion, with a promise of adventures to come. Final illustrations not seen.--Hunter, Sarah Copyright 2014 Booklist

Charlie Laird's nightmares become a reality when he discovers a portal to the Netherworld.Charlie's widowed father has recently remarried, and Charlie hates it. He hates his stepmom. He hates that his young brother, Jack, is taken in by her. But most of all he hates the new house his family has moved into, as well as the never-ending stream of nightmares he experiences there every night. An evil witch haunts Charlie's sleep, threatening to eat him and his brother up. When the witch appears in the real world and snatches Jack away, Charlie follows her into the Netherworld and, with the aid of a gorgon and a few slumbering friends, sets out to save not just his brother, but the Land of Nightmares itself. As a first book in a proposed trilogy, there's a lot of promise here. The authors set up the supernatural rules of this world with ease, not getting bogged down with exceptions or contradictions. The book succeeds at scaring and amusing in equal measure, with the Nightmares as varied as they are humorous. At the heart of the endeavor is a story of personal growth, one that fits nicely with the spooky doings surrounding it. Best of all, this is a contained story. There's no cliffhanger, no shoddy lingering threats. Upon completion, readers could set it down and never return to the Netherworld, but this world is so enjoyable and interesting, it's hard to not anticipate future trips.Sweet, charming and imaginative: a promising launch. (Fantasy. 8-12) Copyright Kirkus Reviews, used with permission.
More book reviews at iDreamBooks.com