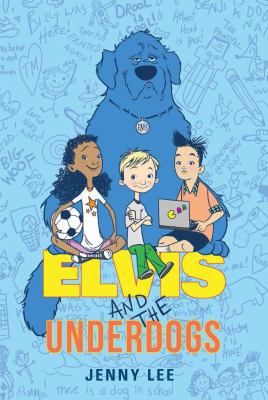 Elvis and the underdogs / Jenny Lee ; illustrations by Kelly Light.

DDC classification: [Fic] Summary: All his life Benji, now ten, has been sickly and he has long been targeted by the school bully, but after a seizure Benji gets a therapy dog that is big enough to protect him and can also talk.
Tags from this library: No tags from this library for this title. Log in to add tags.
Fiction notes: Click to open in new window
No physical items for this record

From Jenny Lee, writer on the Disney Channel show Shake It Up!, the number-one-rated kids' show in the country, this feel-good middle-grade novel is about a sickly boy whose life is turned upside down when he gets a therapy dog . . . who can talk!

Benji Wendell Barnsworth is a small ten-year-old boy with a big personality. Born premature, Benji is sickly, accident-prone, and at the hospital so often he even has his own punch card. So when Benji wakes up one day from a particularly bad spell, his doctors take the radical step of suggesting he get a therapy dog. But when a massive crate arrives at Benji's house, out walks a two-hundred-pound Newfoundland who can talk! And boy, is he bossy.

In this hilarious and heartwarming friendship story in the tradition of bestselling authors Gordon Korman and Carl Hiaasen, Elvis brings out the dog lover in the most surprising people and shows Benji that making new friends may not be as scary as he once thought.

All his life Benji, now ten, has been sickly and he has long been targeted by the school bully, but after a seizure Benji gets a therapy dog that is big enough to protect him and can also talk.

Ten-year-old Benji Wendell Barns-worth is constantly in and out of the hospital with a smattering of illnesses and allergies; he faints often, and he recently had an epileptic seizure. Getting a therapy dog-a gigantic, talking, Doritos-eating Newfoundland named Parker Elvis Pembroke IV-spares Benji the humiliation of wearing a safety helmet at all times. Elvis, as Benji dubs him, is confident and very well-spoken, and his influence helps Benji assert himself around his well-meaning but suffocating mother, as well as seek adventure with his new friends: Taisy, the pressured daughter of a celebrity athlete, and Alexander, a new student with a "total recall brain." This children's book debut from Lee, a writer and producer on Disney's Shake It Up sitcom (and clearly a dog lover), is suffused with optimism, despite Benji's many health problems. Benji comes across as down-to-earth and sympathetic-without being pitiable-and the underlying theme about strength found in companionship gives the story just enough gravity. Light contributes b&w digital spot cartoons, not all seen by PW. Ages 8-12. Author's agent: Sally Woffard-Girand, Union Literary. Illustrator's agent: Elizabeth Harding, Curtis Brown. (May) (c) Copyright PWxyz, LLC. All rights reserved.

Gr 4-6-Ten-year-old Benji has always felt like a misfit. He is small and has health concerns that include fainting in stressful situations. He has also become the favorite target of the class bully. When he suffers a seizure at school and ends up in the hospital, his only alternative to wearing a protective helmet is to get a therapy dog, to which his mother reluctantly agrees. However, Parker Elvis Pembroke IV, a Newfoundland, is not just a therapy dog; he is a talking dog whom only Benji can hear. With his arrival, Benji's life starts to change dramatically for the better. This lighthearted, enjoyable read features a variety of young people dealing with issues such as a pushy father and an overprotective mother. With the help of a wise and self-possessed pup, three "underdogs" become friends as they share some adventures, and the story has enough twists along the way to keep children interested.-Carol Schene, formerly at Taunton Public Schools, MA (c) Copyright 2013. Library Journals LLC, a wholly owned subsidiary of Media Source, Inc. No redistribution permitted.

*Starred Review* This funny, unabashedly feel-good boy-and-dog story, features an unusually intelligent 200-pound Newfoundland and a manic, undersized 10-year-old with a preemie legacy of illnesses, allergies, accidents, and fainting spells. In the wake of an event diagnosed as an idiopathic epileptic seizure, Benji stages a frantic campaign to get a therapy dog rather than wear the world's dorkiest safety helmet. His crusade bears unexpectedly humongous fruit. From an outsize shipping crate comes Parker Elvis Pembroke IV, who stuffily announces to Benji (everyone else hears only growls and barks) that he's earmarked to be the president's dog. However, he supposes he'll stick around until the mistake is rectified. He's telling the truth, but by the time the Secret Service shows up, at the book's conclusion, Elvis and Benji have argued, conspired, joked, and bonded through a helter-skelter series of incidents ranging from a truly memorable classroom show-and-tell to a scary brush with anaphylactic shock. Author Lee (writer-producer at the Disney Channel's Shake It Up) surrounds her well-articulated main characters with a colorful supporting cast. They include Benji's clingy mother, who is caricatured; a bully, who is not; and a mini dog that has Elvis slathering bystanders with drool. This crowd-pleasing debut is definitely ready for prime time.--Peters, John Copyright 2010 Booklist

Who says dogs aren't allowed in school? After sickly ten-year-old Benji has a seizure, he gets a new therapy dog who can go everywhere with him. Not only is the dog way better than the dorky helmet his mom had him wearing, the dog can also talk. Elvis the dog brings Benji together with an unlikely trio of friends in this spirited novel. (c) Copyright 2013. The Horn Book, Inc., a wholly owned subsidiary of Media Source, Inc. No redistribution permitted.

Lee's debut novel, a quirky if formulaic take on bullying and friendship, falls short in its description of the partnership between Benji, the narrator, and Elvis, his talking service dog. Benji Barnsworth suffers from a host of ailments and faints under stress--which happens often, since he's Billy Thompson's favorite bullying target. When Benji has a seizure, he trades his new helmet for a service dog: a huge Newfoundland with a smart mouth. Elvis isn't exactly man's best friend, but his presence allows Benji to befriend Taisy, an overwhelmed athlete with an exfootball pro father, and Alexander, a "human GPS" with a photographic memory. Benji's witty, slightly cynical voice and close family support are the most believable aspects of an otherwise implausible book. His friends are caring but stereotypical; Asian-American Alexander's intellect borders on caricature, and Taisy's relationship with her father follows sitcom formula. The service-dog aspect reads like an afterthought. Even Benji's doctor uses "service dog" and "therapy dog" interchangeably despite their different functions, and Benji is unable to say what training Elvis received, which seems remarkably incurious, given their relationship. Elvis' job is so unclear that he could just as easily be an ordinary dog dispensing tough love. Ultimately, the thin plot is far-fetched, even for a story about a talking dog, and readers aware of the true role of service animals will be annoyed by the inaccurate portrayal. (Fiction. 8-12)]] Copyright Kirkus Reviews, used with permission.
More book reviews at iDreamBooks.com