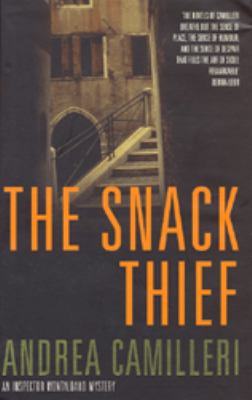 Translated from the Italian.

Unlike American movies, in which the detective can identify a suspect from a license plate number in less than two minutes, solving a crime in Italy is a bit more complicated: "One time they'd made Montalbano wait twenty-eight days, in the course of which the owner of the vehicle...was goat-tied and burnt to a crisp." And if things are done differently on the Italian mainland, they are even more bizarre on the island of Sicily. Where else could a police officer enjoy a mouthwatering meal prepared by a petty crook-turned-chef, "directly inspired by the Madonna." Camilleri's third Inspector Montalbano mystery (after The Shape of Water and The Terra-Cotta Dog) takes readers into this strange, colorful world as the sardonic yet compassionate Montalbano investigates the stabbing death of an elderly man in an elevator and the machine-gunning of a Tunisian crewman on an Italian fishing boat. Is there a connection between the two killings? And what about the case of the little boy who has been mugging other schoolchildren for their snacks? Full of memorable characters and witty takes on Italian life (`the Italian bureaucracy, usually slow as a snail, becomes lightening-quick when it comes to screwing the citizen"), Camilleri's latest proves why he is such a big hit in Europe. U.S. mystery readers take note. Highly recommended.-Wilda Williams, "Library Journal" (c) Copyright 2010. Library Journals LLC, a wholly owned subsidiary of Media Source, Inc. No redistribution permitted.

In his third Inspector Salvo Montalbano mystery to be made available in the U.S., Camilleri (The Shape of Water) displays all the storytelling skills that have made him an international bestseller. When gunfire from a Tunisian patrol boat kills a worker on an Italian fishing trawler, the worldly Sicilian police inspector knows that this is just the type of situation his overly ambitious second-in-command, Mimi Augello, will want to exploit. Meanwhile, Montalbano has to look into the stabbing death of a retiree in the elevator of the victim's apartment building. While the trawler incident appears to resolve itself, the elevator slaying gets more complex by the minute. Soon Montalbano is searching for the retiree's beautiful housekeeper (and sometimes prostitute) and her son. It's only when he finds the boy (the snack thief of the title) that Montalbano learns the true nature of the case, its relation to the trawler shooting and the danger it poses. Although warned to keep his distance, Montalbano, who can't deny his investigative instincts any more than he can refuse a hardy portion of sardines a beccafico, proceeds headlong into the thick of government corruption with a risky plan to set things right. Montalbano, despite his curmudgeonly exterior, has a depth to him that charms. Readers are sure to savor this engrossing, Mafia-free Sicilian mystery. (Apr. 28) (c) Copyright PWxyz, LLC. All rights reserved

In the third Inspector Montalbano mystery to appear in the U.S., the maverick Sicilian cop is once again convinced that the fix is in and determined to unfix it. This time Montalbano suspects a link between the stabbing of a businessman in an apartment-house elevator and the shooting of a crewman on a fishing boat. Connecting the two are an enterprising Tunisian prostitute, now vanished, and her young son, who has been surviving by stealing lunches from schoolchildren. Montalbano fits the pieces together gradually, taking time, as always, for plenty of leisurely lunches but eventually exposing a wide-ranging plot fuelled by high-level corruption. What makes this series so good is Camilleri's unsurpassed ability to mix hard-boiled terror with the comic frustrations of daily life. Montalbano is the southern Italian equivalent of Magdalen Nabb's Marshal Guarnaccia, also a Sicilian but stationed in Florence. Both men covet the quiet pleasures of food, drink, and female companionship, but neither is quite able to resist the compulsion to help others. In the tension between those two forces, the Italian crime novel thrives. --Bill Ott

Bristly Sicilian police inspector Salvo Montalbano is roused from a sweet dream of his mistress Livia by a blaring telephone and the nervous voice of detective Catarella announcing a murder. The body of semi-retired businessman Palmisano Lapecora, uncharacteristically dressed to the nines, was found aboard the elevator of his apartment building by Giuseppe, a cocky security guard. Antonietta, the widow, peppers Montalbano with unusual questions. Most of the Lapecoras' quirky neighbors don't want to get involved, but they do let it be known that Lapecora was enjoying an ongoing affair with Karima, a beautiful young Tunisian whose skills include housecleaning and probably prostitution. As usual (The Terra-Cotta Dog, 2002, etc.), Montalbano's path to a solution is complicated by amusingly incompetent coworkers and pesky distractions. Off the coast of Sicily, a crewman on an Italian fishing trawler is gunned down by a Tunisian patrol boat. Could the cases be related? Montalbano's suspicion that Karima holds the key to his own mystery is confirmed when she disappears shortly after talking to him, leaving behind her sensitive young son, Francois. Even stranger, Livia unexpectedly volunteers to take care of Francois, and still more unexpectedly, displays a strong maternal instinct, something Montalbano has never seen in her before. And when her boorish male protÉgÉ Mimi offers to help Livia, Montalbano's jealousy surprises himself. Along with his midlife crisis, these developments lead him to some genuine soul-searching. After rambling a bit early on, the tale is enlivened and deepened by eleventh-hour surprises. Montalbano, blessedly, is as bitingly humorous as ever. Copyright ©Kirkus Reviews, used with permission.
More book reviews at iDreamBooks.com