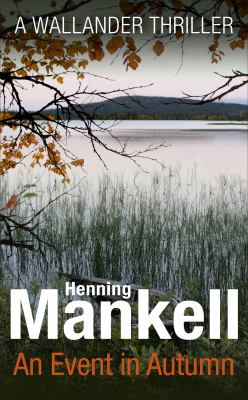 An event in autumn / Henning Mankell ; translated from the Swedish by Laurie Thompson.

Kurt Wallanderâe(tm)s life looks like it has taken a turn for the better when his offer on a new house is accepted, only for him to uncover something unexpected in the garden âe" the skeleton of a middle-aged woman.

As police officers comb the property, Wallander attempts to get his new life back on course by finding the womanâe(tm)s killer with the aid of his daughter, Linda. But when another discovery is made in the garden, Wallander is forced to delve further back into the area's past.

A treat for fans and new readers alike, this is a never before published Kurt Wallander novella

Translated from the Swedish. -Kurt Wallander's life looks like it has taken a turn for the better when his offer on a new house is accepted, only for him to uncover something unexpected in the garden - the skeleton of a middle-aged woman. As police officers comb the property, Wallander attempts to get his new life back on course by finding the woman's killer with the aid of his daughter, Linda. But when another discovery is made in the garden, Wallander is forced to delve further back into the area's past.

Some cases aren't as cold as you'd think Kurt Wallander's life looks like it has taken a turn for the better when his offer on a new house is accepted, only for him to uncover something unexpected in the garden - the skeleton of a middle-aged woman. As police officers comb the property, Wallander attempts to get his new life back on course by finding the woman's killer with the aid of his daughter, Linda. But when another discovery is made in the garden, Wallander is forced to delve further back into the area's past.

Set in 2002, this compelling short novel chronicles an episode in the life of Kurt Wallander shortly before the Swedish detective ended his career in 2011's The Troubled Man. Wallander, who shares his Ystad flat with daughter Linda, decides to look take a look at a house in the country owned by a colleague's relative. He discovers an abandoned farmhouse and, shockingly, "the remains of a human hand, sticking up out of the brown clay soil." The crime scene professionals who take over eventually discover two bodies, their identities completely unknown but foul play suspected. The search for what happened to the victims baffles and consumes Wallander, who observes, "The past has closed all doors behind it." The search for their names and fates propels the book, which has much to say about aging, history, and justice. Mankell's insightful afterword about the genesis of his hero and his initial decision to write crime fiction (to combat racism in Sweden) is a plus. (Aug.) © Copyright PWxyz, LLC. All rights reserved.

We thought we'd seen the last of Mankell's quintessential Scandinavian police detective Kurt Wallander in The Troubled Man (2011), but crime fiction readers know never to say never when it comes to popular series leads. This curiosity is a bit like one of those handmade chocolates fancy restaurants serve as an extra when the bill comes. It's a novella, really, less than 200 pages, and it was originally written for a Dutch book promotion in which purchasers of a crime novel would receive an extra story as a bonus. Later, the story was adapted as an episode in the PBS Wallander series. Chronologically, the tale fits into the Wallander series just prior to The Troubled Man. Wallander is aging, aware that his days as a copper are numbered, and he's looking for a house in the country, a landscape distant in every way from the 24/7 routine of police work. On the recommendation of a colleague, he thinks he's found the perfect spot, but something seems amiss in the backyard. Crime has a way of reaching out and grabbing the melancholy Wallander, as he discovers yet again when, after a bit of foraging, he finds a hand well, the skeleton of a hand sticking out through the soft earth in the yard. You're not through yet, the hand seems to say, and further investigating uncovers two more skeletons, at least 50 years old, buried nearby. Naturally, the house loses its allure as a retirement getaway, but as a crime scene, it draws the reluctant Wallander back into the game. What follows is a stripped-down version of a standard Wallander novel. As in The Troubled Man, there is much rummaging in the distant past as the detective attempts to first identify and then trace the provenance of the victims. That rummaging prompts the usual melancholy reflection, too, but for readers of the series, it all seems to be done in shorthand, without the layering of both investigation detail and human emotion that gives the books their remarkable depth. Still, for those who have followed the long, slow decline of Wallander's life, this unexpected extra chapter possesses considerable power, with the intimations of mortality carrying more weight given what we know will happen in the series finale. Appended to the story is an afterword in which Mankell reflects on the Wallander series, how it began and how he chose to end it. I never think about Kurt Wallander, the detective's creator declares. I don't miss him. Many of us feel rather differently.--Ott, Bill Copyright 2014 Booklist

Great news for fans who feared they'd see no more of Kurt Wallander: a characteristically melancholy novella whose events take place in 2002, just before those of Wallander's last appearance (The Troubled Man, 2011). The most beloved curmudgeon of the Ystad police is feeling his age, his temperament and his mortality. Would a change of scene help? His colleague Martinson offers him first crack at a country home he's selling for his wife's cousin, now grown old and senile. Although Wallander's skeptical about the place, it turns out to be absolutely perfect except for the skeletal hand he finds sticking up from the yard just as he's about to leave. His find is at least 50 years old, but it gives him pause. And the discovery of two equally old skeletons on the grounds effectively kills his appetite for buying the house. But now at least his life has been given new purpose: to figure out who killed these two victims, both dead by violence, and why no one in town ever reported them missing. A promising lead that turns out to be a red herring ends up providing a clue that leads to the murderer, whom Wallander confronts in a highly implausible but utterly satisfying sequence. Miraculously, nothing about the story's small scale prevents Wallander from casting a shadow as long as ever, and many readers will be less concerned with how he winds up the mystery than with whether he ends up purchasing that house after all. As a bonus, Mankell (A Treacherous Paradise, 2013, etc.) appends a reminiscence of Wallander's creation and a brief account of this tale's composition that includes its saddest sentence: "There are no more stories about Kurt Wallander." Copyright Kirkus Reviews, used with permission.
More book reviews at iDreamBooks.com