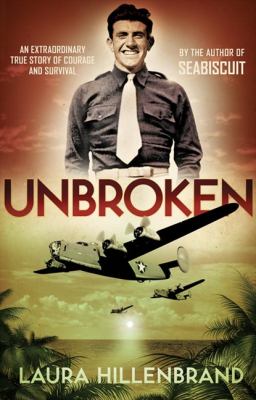 The new book from the author of the bestselling and much-loved Seabiscuit.

Hillenbrand (www.laurahillenbrandbooks.com), author of Seabiscuit (2003)-also available from Books on Tape/Random Audio-presents another extensively researched and compellingly written tale of steadfastness. At the centerpiece of this historical biography set during World War II is Louis Zamperini, a one-time U.S. Olympics distance runner-turned-Army Air Force bombardier whose plane goes down over the Pacific. Emmy Award-winning actor Edward Herrmann, who frequently does voice-over work for the History Channel, uses his rich voice to infuse Hillenbrand's tale with a palpable dramatic flavor, casting Zamperini as a symbol of the American ethos. Recommended for those interested in World War II and American history and for anyone liking Seabiscuit. [The LJ and New York Times best-selling Random hc was recommended "for general readers who like a good story and for World War II history buffs," LJ 10/1/10.-Ed.]-Christopher Rager, Pasadena, CA (c) Copyright 2011. Library Journals LLC, a wholly owned subsidiary of Media Source, Inc. No redistribution permitted.

From the 1936 Olympics to WWII Japan's most brutal POW camps, Hillenbrand's heart-wrenching new book is thousands of miles and a world away from the racing circuit of her bestselling Seabiscuit. But it's just as much a page-turner, and its hero, Louie Zamperini, is just as loveable: a disciplined champion racer who ran in the Berlin Olympics, he's a wit, a prankster, and a reformed juvenile delinquent who put his thieving skills to good use in the POW camps, In other words, Louie is a total charmer, a lover of life-whose will to live is cruelly tested when he becomes an Army Air Corps bombardier in 1941. The young Italian-American from Torrance, Calif., was expected to be the first to run a four-minute mile. After an astonishing but losing race at the 1936 Olympics, Louie was hoping for gold in the 1940 games. But war ended those dreams forever. In May 1943 his B-24 crashed into the Pacific. After a record-breaking 47 days adrift on a shark-encircled life raft with his pal and pilot, Russell Allen "Phil" Phillips, they were captured by the Japanese. In the "theater of cruelty" that was the Japanese POW camp network, Louie landed in the cruelest theaters of all: Omori and Naoetsu, under the control of Corp. Mutsuhiro Watanabe, a pathologically brutal sadist (called the Bird by camp inmates) who never killed his victims outright-his pleasure came from their slow, unending torment. After one beating, as Watanabe left Louie's cell, Louie saw on his face a "soft languor.... It was an expression of sexual rapture." And Louie, with his defiant and unbreakable spirit, was Watanabe's victim of choice. By war's end, Louie was near death. When Naoetsu was liberated in mid-August 1945, a depleted Louie's only thought was "I'm free! I'm free! I'm free!" But as Hillenbrand shows, Louie was not yet free. Even as, returning stateside, he impulsively married the beautiful Cynthia Applewhite and tried to build a life, Louie remained in the Bird's clutches, haunted in his dreams, drinking to forget, and obsessed with vengeance. In one of several sections where Hillenbrand steps back for a larger view, she writes movingly of the thousands of postwar Pacific PTSD sufferers. With no help for their as yet unrecognized illness, Hillenbrand says, "there was no one right way to peace; each man had to find his own path...." The book's final section is the story of how, with Cynthia's help, Louie found his path. It is impossible to condense the rich, granular detail of Hillenbrand's narrative of the atrocities committed (one man was exhibited naked in a Tokyo zoo for the Japanese to "gawk at his filthy, sore-encrusted body") against American POWs in Japan, and the courage of Louie and his fellow POWs, who made attempts on Watanabe's life, committed sabotage, and risked their own lives to save others. Hillenbrand's triumph is that in telling Louie's story (he's now in his 90s), she tells the stories of thousands whose suffering has been mostly forgotten. She restores to our collective memory this tale of heroism, cruelty, life, death, joy, suffering, remorselessness, and redemption. (Nov.) -Reviewed by Sarah F. Gold (c) Copyright PWxyz, LLC. All rights reserved.

A second book by the author of Seabiscuit (2001) would get noticed, even if it weren't the enthralling and often grim story of Louie Zamperini. An Olympic runner during the 1930s, he flew B-24s during WWII. Taken prisoner by the Japanese, he endured a captivity harsh even by Japanese standards and was a physical and mental wreck at the end of the war. He was saved by the influence of Billy Graham, who inspired him to turn his life around, and afterward devoted himself to evangelical speeches and founding boys' camps. Still alive at 93, Zamperini now works with those Japanese individuals and groups who accept responsibility for Japanese mistreatment of POWs and wish to see Japan and the U.S. reconciled. He submitted to 75 interviews with the author as well as contributing a large mass of personal records. Fortunately, the author's skills are as polished as ever, and like its predecessor, this book has an impossible-to-put-down quality that one commonly associates with good thrillers. HIGH-DEMAND BACKSTORY: This departure from the author's previous best-seller will nevertheless be promoted as necessary reading for the many folks who enjoyed the first one or its movie version.--Green, Roland Copyright 2010 Booklist

The author of Seabiscuit (2001) returns with another dynamic, well-researched story of guts overcoming odds.Hillenbrand examines the life of Louis Zamperini, an American airman who, after his bomber crashed in the Pacific during World War II, survived 47 days on a life raft only to be captured by Japanese soldiers and subjected to inhuman treatment for the next two years at a series of POW camps. That his life spiraled out of control when he returned home to the United States is understandable. However, he was able to turn it around after meeting Billy Graham, and he became a Christian speaker and traveled to Japan to forgive his tormentors. The author reconstructs Zamperini's wild youth, when his hot temper, insubordination, and bold pranks seemed to foretell a future life of crime. His talents as a runner, however, changed all that, getting him to the 1936 Olympics and to the University of Southern California, where he was a star of the track team. When the story turns to World War II, Hillenbrand expands her narrative to include men who served with him in the Air Corps in the Pacific. Through letters and interviews, she brings to life not just the men who were with Zamperini on the life raft and in the Japanese camps, but the families they left behind. The suffering of the men is often difficult to read, for the details of starvation, thirst and shark attacks are followed by the specifics of the brutalities inflicted by the Japanese, particularly the sadistic Mutsuhiro Watanabe, who seemed dedicated to making Zamperini's life unbearable. Hillenbrand follows Watanabe's life after the Japanese surrender, providing the perfect foil to Zamperini's. When Zamperini wrote to his former tormentor to forgive him and attempted to meet him in person, Watanabe rejected him. Throughout are photographs of World War II bombers, POW camps, Zamperini and his fellow GIs and their families and sweethearts, providing a glimpse into a bygone era. Zamperini is still thriving at age 93.Alternately stomach-wrenching, anger-arousing and spirit-liftingand always gripping.]] Copyright Kirkus Reviews, used with permission.
More book reviews at iDreamBooks.com