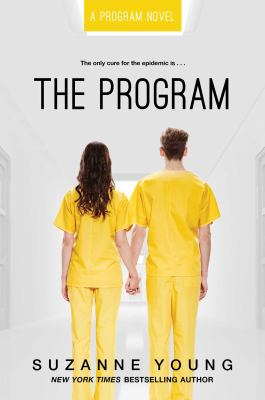 DDC classification: 813.6 Summary: When suicide becomes a worldwide epidemic, the only known cure is The Program, a treatment in which painful memories are erased, a fate worse than death to seventeen-year-old Sloane who knows that The Program will steal memories of her dead brother and boyfriend.
Tags from this library: No tags from this library for this title. Log in to add tags.
Fiction notes: Click to open in new window

In this "gripping tale for lovers of dystopian romance" ( Kirkus Reviews ), true feelings are forbidden, teen suicide is an epidemic, and the only solution is The Program.

Sloane knows better than to cry in front of anyone. With suicide now an international epidemic, one outburst could land her in The Program, the only proven course of treatment. Sloane's parents have already lost one child; Sloane knows they'll do anything to keep her alive. She also knows that everyone who's been through The Program returns as a blank slate. Because their depression is gone--but so are their memories.

Under constant surveillance at home and at school, Sloane puts on a brave face and keeps her feelings buried as deep as she can. The only person Sloane can be herself with is James. He's promised to keep them both safe and out of treatment, and Sloane knows their love is strong enough to withstand anything. But despite the promises they made to each other, it's getting harder to hide the truth. They are both growing weaker. Depression is setting in.

And The Program is coming for them.

When suicide becomes a worldwide epidemic, the only known cure is The Program, a treatment in which painful memories are erased, a fate worse than death to seventeen-year-old Sloane who knows that The Program will steal memories of her dead brother and boyfriend.

In Young's chilling Orwellian tale, planet Earth is hit with a suicide epidemic and the only way to prevent additional fatalities is something called "the Program": a cure that eliminates depression, but also wipes clean the memories of those who are treated with it. Joy Osmanski's narration in this audio edition has a cold, sterile feel that perfectly reflects the author's prose. Her well-paced delivery will captivate listeners, and her portrayal of central character Sloane-a 17-year-old girl who is afraid to let her true feelings show for fear of ending up in the Program-is layered with raw emotion. Ages 14-up. A Simon Pulse hardcover. (Apr.) (c) Copyright PWxyz, LLC. All rights reserved.

Gr 10 Up-In this alternate reality tale (S & S/Simon Pulse, 2013), suicide is an epidemic that plagues those under 18. In response, the government has developed a treatment known as The Program. Patients have infected memories removed, leaving them cured and depression-free. Having endured the suicides of her brother and best friend and then the breakdown of her boyfriend, 17-year-old Sloane is a likely candidate for The Program and is soon transported against her will to a facility for treatment. What follows is a mind-numbing regimen of therapy and medication that succeeds in wiping away parts of her memory despite her best efforts to hold on to her past. Aware that something is amiss yet unsure what it is, Sloane attempts to piece her life back together and learns that The Program isn't everything it claims to be. Joy Osmanski delivers Young's words with a restraint that belies the tension-filled story, capturing the characters' emotional turmoil without exaggerating their despair. Listeners hear and feel the frustration and confusion in their voices, especially Sloane's, whose first-person narrative drives the story. Whether it's ferocity and anger after beginning treatment or anguish when her boyfriend is gone. Osmanski's depiction of Sloane's vulnerability is understated, hinting at complex emotions that are simmering beneath the surface. This solid production invites listeners to reflect on an uncomfortable subject. A thought-provoking addition to teen collections.-Audrey Sumser, Cuyahoga County Public Library, Mayfield, OH (c) Copyright 2013. Library Journals LLC, a wholly owned subsidiary of Media Source, Inc. No redistribution permitted.

*Starred Review* Imagine that suicide is a contagious condition affecting only teenagers. The early warning signs are negative emotions, depression, and despair, and infected teens are driven quickly to the point where they can think of nothing but suicide. This is Sloane's world. She watched her beloved brother kill himself before her eyes. If not for the love of her boyfriend, James, Sloane is sure that she would kill herself, too. But she and James have vowed to each other that they will fight the disease, and love and comfort each other through grief. Teens seen demonstrating negative emotions are reported to The Program, where they receive the cure for the suicide infection but at a terrible cost. When Sloane finds herself swept into The Program, she realizes with a growing dread that everyone seems to know more than she does. Readers will devour this fast-paced story that combines an intriguing premise, a sexy romance, and a shifting landscape of truth. With big questions still unanswered and promising twists, this first volume in a new series will leave readers primed for more. Compare to Lauren Oliver's Delirium or Ally Condie's Matched series.--Colson, Diane Copyright 2010 Booklist

When teenagers begin committing suicide at epidemic rates, drastic solutions are required. It's not clear whether it is contagious, environmental, or due to permanent chemical changes from all the antidepressants previous generations took (best to just skip the scientific inquiries and accept the premise), but now that one in three teens dies before hitting eighteen, The Program, with its remarkable success rate, is more and more appealing for parents. Sure, teens might come out with their memories gone, their personalities wiped away, and their ability to function in the world impaired, but at least they are alive. Sloane, a teen who struggles with depression, hides her feelings as long as she can, but ultimately ends up shipped off to The Program, where she fights desperately to emerge whole, even as her memories disappear one by one. The novel is broken into three sections that effectively mirror the stark differences in Sloane's life: before she is committed, during, and after. The uncomfortable mix of the good intentions and horrific outcomes of The Program is chilling, and will likely haunt readers as a slightly-too-plausible path adults would choose to "save" their teens. april spisak (c) Copyright 2013. The Horn Book, Inc., a wholly owned subsidiary of Media Source, Inc. No redistribution permitted.

As a teen-suicide epidemic sweeps the nation, Sloane and her friends struggle with depression from which the only release is death or The Program. Every day the teens pretend that they're not "infected" in order to avoid being seized by The Program. This government-sanctioned treatment returns high schoolers to the community after stripping them of their memories and making them vacant versions of their former selves. With raw emotion, 17-year-old Sloane relates the story in three parts. In the first, Sloane and her boyfriend, James, cling to their intense love while their friends commit suicide or are taken away. There's nowhere to hide as Sloane and James try and fail to keep themselves from The Program. The stomach-churning second part follows Sloane in treatment, where her memories are plucked and her body violated, and her only friend is playing both sides. Finally, Sloane is re-introduced to her school and family. She retains one key memory, which leads her back to fear, pain and love. How this epidemic began and whether The Program is a sinister conspiracy is left unanswered, but despite weak worldbuilding and a bleak plot, Sloane's quest for survival and individuality is a tribute to the tenacity of the essential self. For lovers of dystopian romance, this gripping tale is a tormented look at identity and a dark trip down Lost-Memory Lane. (Dystopian romance. 14 up)]] Copyright Kirkus Reviews, used with permission.
More book reviews at iDreamBooks.com