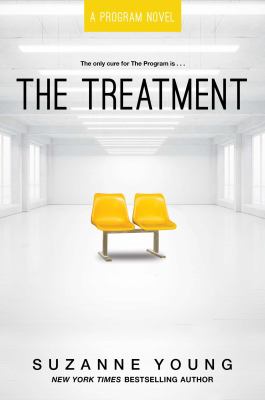 DDC classification: [Fic] Summary: Working with rebels to bring down The Program, a suicide prevention treatment in which painful memories are erased, Sloane and James consider taking The Treatment to unlock their memories.
Tags from this library: No tags from this library for this title. Log in to add tags.
Fiction notes: Click to open in new window
No physical items for this record

Can Sloane and James survive the lies and secrets surrounding them, or will The Program claim them in the end? Find out in this sequel to The Program , which Publishers Weekly called "chilling and suspenseful."

How do you stop an epidemic?

Sloane and James are on the run after barely surviving the suicide epidemic and The Program. But they're not out of danger. Huge pieces of their memories are still missing, and although Sloane and James have found their way back to each other, The Program isn't ready to let them go.

Escaping with a group of troubled rebels, Sloane and James will have to figure out who they can trust, and how to take down The Program. But for as far as they've come, there's still a lot Sloane and James can't remember. The key to unlocking their past lies with the Treatment--a pill that can bring back forgotten memories, but at a high cost. And there's only one dose.

Ultimately when the stakes are at their highest, can Sloane and James survive the many lies and secrets surrounding them, or will The Program claim them in the end?

Sequel to: The Program.

Working with rebels to bring down The Program, a suicide prevention treatment in which painful memories are erased, Sloane and James consider taking The Treatment to unlock their memories.

In this follow-up to The Program (2013), Sloane flees with the last pill that can revive stolen memories, even as the threat of betrayal surrounds her. Sloane ruefully compares her life to a low-budget action movie, and the novel's chase shows little sign of wrapping up. Amid the fast-paced adventure is the welcome resumption of Sloane's sexy-sweet romance with James. The strong writing masks some plot holes (Really? Only one pill is left?), and there is little backstory provided. Still, fans of psychological thrillers will happily suspend small disbeliefs for the overall thrill of the ride.--Colson, Diane Copyright 2014 Booklist

After losing their normal lives, friends, and memories in the suicide-prevention treatment, Sloane and James are on the run from the predatory Program handlers. Sloane has a pill that can reverse The Program's effects, but she struggles to decide whom to trust with this powerful antidote. The sharp, thrilling sequel to The Program further explores the complex relationship between memory and identity. (c) Copyright 2014. The Horn Book, Inc., a wholly owned subsidiary of Media Source, Inc. No redistribution permitted.

In this wrenching sequel to The Program (2013), a few desperate teens race to save what's left of their memories and salvage the tatters of their lives. After being discharged from The Program, a facility developed to stop the teen-suicide epidemic by removing teens' memories, Sloane and James have reignited the passion of their former love. The Program's cure, however, isn't foolproof, and memories can "crash back," causing brain bleeds and insanity. Moreover, The Program has instituted procedural lobotomies and, with the government's backing, is beginning to make teen "behavior modification" mandatory. Sloane and James join a group of rebels intent on destroying The Program, and Sloane holds the one last pill that returns memories. In constant pursuit of the rebels, The Program wants to destroy the pill, but the doctor behind The Program, having seen the error of his ways, seems to want to reproduce it. The story is unrelentingly dramatic: "I put the blade to my neck and began to saw," recounts Sloane's friend Realm, describing his anguish. Compelling questions left dangling from the first book as to the origins of the epidemic, whether "behavioral contagion" and/or media hype, are explored. Offering great appeal to reflective romantics, this jarring thriller looks at the cost of societal complacency while lauding heroism and remembrance. (Dystopian romance. 14-18)]] Copyright Kirkus Reviews, used with permission.
More book reviews at iDreamBooks.com