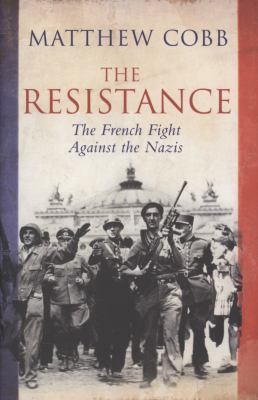 The resistance : the French fight against the Nazis Matthew Cobb.

DDC classification: 940.548644 COB Summary: A gripping and insightful history of the French Resistance and the men and women who opposed Nazi occupation during World War II.--Publisher.
Tags from this library: No tags from this library for this title. Log in to add tags.

The French resistance to Nazi occupation during World War II was a struggle in which ordinary people fought for their liberty, despite terrible odds and horrifying repression. Hundreds of thousands of Frenchmen and women carried out an armed struggle against the Nazis, producing underground anti-fascist publications and supplying the Allies with vital intelligence. Based on hundreds of French eye-witness accounts and including recently-released archival material, The Resistanceuses dramatic personal stories to take the reader on one of the great adventures of the 20thcentury.

The tale begins with the catastrophic Fall of France in 1940, and shatters the myth of a unified Resistance created by General de Gaulle. In fact, De Gaulle never understood the Resistance, and sought to use, dominate and channel it to his own ends. Brave men and women set up organisations, only to be betrayed or hunted down by the Nazis, and to die in front of the firing squad or in the concentration camps. Over time, the true story of the Resistance got blurred and distorted, its heroes and conflicts were forgotten as the movement became a myth.

By turns exciting, tragic and insightful, The Resistancereveals how one of the most powerful modern myths came to be forged and provides a gripping account of one of the most striking events in the 20thcentury.

A gripping and insightful history of the French Resistance and the men and women who opposed Nazi occupation during World War II.--Publisher.

Plenty has been written about the French Resistance, but no dedicated English volume comes close to this superb, comprehensive account. When the Nazis invaded France in 1940, scores of ordinary people made the extraordinary decision to take action, no matter the risks, in order to oust their occupiers. Cobb (The Egg and Sperm Race) relies on hundreds of interviews, diaries, Resistance newspapers and literature, as well as vast stores of European archival material to present a riveting account of the period. The book covers all levels of the movement, shifting seamlessly from the point of view of the young high school kids clashing with police and soldiers in the streets of Paris; to communist hit squads boldly gunning down German officers; the strategizing of leaders like de Gaulle, Petain, and Churchill; and the confusion and excitement of the liberation of Paris. Expanding his viewpoint, Cobb explores in detail the Resistance's relationship to the Holocaust and its subsequent impact on French history, as well as the overstated role of de Gaulle. Cobb's work is an important contribution to the English literature on World War II and will appeal to anyone interested in military or French history. 20 b&w photos, 2 maps, and a glossary. Agent: Peter Tallack, Science Factory (U.K.). (July) (c) Copyright PWxyz, LLC. All rights reserved.
More book reviews at iDreamBooks.com