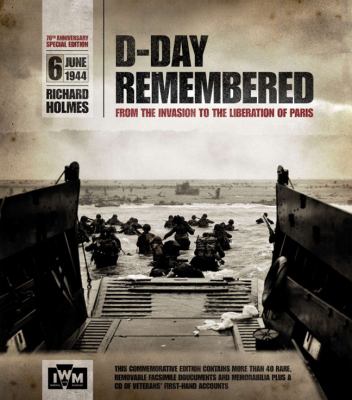 D-day remembered : from the invasion to the liberation of Paris / Richard Holmes.

D-Day was the largest amphibious invasion in history, and this graphic account explores all the details of its planning and execution, as well as the campaign that effectively destroyed the German forces in France. Enhancing the superb information on key personnel, weapons, and military units are a DVD with veterans' firsthand accounts and more than 40 facsimile documents, including a German radio signal log timed at 4:15am on D-Day, propaganda leaflets, log book extracts, diary extracts, military orders, maps, and much more.
Published in association with the Imperial War Museum, London, one of the world's leading museums devoted to military history, to celebrate the 70th anniversary of D-Day.

"In association with Imperial War Museums."

"This commemorative edition contains rare, removable facsimile documents plus a DVD featuring the film D-Day: Assault on Fortress Europe and a collection of veterans' first-hand accounts"--Cover.

"Material from this book was originally published in The D-Day Experience by Richard Holmes in 2004"--T.p. verso.

Includes the facsimile documents in 4 envelopes.