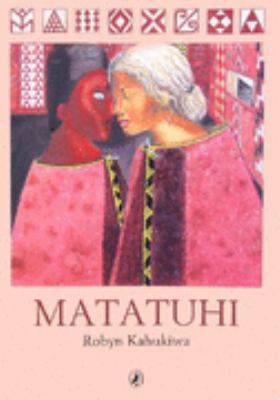 Long ago, Matatuhi, a fabulous weaver and a woman with special powers, dreams of making a special cloak, and of encountering a young girl with fair hair and green eyes. Many years later, in modern times, a girl named Mata is adopted by Pakeha parents. She has fair hair, but brown skin.On a class visit to an ancient meeting house at a museum one day, Mata is entranced by a beautiful cloak, and a carved woman figure with a moko chin tattoo who seems to speak to her. Later, she dreams of feathered cloaks and an old Maori woman with a moko. Mata s life is now changed. She is taken to meet her Maori family, and she reclaims her original Maori name Matatuhi. Soon she even finds an old kuia who is happy to teach her to weave her goal is a beautiful cloak, like that of her kuia, Matatuhi.

Mata was adopted into a Pakeha family and knows very little about her Maori heritage. But then one day Mata's class visits the museum. What she discovers there will change her life forever. Suggested level: junior, primary.