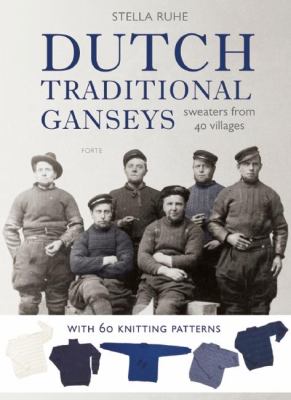 In the period between 1875 and 1950, Dutch fishermen wore sweaters with distinctive knit and purl stitch patterns and sometimes cables. The sweaters were knit out of sturdy blue, natural, grey or black wool. The women from the fishing villages along the Dutch coast would use their own patterns, and because of the close-knit character of many fishing communities, these patterns could be linked to specific towns. A fisherman could be identified by his gansey: the motif could for instance be traced back to Urk or Katwijk. Stella Ruhe collected many patterns and motifs and had the ganseys reknit using modern yarns. This book contains historical and new photographs, sketches and charts for all the ganseys, which you can use to knit a gansey from your favorite fishing village. Of course, the historical context of these ganseys is as important as the objects themselves. That is why the book is also full of stories and interesting facts about the daily life of fishermen #150; with a few fishy stories as well! The combination of history and modern patterns make Dutch Traditional Ganseys a unique book for knitters, and a great read for everyone interested in craft, culture and heritage.