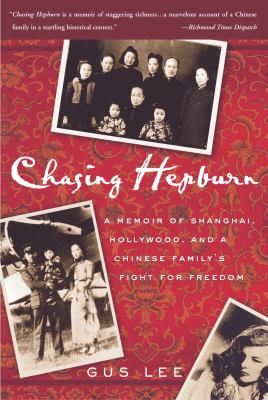 Chasing Hepburn : a memoir of Shanghai, Hollywood, and a Chinese family's fight for freedom / Gus Lee

"Lee . . . has created a gripping and beautiful portrait of his family. . . . Chasing Hepburn is nonfiction, but it reads just as richly as any novel."-- Boston Globe

"Gus Lee brings to his first work of nonfiction the consummate storytelling skills that have always delighted us in his critically acclaimed novels. I promise you that you will be captivated by this epic story of two families who epitomize all that is rich and varied in Chinese culture."
--Ron Bass, screenwriter of The Joy Luck Club and Rain Man

Gus Lee takes us straight into the heart of twentieth-century Chinese society, offering a clear-eyed yet compassionate view of the forces that repeatedly tore apart and reconfigured the lives of his parents and their contemporaries. He moves deftly from recounting intimate household conversations to discussing major historical events, and the resulting story is by turns comic, harrowing, tragic, and heroic.

Chasing Hepburn is a saga that spans four generations, two continents, and half of Chinese history. In the masterful hands of acclaimed author Gus Lee, his ancestors' stories spring vividly to life in a memoir with all the richness of great fiction.

In his first nonfiction book, novelist Lee (China Boy) writes a lively memoir that centers on the life of his family in Shanghai during the Chinese civil war. Lee's parents, T.C. Lee and Da-Tsien Tzu, broke with Chinese tradition and arranged their own marriage. In their courting years, watching first-run movies in Shanghai in the early 1930s, they were attracted to strong-willed actress Katharine Hepburn and recognized each other's determination to be independent. T.C. Lee, a hyperactive person who chose a mobile career in the Chinese military and befriended the wealthy T.A. Soong, met Hepburn and became romantically involved with other American actresses in Hollywood. In the meantime, while raising their children and still living with her in-laws and parents in China, Da-Tsien Tzu became devoted to Western Christianity and eventually "walked across China" during the Japanese occupation with three of her children to reunite with her husband in California in the 1940s. Lee reveals how his parents struggled to mesh American and Chinese images and values. Recommended for large public libraries.-Peggy Spitzer Christoff, Library of Congress (c) Copyright 2010. Library Journals LLC, a wholly owned subsidiary of Media Source, Inc. No redistribution permitted.

Lee, author of four autobiographical novels (China Boy; Honor and Duty; etc.) opens his first nonfiction work with the distressing story of his mother Da-tsien's foot-binding in 1909 China. The women about to break the child's toes whisper terms of endearment. Suddenly, as often happens in this rewarding, ambitious memoir, a dramatic turn pushes Da-tsien's life in an unexpected direction: she's rescued. Her father, who can't bear her screams and has been influenced by foreign books, puts an end to the ritual. Lee writes that he assembled the "fractured clan stories" he was raised on to produce this family history, and although a sheaf of letters from his deceased father helped, he found it necessary to create "bridges" with "imagined details." In this respect, his experience as a novelist helps, and his writing is a constant pleasure of vibrant detail and effective dialogue, from his retelling of his parents' interactions with underworld gangsters in 1920s Shanghai to his depiction of their enthrallment with Katharine Hepburn, which eventually leads them to America. Lee's most remarkable skills, however, are his ability to deftly move between the personalities of his family tree and the family's intimate moments, and his observations of Chinese cultural history. When, for example, his grandmother fears Da-tsien's unbound feet will bring destruction upon the family, Lee so carefully explains the social forces pressing down on her that, although relieved for his mother, readers will find themselves worrying along with his grandmother. Photos. Agent, Jane Dystel. (On sale Jan. 14) Forecast: Advertising and publicity to West Coast markets, blurbs from the San Francisco Chronicle and the book's characters' eventual arrival on the American side of the Pacific should make this popular among Californian readers. (c) Copyright PWxyz, LLC. All rights reserved

The violent opening scene is unforgettable: Da-tsien, a screaming three-year-old baby girl in Soochow, China, in 1909 is being held down to have her tiny feet broken in the traditional foot binding ceremony. Her kind, scholarly father rescues her just in time, but after that her mother viciously rejects the daughter with great big feet ("Who will marry her now?" ). Da-tsien grows up in Shanghai to reject an arranged marriage when she is 14 and to choose as her husband the glamorous young rogue Zee Zee, from across the street. The couple falls in love watching American movies together, romanticizing Katharine Hepburn, who represents independence and glamour, far from the restrictions of Chinese tradition. And yet, what's most devastating is that this brave, liberated Da-tsien still feels bound by her "destiny" to produce a son, and she bitterly rejects her second daughter as viciously as her own mother rejected her. Meanwhile her restless husband wants adventure, and he continually abandons his family to the violent upheaval of China's civil war and the unspeakable atrocities of the Japanese World War II occupation, until, finally, Da-tsien walks on those strong feet thousands of miles out of China with her daughters, and chases her husband to California--where they do have a son, Gus Lee, who honors her now in this book. His mother died when he was five, but he draws on told and retold family stories to write her memoir, and it reads like his acclaimed autobiographical novels, setting the personal revolution against the sweep of war. The history is powerful, and so are all the ironic, intimate connections at the heart of the story, the haunting portrait of a tempestuous marriage and a brave woman warrior not yet free. --Hazel Rochman

Award-winning novelist Lee (No Physical Evidence, 1998, etc.) tells the story of his parents' childhoods, courtship, and unconventional lives in China and America. When Tzu Da-tsien was a child, her father rescued her from the traditional foot-binding ceremony, forever excluding her from the sort of advantageous marriage expected of a woman of her aristocratic background. The Chinese Revolution was soon to put an end to these customs, but even so she continued to flout tradition, spurning an arranged marriage and falling in love with the equally unconventional Lee Zee Zee, poor but dashing, an aspiring pilot whose father had frittered away his family fortune on opium and concubines. After meeting in gangster-ridden Shanghai, the couple must survive the power struggles between the Communists and the Kuomintang, the Japanese invasion, and Zee Zee's own ambivalence at being caught in a conventional marriage, which causes him to leave home frequently, first to serve in the Chinese Air Force and then to go to Hollywood to seek out his favorite actress, Katharine Hepburn. Lee tells his parents' story with gusto-perhaps too much at times. He seems determined to cram in as much family history as possible, with the result that the thread of the narrative occasionally threatens to disappear in a welter of unrelated anecdotes (particularly at the beginning, where he bounces hyperactively between stories of each parent's family). In addition, the writing is often clumsy, uneasily mixing contemporary American slang, Chinese words, and a stilted form of English meant to represent formal Chinese. Nevertheless, the vanished world of traditional China and the chaos of its post-Revolutionary era are brought vibrantly to life, and Lee's affection for his parents shines through despite the occasional rough patch. Awkwardly written but rich in detail: a uniquely personal perspective on one of the most fascinating and tumultuous periods in history.
More book reviews at iDreamBooks.com