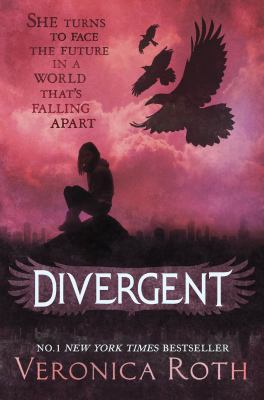 BookPublisher: London : HarperCollins Children's Books, 2014Description: 487 pages ; 20 cm.Content type: text Media type: unmediated Carrier type: volumeISBN: 9780007420421.Genre/Form: Dystopias. | Young adult fiction. | Science fiction. | Teen fiction.DDC classification: 813.6
Contents:
In a future Chicago, sixteen-year-old Beatrice Prior must choose among five predetermined factions to define her identity for the rest of her life, a decision made more difficult when she discovers that she is an anomoly who does not fit into any one group, and that the society she lives in is not perfect after all.
List(s) this item appears in: TV and Movies
Tags from this library: No tags from this library for this title. Log in to add tags.
Fiction notes: Click to open in new window

She turns to the future in a world that's falling apart.

For sixteen-year-old Tris, the world changes in a heartbeat when she is forced to make a terrible choice. Turning her back on her family, Tris ventures out, alone, determined to find out where she truly belongs.

Shocked by the brutality of her new life, Tris can trust no one. And yet she is drawn to a boy who seems to both threaten and protect her. The hardest choices may yet lie ahead....

The first book in the DIVERGENT series that has swept the globe - selling millions of copies world-wide.

In a future Chicago, sixteen-year-old Beatrice Prior must choose among five predetermined factions to define her identity for the rest of her life, a decision made more difficult when she discovers that she is an anomoly who does not fit into any one group, and that the society she lives in is not perfect after all.

In this edgy debut (definitely not for the fainthearted), first in a trilogy, promising author Roth tells the riveting and complex story of a teenage girl forced to choose, at age 16, between her routinized, selfless family and the adventurous, unrestrained future she longs for. Beatrice "Tris" Prior lives in crumbling dystopian Chicago, where citizens are divided into five factions¿Candor, Abnegation, Dauntless, Amity, and Erudite¿depending on their beliefs, passions, and loyalties. When Tris forsakes her Abnegation family to become one of the wild, fearless Dauntless, she must confront her deepest fears, learn to trust her fellow initiates, and guard the ominous secret that she is actually a Divergent, with the strengths of multiple factions, and is therefore a target of dangerously controlling leaders. Roth's descriptions of Tris's initiation process are as spellbinding as they are violent, while the tremulous romance between Tris and her protective and demanding instructor, Four, unfurls with heart-stopping tenderness. For those who loved The Hunger Games and are willing to brave the sometimes sadistic tests of strength and courage Tris must endure, the reward is a memorable, unpredictable journey from which it is nearly impossible to turn away. Ages 14¿up. (May).

Gr 9 Up-In a futuristic Chicago, the populace is divided into distinct factions, each devoted to a particular virtue: Candor, Abnegation, Dauntless, Amity, and Erudite. At 16, Beatrice parts ways with her family and chooses her own path, only to find that the highly structured society isn't as perfect she's been led to believe. A dystopian thriller filled with secrets, suspense, and romance. (June) (c) Copyright 2011. Library Journals LLC, a wholly owned subsidiary of Media Source, Inc. No redistribution permitted.

In the future, you are born into one of five factions, each of which has its strength and focus: Abnegation (service), Candor (truth), Erudite (intellect), Amity (friendship), or Dauntless (fearlessness). But on your sixteenth birthday, you can choose a new faction if you are so compelled, and that's what happens to Tris, who shocks everyone by exchanging the drab gray robes of Abnegation for the piercing and tattoo stylings of Dauntless. What follows is a contest, where only the top 10 initiates are accepted into the final group. This framework of elimination provides the book with a built-in tension, as Tris and her new friends and new enemies go through a series of emotional and physical challenges akin to joining the marines. Roth is wisely merciless with her characters, though her larger world building is left fuzzy. (Is there a world beyond this dystopian version of Chicago?) The simplistic, color-coded world stretches credibility on occasion, but there is no doubt readers will respond to the gutsy action and romance of this umpteenth spin on Brave New World.--Kraus, Daniel Copyright 2010 Booklist

In future Chicago, sixteen-year-old Beatrice should have discovered which of her society's five factions--Candor, Abnegation, Dauntless, Amity, Erudite--she belongs to after taking a sorting test. However, her results are inconclusive, which could get her killed; or she might just save the world. The story's fast-paced action; romance; and strong, intelligent characters facing difficult choices will appeal to Hunger Games fans. (c) Copyright 2011. The Horn Book, Inc., a wholly owned subsidiary of Media Source, Inc. No redistribution permitted.

Cliques writ large take over in the first of a projected dystopian trilogy.The remnant population of post-apocalyptic Chicago intended to cure civilization's failures by structuring society into five "factions," each dedicated to inculcating a specific virtue.When Tris, secretly a forbidden "Divergent," has to choose her official faction in her 16th year, she rejects her selfless Abnegation upbringing for the Dauntless, admiring their reckless bravery. But the vicious initiation process reveals that her new tribe has fallen from its original ideals, and that same rot seems to be spreading... Aside from the preposterous premise, this gritty, paranoid world is built with careful details and intriguing scope. The plot clips along at an addictive pace, with steady jolts of brutal violence and swoony romance. Despite the constant assurance that Tris is courageous, clever and kind, her own first-person narration displays a blank personality. No matter; all the "good" characters adore her and the "bad" are spiteful and jealous. Fans snared by the ratcheting suspense will be unable to resist speculating on their own factional allegiance; a few may go on to ponder the questions of loyalty and identity beneath the faade of thrilling adventure.Guaranteed to fly off the shelves. (Science fiction. 14 up)]] Copyright Kirkus Reviews, used with permission.
More book reviews at iDreamBooks.com