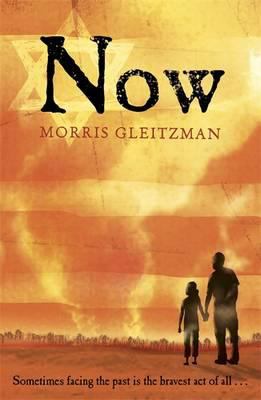 | Australia -- Juvenile fictionGenre/Form: Children's stories, Australian. | Children's nonfiction.DDC classification: Junior ficton Summary: "Once I didn't know about my grandfather Felix's scary childhood. Then I found out what the Nazis did to his best friend Zelda. Now I understand why Felix does the things he does. At least he's got me. My name is Zelda too. This is our story"--Back cover. Suggested audience: primary, intermediate, junior secondary.
Tags from this library: No tags from this library for this title. Log in to add tags.

Sometimes facing the past is the bravest act of all...

ONCE
I didn't know about my grandfather Felix's scary childhood.

THEN
I found out what the Nazis did to his best friend Zelda.

NOW
I understand why Felix does the things he does.

At least he's got me. My name is Zelda too. This is our story.

Now is the third in a series of children's novels about Felix, a Jewish orphan caught in the middle of the Holocaust, from Australian author Morris Gleitzman - author of Bumface and Two Weeks with the Queen . The other books in the series, Once , Then and After are also available from Puffin.

"Sometimes facing the past is the bravest act of all"--Cover.

"Once I didn't know about my grandfather Felix's scary childhood. Then I found out what the Nazis did to his best friend Zelda. Now I understand why Felix does the things he does. At least he's got me. My name is Zelda too. This is our story"--Back cover. Suggested audience: primary, intermediate, junior secondary.

Following Once and Then, this finale to Gleitzman's trilogy brings the stories of Felix and Zelda, orphaned children in Nazi-occupied Poland, to a conclusion both frightening and tender. Though this story can be read on its own, similarities in narrative voice connect the tales (as in the earlier volumes, the titular word begins each chapter). Readers of the previous books will quickly recognize a new setting-21st-century Australia-and narrator: Felix's 10-year-old granddaughter, named Zelda after his brave, murdered friend. Gleitzman subtly explores Felix's terrible survivor's guilt and its effect on following generations, against the backdrop of Australia's heat wave and devastating 2009 bushfires. Felix's impassioned confrontation with local bullies ("People die because of stupid, vicious talk like that") gives Zelda a rare glimpse into the past of a grandfather she admires, while emphasizing how undeserving she feels of her name, believing she lacks her namesake's bravery. Felix's altruism in the face of calamity frees Zelda to embrace the present, while her courage helps him save a life and put to rest his oldest love. A poignant close to an affecting and heartrending history. Ages 10-up. (May) (c) Copyright PWxyz, LLC. All rights reserved.

Gr 5-9-Jumping ahead 70 years from where Once (2010) and Then (2011, both Holt) left off, this sequel finds Felix, a Holocaust survivor, about to mark his 80th birthday and caring for his adoring 11-year-old granddaughter while her parents are volunteering as doctors in Darfur. The fact that her parents called her Zelda is problematic to both the girl and her grandfather. Named after the 6-year-old girl who Felix-then only 10 himself-rescued from her home after her parents had been slain in 1942, the modern-day child is keenly aware that she is the namesake of a talented, inspirational, and brave individual whom she feels will always be the most important person in her grandfather's life. She feels hopelessly inferior to the departed Zelda, and feels especially lacking in courage since she began having run-ins with bullies at her new school. What his granddaughter does not fully understand is that Felix has his own deeply guarded and painful associations with the name, which is why he always refers to her as "Babushka," instead. So, while both Felix and his granddaughter are clearly thoughtful and capable human beings, they're also both psychologically hamstrung by the memories of the original Zelda. It'll take a regional disaster-a holocaust of a very different kind-for the pair to finally get over the past and begin appreciating the Now. While this book is perfectly understandable as a stand-alone title, it will be best appreciated by readers of the earlier volumes who are invested in the saga and who will find this title a clever and satisfying way of coming full circle.-Jeffrey Hastings, Highlander Way Middle School, Howell, MI (c) Copyright 2012. Library Journals LLC, a wholly owned subsidiary of Media Source, Inc. No redistribution permitted.

In Once (2010) and Then (2011), Felix is a Polish Jewish boy on the run from the Nazis, and he witnesses unspeakable brutality. In this stand-alone sequel, he is a grandfather, honored in his community in Victoria, Australia, as a great surgeon, and the narrator is Felix's loving granddaughter, Zelda, named for the young Polish girl who saved him during the Holocaust and then perished. Always haunted by the past, Felix rages when his granddaughter is bullied at school, but there are no heavy, too-slick parallels between past and present. The catastrophe here is Australia's 2009 wild bush fires, and readers will be caught up in the young girl's first-person narrative of now as she and Felix fight against the blazing inferno, and she tries to ignore the bully's text messages. As Felix and Zelda flee to safety with her beloved dog and join the rescue of their neighbors, she is torn by guilt: Did she start the blaze?--Rochman, Hazel Copyright 2010 Booklist

Gleitzman's third book about Felix (Once, rev. 3/10; Then, rev. 5/11) takes the boy decades and miles away from where we last saw him, witnessing the hanging corpses of his friend Zelda and their protector Genia, both murdered by the Nazis. Now Felix is eighty, a retired doctor of some renown, living in a small town near Melbourne and temporarily caring for his granddaughter, named by her parents in honor of Felix's friend (although Felix prefers to call her babushka). While young narrator Zelda misses her parents (away doctoring in Darfur), she treasures her grandfather, but her elaborate plans to celebrate his birthday are beset by school bullies and natural disaster, specifically the "Black Saturday" bushfires that burned Victoria in 2009. For the most part, Gleitzman allows the parallels to Felix's own childhood to emerge naturally and without undue pointing, and he gracefully fills in the seventy-year gap in the narrative to let us know how Felix arrived at a life of relative contentment. The bushfires provide the book with the eventfulness and appeal of a survival story, and although her psychological portrait is sometimes too obvious, Zelda, impulsive but loving, is a credible narrator whose feelings and actions propel the story, which is equally hers and Felix's. roger sutton (c) Copyright 2012. The Horn Book, Inc., a wholly owned subsidiary of Media Source, Inc. No redistribution permitted.

Once and Then (2010, 2011) blend into Now in today's Australia as Dr. Felix Salinger, 80, relates his childhood and shows his present to his 11-year-old granddaughter, narrator Zelda. What occurs in their todays smoothly links the old story of Felix's horrific childhood in Nazi-controlled Poland with sometimes-happy, sometimes-unpleasant events in a small bush town. The girl is staying with Felix because her physician parents are in Darfur to help its people through a modern genocidal catastrophe. Local girls bully Zelda in the opening scene, and readers should be shocked and frightened by this experience. When Felix meets the bullies, in his anger he says, "Don't you know anything?"--a sharp echo of the very young Zelda of decades ago. Today's Zelda is named for her, but it is a weight, since the girl of the present feels she cannot live up to that other, long-dead girl, hanged by the Germans for an act of defiance that allowed Felix to escape the noose. A bush fire of horrendous size, fury and speed tests the mettle of the two, and Gleitzman's description of it is brilliant in its realism. Readers of the first two books will recognize a great deal, and those who have not should read them to gain a fuller picture of the years before and those in which we live. A fine, taut novel full of understanding. (author's note) (Historical fiction. 9-12)]] Copyright Kirkus Reviews, used with permission.
More book reviews at iDreamBooks.com