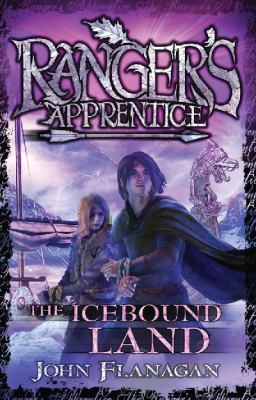 Summary: Will and Evanlyn are bound for Skandia as the captives of the fearsome Skandian wolfship captain, Erak. Halt and Horace set out to rescue Will, but are constantly challenged by freelance knights. Can they make it in time to rescue Will from a life of slavery? Suggested level: intermediate, junior secondary.
Tags from this library: No tags from this library for this title. Log in to add tags.
Fiction notes: Click to open in new window

The Ranger's apprentice is about to be sold into slavery - but help can arrive from the most unexpected places . . . Will and Evanlyn are bound for Skandia as the captives of the fearsome Skandian wolfship captain, Erak. Halt has sworn to rescue Will, and he will do anything to keep his promise - even defy his King. Expelled from the Rangers, Halt is joined by Horace as he travels through Gallica towards Skandia. On their way, they are constantly challenged by freelance knights - otherwise known as thieving thugs. Horace knows a thing or two about combat, though, and he soon begins to attract the attention of knights and warlords for miles around with his uncanny skill. But will they be in time to rescue Will from a life of slavery?The third book in the Australian and New York Times mega-selling Ranger's Apprentice series.

Sequel to: The burning bridge.

Will and Evanlyn are bound for Skandia as the captives of the fearsome Skandian wolfship captain, Erak. Halt and Horace set out to rescue Will, but are constantly challenged by freelance knights. Can they make it in time to rescue Will from a life of slavery? Suggested level: intermediate, junior secondary.

Will and Evanlyn, introduced in the first volume of John Flanagan`s Ranger's Apprentice series (which PW called "an exciting tale of battle and honor"), find themselves kidnapped and aboard a slave ship, having fought the evil Morgarath at the end of the last book. As Horace and Halt head towards Skandia to rescue their friends, they discover that many challenges stand in their way in Ranger's Apprentice: The Icebound Land, the series' third installment. (Philomel, $16.99 256p ages 10-up ISBN 9780-399-24456-8; June) (c) Copyright PWxyz, LLC. All rights reserved

Gr 5-9-This third installment in the series picks up where The Burning Bridge (Philomel, 2006) left off. Apprentice Ranger Will and Evanlyn (Princess Cassandra incognito) are being taken by ship to the snowy northern country of the Skandians, a Viking-like group of raiders who plan to sell them as slaves. Will's mentor Halt, frustrated at not being allowed to follow them, stages an incident to get himself thrown out of the Ranger corps so that he can mount a rescue mission. He is joined by Will's friend Horace, and the chapters alternate neatly between Will and Evanlyn's plight in Skandia and Halt and Horace's obstacle-ridden journey to find them. As in the previous titles, the action is well paced and the writing style is engaging. The main characters continue to be believable and to inspire readers' interest and sympathy. A particular strength of this series is that Will has never been the effortless hero. Though talented and intelligent, he makes mistakes and he often needs help from those around him-making him a very realistic and appealing protagonist. Fans of the series will not be disappointed in this latest installment and will be left eagerly anticipating the next one.-Amanda Raklovits, Champaign Public Library, IL (c) Copyright 2010. Library Journals LLC, a wholly owned subsidiary of Media Source, Inc. No redistribution permitted.

"The third book in the Ranger's Apprentice series features a dual story, switching between the ranger's apprentice, Will, accompanied by princess Evanlyn, and the ranger, Halt, accompanied by Will's friend Horace, a young knight-in-training. After an unsuccessful attempt to escape from the ship where they are captives, Will and Evanlyn are taken to Skandia and put to work as slaves. Meanwhile, Halt and Horace ride to the rescue, or at least toward the rescue, only to be detained by a series of petty thieves and a nefarious knight. Although both strands of narrative feature journeys, each provides its own challenges for the characters and pleasures for readers. The Halt/Horace strand combines elements of knightly combat with a certain dry wit, and the Will/Evanlyn strand offers a good adventure story with a surprising twist. Throughout the novel, Flanagan's deft character portrayals and well-paced story will engage readers, and the ending will leave them clamoring for the next volume."--"Phelan, Carolyn" Copyright 2007 Booklist

Apprentice ranger Will and princess-in-disguise Evanlyn endure slavery until escaping from the Viking-like Skandians. Ranger Halt and Battleschool apprentice Horace defeat a rogue knight en route to attempting a rescue. The incidental plot develops grist for future installments rather than coming to a resolution, but fans of the guileless characters and elemental combat strategies will enjoy the agreeable journey. (c) Copyright 2010. The Horn Book, Inc., a wholly owned subsidiary of Media Source, Inc. No redistribution permitted. All rights reserved.

A mild case of middle-volume-itis afflicts the third episode in this increasingly popular fantasy series, as Flanagan alternates short chapters to weave a double-stranded tale that advances the main story only an inch or two while filling out the page count with incidental adventures and repetitive explanations. In the odd-numbered chapters, Will and Evanlyn, enslaved by Skandian (Viking) captors in the previous volume, manage to escape into the snowy northern mountains, but only after Will acquires an addiction to warmweed, a brain-numbing narcotic. In the even-numbered ones, Will's Ranger mentor Halt and talented knight-in-training Horace set out through Gallica (France) on a rescue mission, and are themselves temporarily imprisoned by a cruel robber baron. The author hasn't expended much effort to develop original cultures or characters, but--repeated side comments and references to past events aside--his fluent writing, engaging protagonists and credibly choreographed fight scenes will keep readers involved. (Fantasy. 11-13) Copyright ©Kirkus Reviews, used with permission.
More book reviews at iDreamBooks.com