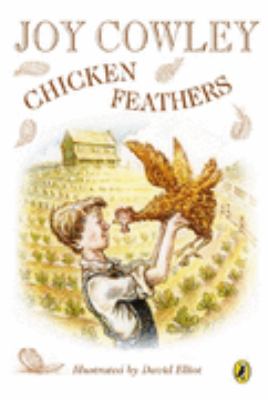 Genre/Form: Children's stories, New Zealand. | Children's stories. | Children's fiction.DDC classification: Junior fiction Awards: New Zealand Post Book Awards for Children & Young Adults 2009 Finalist.Summary: Josh is a worrier and for a good reason. A brother or sister is about to be born, but his mother is in hospital with something called 'complications'. Grandma has arrived to run the household while Josh's dad is busy with their chicken farm. And then there's Semolina, Josh's cantankerous but extraordinary pet hen who can talk and has warned Josh about a fox on the loose in the chicken house. Suggested level: primary.
Tags from this library: No tags from this library for this title. Log in to add tags.
Fiction notes: Click to open in new window

A feel-good story about Josh, and his cantankerous pet hen, Semolina.

First published in the United States.

Josh is a worrier and for a good reason. A brother or sister is about to be born, but his mother is in hospital with something called 'complications'. Grandma has arrived to run the household while Josh's dad is busy with their chicken farm. And then there's Semolina, Josh's cantankerous but extraordinary pet hen who can talk and has warned Josh about a fox on the loose in the chicken house. Suggested level: primary.

Gr 3-5-Much of the tension in this charming, witty chapter book centers around the question of whether Josh's pet hen, Semolina, really does talk. After all, she talks to Josh and to Josh alone. This wouldn't be such a problem if Semolina didn't have such important information to impart concerning a fox who has formed a gang to extort protection money (in the form of eggs) from the hens in the number three shed-dozens of eggs a day. This is a loss the Miller family can ill afford, what with Elizabeth confined to the hospital for three months awaiting the birth of a new baby. As Tucker tells his son, "Your mom and I are not good layers, and that's the truth of it." Then there's the added complication that cranky, opinionated Semolina has developed a taste for Grandma's home brew and refuses to divulge what she knows unless she's paid off in "brown water." Tucker is as unable to believe in a tippling hen as a loquacious one and disconcertingly seems to suspect Josh of sampling the liquor. Grandma just plain dislikes the hen. It all comes to a head when Semolina is attacked and carried off by the fox. Family and friends rally round and Josh is able to appreciate how loved and supported he has been all along. Elliott's personality-laden pencil illustrations extend readers' sense of Cowley's characters. The image of Tucker, scratching his head as he tries to negotiate the tricky emotional ground between sympathy for Josh and respect for prickly Grandma, speaks volumes. Original, well-crafted, and touching, Cowley's story begs to be read aloud-over and over again.-Miriam Lang Budin, Chappaqua Public Library, NY (c) Copyright 2010. Library Journals LLC, a wholly owned subsidiary of Media Source, Inc. No redistribution permitted.

There is nothing remarkable about Josh Miller's life on his family's chicken farm. He collects eggs, tends chard, and fans the flames of a crush on neighbor girl Annalee. Indeed, the only extraordinary part of his rural existence is his geriatric, beer-obsessed, talking pet chicken, Semolina. She's not always a blemish, though. When Josh's mother enters the hospital because of a difficult pregnancy, Semolina becomes a reluctant confidante. Unfortunately, she speaks only to Josh, and when she identifies a fox as the egg-thieving culprit everyone is looking for, no one believes him. The story unfolds as a smooth amalgam of nostalgic farm tale and contemporary problem novel. Elliot's warm, evocative pencil sketches, reminiscent of Robert McCloskey's work, combine with Cowley's rich storytelling voice to reinforce the novel's sunny, bucolic surface. Small, lovely details, and careful character development, including a complex relationship between Josh's mother and visiting grandmother, add resonance to the deeper account of a nine-year-old's first struggles to find his place in the world and at home.--Barthelmess, Thom Copyright 2008 Booklist

(Intermediate) In a place adjacent to Rootabaga Country and Centerburg, where people eat ham-and-corn fritters and say "yep" a lot, there lives a ten-year-old boy and his talking chicken. Such is the premise of this gentle, folksy short novel of life on the farm. Josh is having a full summer. He is building a boat. His mother is in the hospital in the later stages of a difficult pregnancy. His grandmother has come to stay. And there's a fox threatening the chickens, specifically Josh's beloved Semolina, who talks only to him. Josh's earnest father, beautiful Annalee Binochette who lives next door, the grumpy grandmother, and reliable, competent Josh himself are nicely defined characters, but Semolina steals the show. She is demanding, strident, and stubborn. She has her own philosophy and theology. She also has an overwhelming fondness for Grandmother's home brew. The two plot strands of the baby-to-be and Semolina's fox drama weave together naturally, and a scene in which hundreds of chickens announce the birth of Josh's sister with a cacophonous chorus, "a song of rejoicing at the laying of a new warm egg," is a delicious moment of magic realism. From HORN BOOK, (c) Copyright 2010. The Horn Book, Inc., a wholly owned subsidiary of Media Source, Inc. No redistribution permitted.

Channeling Dick King-Smith, Cowley offers a warmhearted tale set on a chicken farm featuring a lad with a feathered confidante that talks--though only to him. In the double-stranded plot, Josh's mother is abruptly off to the hospital to prevent another miscarriage, while back on the farm eggs are disappearing. Josh's hen Semolina fearfully tells him that there's a fox on the prowl, but Josh can't convince his distracted dad. Then Semolina disappears, leaving blood and scattered feathers. Though the humans in the cast display individual quirks and feelings, it's Semolina, temperamental and occasionally poetic--"Sun egg or moon egg, fast time or slow time, foxes hunt chickens with big sharp teeth"--who's the most vividly drawn character here. Elliot provides an aerial view of the farm, plus a spare selection of spot art. Tucking in just the right number of subplots, the author builds to a climax infused with the sense of the miraculous, leverages happy endings all around (except for the fox) and closes with a twist. Not a standout, but expertly done. (Fantasy. 9-11) Copyright ©Kirkus Reviews, used with permission.
More book reviews at iDreamBooks.com