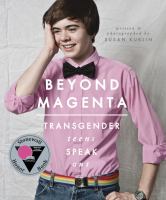 A groundbreaking work of LGBT literature takes an honest look at the life, love, and struggles of transgender teens.

Author and photographer Susan Kuklin met and interviewed six transgender or gender-neutral young adults and used her considerable skills to represent them thoughtfully and respectfully before, during, and after their personal acknowledgment of gender preference. Portraits, family photographs, and candid images grace the pages, augmenting the emotional and physical journey each youth has taken. Each honest discussion and disclosure, whether joyful or heartbreaking, is completely different from the other because of family dynamics, living situations, gender, and the transition these teens make in recognition of their true selves.

Spectrum. Jessy : the house of my soul ; Christina : every girl is different ; Mariah : the real deal ; Cameron : variables ; Nat : something else -- Lifeline. Luke : untouchable -- Notes and resources. About the Callen-Lorde community health center ; Q & A with Dr. Manel Silva ; About Proud Theater.

"Author and photographer Susan Kuklin met and interviewed six transgender or gender-neutral young adults and used her considerable skills to represent them thoughtfully and respectfully before, during, and after their personal acknowledgment of gender preference. Portraits, family photographs, and candid images grace the pages, augmenting the emotional and physical journey each youth has taken. Each honest discussion and disclosure, whether joyful or heartbreaking, is completely different from the other because of family dynamics, living situations, gender, and the transition these teens make in recognition of their true selves" --Amazon.com, viewed February 12, 2014.

In a sorely needed resource for teens and, frankly, many adults, author/photographer Kuklin shares first-person narratives from six transgender teens, drawn from interviews she conducted and shaped with input from her subjects. The six "chapters" read like personal histories, with Kuklin interjecting occasional context and helping bridge jumps in time. Readers will gain a real understanding of gender as a spectrum and a societal construct, and of the challenges that even the most well-adjusted, well-supported transgender teens face, from mockery by peers and adults alike to feelings of isolation and discomfort in their own bodies. When readers meet New York City teenager Christina, she has gotten into a knock-down fight on the subway with two girls who were making fun of her; although Kuklin's color and b&w portraits appear throughout, 19-year-old Mariah requests no photographs of her be used, confessing, "I'm not ready for people to see me." While Kuklin's subjects are candid about the difficulties of coming out as transgender to family and friends and the patience that transitioning often requires, their honest, humorous, and painful remarks about their relationships with gender are often downright revelatory. "Because I'm perceived as male, I get male privileges. It weirds me out a little bit," says Cameron, whose PGP (preferred gender pronoun) is the plural "they." Nat, who also prefers "they," is relieved when diagnosed as intersex. "It proved what I had been feeling all along. I was not only emotionally, psychologically, and spiritually both sexes; I was physically both sexes, too. This is who I am." A q&a section, author notes, glossary, and print and online resources close out the book. But its chief value isn't just in the stories it reveals but in the way Kuklin captures these teenagers not as idealized exemplars of what it "means" to be transgender but as full, complex, and imperfect human beings. As Kuklin writes, "My subjects' willingness to brave bullying and condemnation in order to reveal their individual selves makes it impossible to be nothing less than awestruck." She isn't wrong. Ages 14-up. Agent: Brianne Johnson, Writers House. (Feb.) (c) Copyright PWxyz, LLC. All rights reserved.

Gr 9 Up-The strength and honesty of six transgender teens stand out as their stories are told by a large cast of outstanding performers, including Nick Podehl, Roxanne Hernandez, Nancy Wu, and Marisol Ramirez. Each tells a complex personal tale of realization, coming out, communication with family and friends, struggles, and triumph through adversity. Each performer speaks in the gender of the person's current self-identity, which is occasionally confusing, although a main narrator, reading Kuklin's (No Choirboy) words as she conducted these interviews, provides context for each teen's story. The teens are voiced in a totally believable way with various regional accents. They tell the stories as flawed but full human beings, and as they talk about bullying, mental health, clinical history, and problems with family and friends, listeners will be inspired by their lives. Unfortunately, neither the photographs from the book nor the interview with Dr. Silva, clinical director of the Health Outreach to Teens (HOTT) program in New York City, are included in the audio format.-Ann Brownson, Eastern Illinois University, Charleston (c) Copyright 2014. Library Journals LLC, a wholly owned subsidiary of Media Source, Inc. No redistribution permitted.

*Starred Review* Kuklin's book profiles six transgender teens in both their own words and the author's excellent photographs. The result is a strikingly in-depth examination of the sometimes clinical complexities of being transgender, even as Kuklin's empathy-inducing pictures put a human face on the experience. The profiles are evenly divided between FTM (female to male) and MTF (male to female) teens. Also represented are a variety of races and ethnicities, and included are one teen who is intersex and another who regards themself as pansexual (several of the teens choose to identify themselves with the gender-neutral pronouns they, them, and their). Though their experiences differ, the teens often stress that, as Kuklin puts it, Gender is one variable in a person's identity, and sexual orientation is another variable. The two are not connected. Similarly, Kuklin makes clear that, despite the popular misconception, all trans teens are not gay. Further information is contained in an appended interview with Dr. Manel Silva, clinical director of the HOTT (Health Outreach to Teens) program at the New York City-based Callen-Lorde Community Health Center, which has served the needs of several of the profiled teens. Kuklin's important new book brings welcome clarity to a subject that has often been obscure and gives faces literally and metaphorically to a segment of the teen population that has too long been invisible. Speaking with equal impact to both the reader's heart and mind, Beyond Magenta is highly recommended.--Cart, Michael Copyright 2014 Booklist

Rather than attempting to convey the spectrum of transgender experience through a multitude of voices, Kuklin tries something different here, focusing on just six young people whose gender identity is something other than what it was labeled at birth. All six take gender-altering hormones; four were birth-designated male and two female, but in all cases there is no confusion about who they are now. Christina, born Matthew, looks forward to a complete transition ("It would be so great if I could get an operation, if I could get my vagina"), while Cameron says, "I like to be recognized as not a boy and not a girl. I'm gender queer, gender fluid, and gender other." In her edited transcriptions of the interviews, Kuklin lets her subjects speak wholly for themselves, and while their bravery is heartening, their bravado can be heartbreaking. But who expects teenagers to be tentative? Photographs (of most of the subjects) are candid and winning; and appended material, including Kuklin's explanation of her interview process, a QA with the director of a clinic for transgendered teens, and a great resource list, is valuable. roger sutton (c) Copyright 2014. The Horn Book, Inc., a wholly owned subsidiary of Media Source, Inc. No redistribution permitted.

Kuklin (No Choirboy, 2008, etc.) brings her intimate, compassionate and respectful lens to the stories of six transgender young people. In verbal and, when the subjects have given permission, visual profiles, readers meet transgender teens with a wide range of backgrounds and experiences. They hear from teens who identify fully as female or male, teens who identify as neither male nor female, and one teen who is intersex. Their stories are told largely in the teens' own words, with only a few italicized interpolations to clarify or contextualize a point or to describe a facial expression or inflection readers cannot see or hear. In photographs, readers see Nat, who attends a performing-arts high school in New York City and uses the personal gender pronouns them and they, carrying their violin on New York's High Line. Christina, who attends Fashion Institute of Technology, is pictured shopping for clothes, proudly displaying a school project and hugging her mother. Images of the young people before their transitions are often included but, appropriately, do not serve as focal points for their chapters. Similarly, sex and genitalia are discussed frankly but are rarely what matters most. The collective portrait that emerges from these narratives and pictures is diverse, complex and occasionally self-contradictory--as any true story should be. Informative, revealing, powerful and necessary. (author's note, glossary, resource list) (Nonfiction. 12 up)]] Copyright Kirkus Reviews, used with permission.