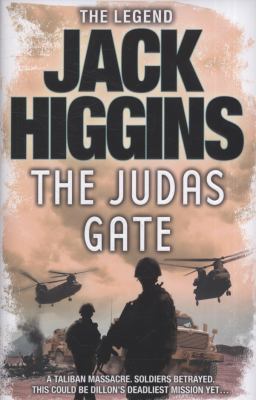 DDC classification: Fiction Summary: A disturbing tape has made its way to British intelligence, and from them to the new President of the United States: battlefield chatter from an ambush in Afghanistan, in which both US and British died. Most of the voices are Afghan, but the voice of the commander bears an Irish accent. Sean Dillon is asked to hunt the traitor down.
Tags from this library: No tags from this library for this title. Log in to add tags.
Fiction notes: Click to open in new window
Total holds: 0

A disturbing tape has made its way to British intelligence. It contains battlefield chatter from an ambush in Afghanistan, in which 12 U.S. Army Rangers and a British medical team died. Most of the Taliban voices are Afghan, but the voice of the commander bears an Irish accent. Sean Dillon is put in charge of hunting the traitor down.

A disturbing tape has made its way to British intelligence, and from them to the new President of the United States: battlefield chatter from an ambush in Afghanistan, in which both US and British died. Most of the voices are Afghan, but the voice of the commander bears an Irish accent. Sean Dillon is asked to hunt the traitor down.

The massacre of 12 U.S. Army Rangers and a British medical team in Afghanistan reveals that an Irishman, code-named Shamrock, is applying IRA tactics to the Taliban's struggle against the West in Higgins's less than satisfying 18th Sean Dillon thriller (after The Wolf at the Door). Fearful that British-born Muslims may be heeding the call to jihad, officials employ Daniel Holley, a former IRA terrorist turned arms dealer, whose rich network of contacts may allow him to track down the elusive Shamrock. Since the well-connected Shamrock's own sources have alerted him that Holley is on his tail, Holley and his allies soon find themselves targeted by the very people they were supposed to neutralize. Fortunately for Holley, Shamrock, whose skills should have made him a close match for Holley, proves an inept foe. Nearly every move against the invincible Holley is foredoomed, and only minor characters are ever in true peril, robbing the book of dramatic tension. (Jan.) (c) Copyright PWxyz, LLC. All rights reserved.

Sean Dillon, the former IRA soldier and missionary who now works for the British government, has another tough case on his hands. In Afghanistan, a unit of American soldiers and British medicos were ambushed. Some of the attackers were British-born Muslims, which is bad enough, but it appears their leader might be a mysterious Irishman who calls himself Shamrock. Against his better judgment, Dillon reaches out to an expert on the Irish element: Daniel Holley, an assassin who once nearly killed Dillon. This is an especially dialogue-heavy novel much of the action is implied, or takes place off camera perhaps because the author is interested in exploring the relationship between Dillon and Holley. Like the previous Dillon novel, The Wolf at the Door (2010), this one is slower paced, more introspective, and frankly, not quite as engaging as some of the earlier entries in the series. Fans, however, will want to see Dillon through to the end.--Pitt, David Copyright 2010 Booklist

Higgins (The Wolf at the Door, 2010, etc.) pits the Taliban and al-Qaeda against the British prime minister's "private hit squad," led by the redoubtable Gen. Charles Ferguson.The action involves Ireland and England, with high-flying escapades into Pakistan and Algeria, but it all begins in Afghanistan with an intercepted radio transmission, one occurring during a firefight between the Taliban and NATO troops. Gen. Ferguson knows something wicked is afoot when one of the guerrilla commanders is heard speaking with an Irish accent and using the code name "Shamrock." Are British Muslims supporting the Taliban and al-Qaeda? Enter Sean Dillon, once an enforcer for the Provisional Irish Republican Army and now Gen. Ferguson's top anti-terrorist agent. With Dillon at the sharp end of the spear is Daniel Holley, also former IRA, but now a somewhat legitimate arms dealer with Algerian citizenship. They are aided by wounded Maj. Giles Roper, who mans the computers for the squad and plays a vital part in the search. There are assorted other good guys, including night club owners and part-time counter-agents Harry and Billy Salter, more than enough bad guys and traitors working both sides of the terror game. Also deeply enmeshed is Justin Talbot, a decorated British veteran of Afghanistan who now is de facto head of his family's influential multimillion-dollar corporation and who also dabbles in illicit arms trading. The most diabolical Judas is the Preacher, a respected British professor who has embraced Osama bin Laden and Islamic fundamentalism. Higgins' adventure is action-driven, with minimal character development, no romance and plenty of male bonding. Fans of the genre will appreciate the noisy occasions involving Semtex, AK-47s, silenced Colt .25s and villains coming to proper grief and swift justice.Sure to be a hit with Higgins' fans, and a fast first read for newcomers to the work of this action-adventure writer.]] Copyright Kirkus Reviews, used with permission.
More book reviews at iDreamBooks.com