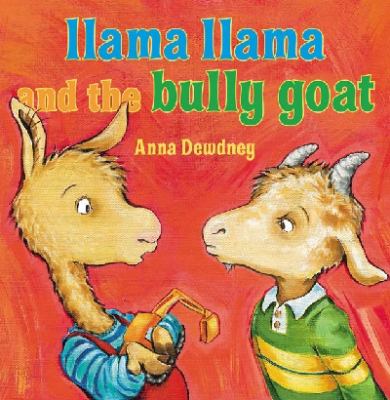 Gilroy laughs at everything.

Llama sings out just the same.

Teacher has some things to say:

calling names is not OK.

Llama Llama is learning lots of new things at school and making many friends. But when Gilroy Goat starts teasing him and some of their classmates, Llama Llama isn't sure what to do. And then he remembers what his teacher told him--walk away and tell someone. It works! But then Llama Llama feels badly. Can he and Gilroy try to be friends again?

Taking on a difficult but important part of children's lives, Anna Dewdney gives readers a way to experience and discuss bullying in a safe and comforting way.

Following their teacher's lead, Llama Llama speaks to Gilroy Goat and tells him he should not act like a bully on the playground.

Following their teacher's lead, Llama Llama speaks to Gilroy Goat and tells him he should not act like a bully on the playground.

Llama Llama is growing up-instead of being the source of "llama drama," he's more of a peacemaker in this empathic addition to Dewdney's popular series. Rather, it's classmate Gilroy Goat causing problems: he pokes fun at Llama and other students during circle time and throws a tantrum at recess. "Gilroy bleats and kicks the dirt./ He gets sand on Llama's shirt." Dewdney's canvas-textured paintings continue to express the deep emotions of her characters, and the story espouses the value of getting adults involved when bully goats act out-and of giving them second chances. Ages 3-5. Agent: Deborah Warren, East West Literary Agency. (Aug.) (c) Copyright PWxyz, LLC. All rights reserved.

PreS-Gr 1-Llama Llama and his friends cannot enjoy their school day because Gilroy Goat is being a bully. He laughs at the other animals during circle time, and he calls Llama Llama a "not-nice name" when he tries to sing. Although Gilroy's teacher tries to correct his behavior, the bullying continues into recess (dirt throwing and destructiveness) until the llama calls him a Bully Goat. Realizing he's hurt potential new companions, Gilroy is happy to accept Llama Llama's renewed offer of friendship. Dewdney's characters are rendered in paint, pencil, and pastels. The victims, the bully, and even the witnesses all look scared, worried, or sad throughout the story. This book clearly shows children the social, emotional, and academic consequences of bullying, how to take a stand against it, and how to be tolerant of someone who needs a second chance. A great discussion starter.-Tanya Boudreau, Cold Lake Public Library, AB, Canada (c) Copyright 2013. Library Journals LLC, a wholly owned subsidiary of Media Source, Inc. No redistribution permitted.

The latest Llama Llama comic drama has a dual focus. The first is on the fun and learning encountered during a busy preschool day. The second is how all of this activity can be wrecked by one kid (literally a kid here a young goat), Gilroy, who is not only a billy goat but also, yes, a bully goat. Gilroy snickers at the others during class time, and during recess, he kicks up sand and knocks over the toys and equipment of others. No fooling around here; Dewdney's solution is to walk away and tell someone. Good advice couched in pleasant rhymes and gentle, nicely textured pastel illustrations.--Fletcher, Connie Copyright 2010 Booklist

Being bullied is no fun... / Walk away / and tell someone!" Llama Llama follows his teacher's lead and tells a classmate to quit behaving like a bully. LL and friends tell their teacher, and "Gilroy gets a long time-out." The simplistic solution gives young children an easy-to-understand approach to coping with bullying. Dewdney's familiar character and the singsongy rhyming text help make the overt lesson palatable. (c) Copyright 2014. The Horn Book, Inc., a wholly owned subsidiary of Media Source, Inc. No redistribution permitted.

Llama Llama loves the fun things he gets to do at school, but will a Bully Goat ruin his day? Writing, drawing, counting, playing with clay, singing songs during circle time--what's not to love about school? Well, being called names and laughed at for clapping and singing along, for one thing. Being the target of sand that's kicked and dirt that's thrown for another. Teacher has already made it clear that Gilroy Goat's name-calling will not be tolerated, but Teacher isn't near the sandbox. What will Llama Llama and Nelly Gnu do? Stand up to him, of course: "Gilroy, this is not OK. / Stop it, or we'll go away." They then walk away and tell a teacher. After Gilroy's requisite lecture and long timeout, kindly Llama Llama approaches him, offering to let him play. While the resolution is too pat, and everyone gets over their feelings unbelievably quickly, still, Dewdney's lovable Llama Llama offers children one strategy to combat bullying, all couched in her trademark rhyming verse and presented through situations that are sure to resonate with those new-to-school. Her textured oil, colored-pencil and oil-pastel illustrations shine when portraying the animals' faces--joy, discomfort, surprise, anger, stubbornness, disappointment are all crystal-clear on them. While children should not expect a Bully Goat to change his ways so quickly, this does provide them with some tools against bullying. (Picture book. 3-5)]] Copyright Kirkus Reviews, used with permission.
More book reviews at iDreamBooks.com