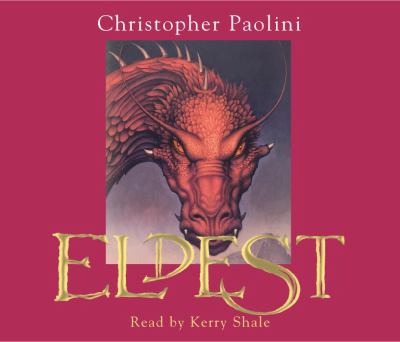 Eragon and his dragon, Saphira, have just saved the rebel state from destruction by the mighty forces of King Galbatorix. Now, Eragon must travel to Ellesmera, land of the elves, for further training in magic and swordsmanship, the vital skills of the Dragon Rider. It is the journey of a lifetime, filled with awe-inspiring new places and people."

After successfully evading an Urgals ambush, Eragon is adopted into the Ingeitum clan and sent to finish his training so he can further help the Varden in their struggle against the Empire.

The second volume in Paolini's popular Inheritance Trilogy continues the story begun in Eragon. Eragon the dragon rider and Saphira, his dragon, are being trained in the forest city of Ellesmera while Roran, Eragon's cousin, helps the villagers escape Carvahall and flee the siege by the Ra'zacs. There is a large cast of characters and complex story lines, and listeners must be familiar with the first novel before beginning this sequel. But the clear narration of this abridgment makes the plot easy to follow, and little is lost in the production. Though there is not much differentiation in the characters' voices, it is always apparent who is speaking. The recording is evenly paced, the sound clean and clear, and the Spanish straightforward and smooth. Overall, this is a worthwhile addition to larger Spanish-language audio collections.--Roxanne Landin, Ferguson Lib., Stamford, CT (c) Copyright PWxyz, LLC. All rights reserved All rights reserved.

Gr 5 Up-Eldest (Knopf, 2005), Christopher Paolini's much-anticipated sequel to Eragon (Knopf, 2003; Listening Library, 2004) is filled with the magic of elves, dwarves, and dragons, as well as the human struggles of villagers beleaguered by the dark forces of Galbatorix, a tyrannical king. Opening on the battlefield where Eragon and his dragon companion, Saphira, have been victorious, the novel splits into two story strands that meet in the midst of another combat engagement at the book's conclusion. In the interim, Eragon and Saphira are involved in a bit of political intrigue, a little romance, and long periods of rigorous training, while Roran, Eragon's older cousin, joins with other farmers and tradesmen to defend and then flee their remote hometown of Carvahall. Ra'zacs, the treacherous creatures who killed Roran's father, are not only after him, they have also snatched his true love, Katrina. Eragon has not forgotten his friends and kin, but he is absorbed with his responsibilities as Dragon Rider. When the cousins' circuitous paths converge, they fight beside an army both human and magical to repel Galbatorix's forces again. The two strong-willed young men also resolve past misunderstandings surrounding the death of the man who raised both of them. Even with a plot that covers many detailed passages and a huge cast of characters, narrator Gerard Doyle masterfully sustains the intense personalities of the two questing men and the gravelly-voiced dragon. The sound quality and case are as solid and sturdy as the powerful-looking dragon who stares out from the cover. Reading and recalling Eragon will be very helpful for listeners as they try to follow the sequel's complex series of events and myriad characters. This fantasy/adventure has enough bloody battles and heroic rescues to keep fans of the genre happily engaged. Sure to be popular, especially since there's still one more book to come in the Inheritance trilogy.-Barbara Wysocki, Cora J. Belden Library, Rocky Hill, CT (c) Copyright 2010. Library Journals LLC, a wholly owned subsidiary of Media Source, Inc. No redistribution permitted.

Gr. 8-11. The second book in the Inheritance Trilogy, following Eragon(2003), takes up the epic story just three days after the end of the bloody battle in which Eragon slew the Shade Durza, and the Varden and dwarves defeated the forces of the evil ruler of the Empire. Although Eragon has proved himself in battle as a Dragon Rider, he has much to learn, so he travels to the land of the elves to complete his rigorous training. Meanwhile, his cousin Roran finds himself the target of Empire forces, which threaten to obliterate his village if Roran is not turned over to them. Alternating narratives follow the exploits of Eragon and of Roran as each plays his role in the inevitable advance toward the final battle. Once again, the expected fantasy elements are well in place, and the characters and their relationships continue to develop nicely. The ending promises an even more cataclysmic battle ahead. --Sally Estes Copyright 2005 Booklist

(Intermediate, Middle School) The tale begun in Eragon with a young farm boy finding a dragon's egg, bonding with the dragon within, and traversing a mythic land (populated by elves, dwarves, an Empire, and a resistance) owed tips of the hat to many fantasy predecessors and suffered from immature and derivative prose. As the story continues here, Eragon and the dragon Saphira travel to the elves' sacred forest to be trained by the last remaining dragon rider; Eragon's cousin Roran leads his village against the Empire's soldiers; and the resistance gears up for the ultimate clash against the despotic ruler Galbatorix. There's lots of imaginative material: Paolini's detailed descriptions and his many digressions into (among other things) elf theology, dwarf social order, and the theory and language of magic give the 681-page volume a very deliberate pace, but the author's enthusiasm for his creation is infectious nonetheless. With a growing storytelling talent fulfilling the promise latent in his first book (though his style is still less than smooth), Paolini requites the devotion of his many readers and will leave them eager for the third volume. (c) Copyright 2010. The Horn Book, Inc., a wholly owned subsidiary of Media Source, Inc. No redistribution permitted. All rights reserved.

Eragon continues his Rider training in this dense sequel. After the epic battle at Farthen Dûr, Eragon travels to the elven city Ellesméra to complete his magical education. There he learns from Oromis and Glaedr, a wounded Rider and his dragon who have been hidden for years, ever since Galbatorix overthrew the old order and slew the Riders. Meanwhile, inhuman servants of Galbatorix have invaded Eragon's home village Carvahall, hoping to capture Eragon's cousin Roran. Roran leads the villagers to join the Varden rebellion against Galbatorix's tyranny. Another epic battle concludes the story and brings the cousins together just in time for a revelation of dark secrets. Suffused with purple prose and faux-archaic language, this patchwork of dialogue, characters and concepts pulled whole cloth from the fantasy canon holds together remarkably well. Dramatic tension is maintained through the interweaving of Eragon's and Roran's adventures, though too much time is spent on the details of Eragon's training. Derivative but exciting. (Fantasy. 12-15) Copyright ©Kirkus Reviews, used with permission.
More book reviews at iDreamBooks.com