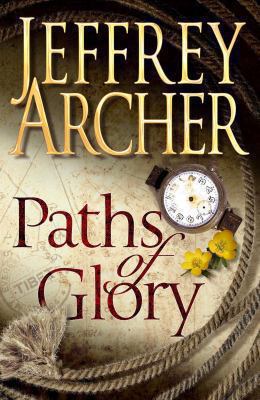 | Everest, Mount (China and Nepal) -- FictionGenre/Form: Detective and mystery fiction. | Historical adventure fiction. | Biographical fiction. | Historical fiction.DDC classification: Fiction Subject: This fictional account of a real-life mountaineering mystery recounts the story of Britain's George Mallory and his attempt to scale Mt. Everest.
Tags from this library: No tags from this library for this title. Log in to add tags.

This fictional account of a real-life mountaineering mystery recounts the story of Britain's George Mallory and his attempt to scale Mt. Everest.

This fictional account of a real-life mountaineering mystery recounts the story of Britain's George Mallory and his attempt to scale Mt. Everest.

Best known for his thrillers, deft storyteller Archer (A Prisoner of Birth) tries something different with this entertaining novel based on the life of famed British climber George Mallory, who disappeared along with climbing partner Andrew Irvine on Mount Everest in 1924 while attempting to become the first man to reach the world's highest peak. Mallory's body was found on Everest in 1999, but whether he succeeded in reaching the top before his death remains one of mountaineering's greatest mysteries. In creating his own imaginative answer to this enigma, Archer provides a readable tale that traces Mallory's path from an adventurous childhood to his education at Cambridge, followed by marriage and military service in World War I. Throughout, Archer interweaves the overarching theme of Mallory's passion for the mountains, which leads him inexorably toward Everest. Although Archer's prose occasionally feels flat and overly workmanlike, this quality is offset by the frequent inclusion of heartfelt and moving letters from Mallory to his beloved wife. This novel is best suited for general readers who enjoy popular fiction, while climbing or adventure devotees may prefer Jochen Hemmleb and others' Ghosts of Everest: The Search for Mallory and Irvine. Biography fans may like Peter and Leni Gillman's The Wildest Dream: The Biography of George Mallory. Recommended for larger public libraries. [See Prepub Alert, LJ 11/15/08.]-Ingrid Levin, Salve Regina Univ. Lib., Newport, RI (c) Copyright 2010. Library Journals LLC, a wholly owned subsidiary of Media Source, Inc. No redistribution permitted.

Veteran actor Roger Allam brings an impressive range and energy to Archer's historical novel. The tale finds its inspiration in the real-life mystery surrounding adventurer George Mallory, who may-or may not-have reached the summit of Mount Everest in 1924 before perishing in the ice and snow. Allam's remarkable accents are the highlight of the audio book, especially in his brief but highly memorable turn as a colorful American agent who organizes a rather exploitative and ethically dubious publicity tour for Mallory. Allam also shines in his portrayal of Mallory's devoted wife, Ruth, who chooses to mask her doubts and fears in order to support her husband's lifelong dream of climbing to the highest point on the planet. Admittedly, Archer's text offers a hero who would rather explore mountains than the depths of moral or psychological complexity, but Allam's performance renders the listening experience entertaining. A St. Martin's hardcover (Reviews, Jan. 5). (Mar.) (c) Copyright PWxyz, LLC. All rights reserved

This historical-adventure novel is a bit of a change of pace for the author of such best-selling contemporary thrillers as Kane & Abel (1979) and The Fourth Estate (1996). Its subject is George Mallory, the famed mountaineer who disappeared while attempting to climb Mount Everest in 1924. (Mallory is the source of the famous line because it is there his answer to the inevitable question asking why one would climb a mountain.) Archer portrays Mallory as an adventurer at heart, a charming, impulsive young man who matures into a dedicated and careful climber. The book shows evidence of exhaustive research. Archer could easily have written a traditional biography, but that wouldn't have permitted him to take the literary license necessary to turn Mallory from a historical figure into a living, breathing human being. This is one of Archer's best efforts, and it's highly recommended to fans of classic adventure fiction.--Pitt, David Copyright 2009 Booklist

Fictionalized account of the mountain climber who may or may not have been the first man to conquer Everest. George Mallory (18861924) was an Englishman very much of his time: a history teacher who enlisted in the Great War when two of his pupils were reported killed, a faithful husband to his devoted wife Ruth, a team member loyal to his mates despite their personal failings. What set him apart were his utter fearlessness and his extraordinary gift for climbing. When he vanished with fellow climber Andrew Irvine during a 1924 assault on Everest, some 30 years before Sir Edmund Hillary's successful ascent, a rapt public was divided over whether he'd reached the peak before his presumed death, a controversy the discovery of his frozen body in 1999 did nothing to resolve. Archer (Prisoner of Birth, 2008, etc.) turns Mallory's life into the tale of an unimpeachably good and heroic man. His most interesting battles aren't with the elements, but with petty bureaucrats who scheme against George Finch, the caddish but accomplished Australian climber Mallory wants as his partner, and with himself, torn between his responsibilities to his long-suffering wife back home and his desire to climb Everest "because it is there." Mountaineering technocrats can look elsewhere: The mountaineering sequences are marred by Archer's apparent ignorance of the mechanics of climbing, reduced here to the debate about whether it's cheating to use bottled oxygen. Nor are the characters especially compelling, since the author seems to feel no need to flesh out real-life figures. A bland yarn in the Boys' Own Adventure mold about an old-fashioned hero from the days when the Empire demanded nothing less. Copyright Kirkus Reviews, used with permission.
More book reviews at iDreamBooks.com