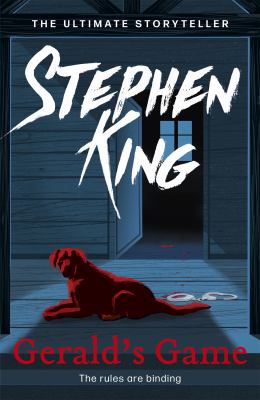 Genre/Form: Psychological fiction. | Horror fiction.Summary: Jessie is trapped: during an ill-fated S&M game, she kicks her husband and induces a fatal coronary. She is handcuffed to the bed in a lakeside cabin in the middle of nowhere, with no means of escape. Voices in her head force her to confront a buried childhood trauma.
List(s) this item appears in: TV and Movies
Tags from this library: No tags from this library for this title. Log in to add tags.
No physical items for this record

A game. A husband and wife game. Gerald's Game.

But this time Jesse didn't want to play. Lying there, spreadeagled and handcuffed to the bedstead while he'd loomed and drooled over her, she felt angry and humiliated.

So she'd kicked out hard. Aimed to hit him where it hurt.

He wasn't meant to die, leaving Jesse alone and helpless in a lakeside holiday cabin. Miles from anywhere. No-one to hear her screams.

Alone. Except for the voices in her head that had begun to chatter and argue and sneer . . .

Jessie is trapped: during an ill-fated S&M game, she kicks her husband and induces a fatal coronary. She is handcuffed to the bed in a lakeside cabin in the middle of nowhere, with no means of escape. Voices in her head force her to confront a buried childhood trauma.

While this is one of the best-written stories King has ever published, it will offend many through sheer bad taste. Jessie and Gerald Burlingame have been married for 20 years. Kinky sex is Gerald's game; lately he has taken to handcuffing his wife to the bedposts. During one such session, via a series of bizarre circumstances, Jessie accidentally kills her husband, and for the next 28 hours she is trapped. King effectively uses this tragicomic conceit to take us deep into the mind of ``Goodwife Burlingame.''sic For the first third of the book he is at the top of his form, creating in Jessie one of his most intense character studies. Then, Jessie's ruminations lead her to remember a long-repressed episode of incest that is startling not because it becomes a central element of the plot, but because the details of the sexual relationship between father and daughter are salaciously--and lengthily--described. The gory stuff--how Jessie escapes her handcuffs, for example--is prime King, but this is subsumed in the book's general tastelessness. A lame wrap-up to what might have been a thrilling short story only further compromises the enjoyment readers might have found in this surprisingly exploitative work. 1.5 million first printing; $750,000 ad/promo; BOMC main selection. (July) (c) Copyright PWxyz, LLC. All rights reserved

It's fall in rural Maine, and Gerald and Jessie Burlingame have retreated to their forest cabin for a little fun of the sexual variety. Bondage, to be exact, with Jessie spread-eagled and handcuffed to a bed and Gerald having his way with her. And then he suffers a fatal heart attack. Most of the rest of King's unusually short (for him) new novel is concerned with Jessie's ordeal as she struggles to get loose while Gerald's body rots. The stress of the situation has her personality splitting into several distinct voices of conscience, each a nagger, each with its own wisdom and foolishness. Eventually, after gruesome sufferings and strategems that involve plenty of pain and bleeding, and after hallucinatorily replaying the previous worst incident of her life and confounding it with the present one, she escapes. Her trials aren't over, though. She still has to deal with the corpse-like figure she thinks invaded the cabin just as she freed herself and that pursued her to her car and has haunted her during her convalescence. Was--is--it real? Somewhat like King's earlier naturalistic shocker, Misery, this book is grim and nasty. Unlike Misery, it's not semiconsciously misogynistic. Quite the reverse: it seems to say that virtually no man and no men's institution can treat a woman decently. A very disturbing stylistic tour de force, this may be King's darkest book. (Reviewed May 1, 1992)0670846503Ray Olson

King takes it over the top, way over the top, in an exquisitely horrifying frightfest about a woman forced to face her deepest fears--and then some. Jessie Burlingame, 39, is getting plenty tired of being handcuffed to the bed of her Maine summerhouse by her attorney- husband, Gerald, so that he can play his silly sex games. So when Gerald refuses to uncuff her, she kicks him in the family jewels, accidentally smashing them to kingdom come--and the terror begins. Each hand cuffed to a bedpost, the keys out of reach, Jessie howls for help--and is answered by a feral dog that proceeds to chow down on Gerald's face in lavishly described, muscle-shredding detail. As the long hours pass, cramps bite like iron jaws into Jessie's own flesh; but they're nothing compared to the thirst raging through her. Can she somehow reach the glass of water on the shelf above her head? It takes the most tightly controlled writing King's ever done to find out, but soon even the thirst pales beside the guilt- gargoyles that Jessie's mind begins to throw up, all pointing at the sun-eclipsed day so long ago when she became much more to Daddy than just his little girl. The minutes tick by, each an agony--and King's just warming up. Night falls: What's that shadow in the corner? The one with the smirking face of Death? And how can Jessie, growing into a heartbreakingly brave heroine, escape? She tugs and tugs at her wrists but can't slip them past the cuffs. Is there a hot, sticky lubricant at hand? He's not really going to describe that, is he? But, with a ferocious gleam in his eye, King does, out-splatterpunking everyone else on the planet in a tour de force that--even given some overindulgent psychologizing, awfully strong echoes of Cujo and Misery, and a long, peculiar anticlimax--is his most wrenching novel to date. This one is really scary.
More book reviews at iDreamBooks.com