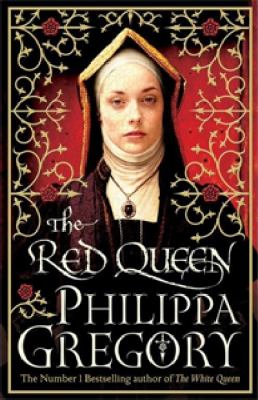 The red queen by Philippa Gregory.

Genre/Form: Biographical fiction. | Historical fiction.DDC classification: Fiction
Contents:
Heiress to the red rose of Lancaster, Margaret Beaufort never surrenders her belief that her house is the true ruler of England and that she has a great destiny before her. Married to a man twice her age, quickly widowed, and a mother at only fourteen, Margaret is determined to turn her lonely life into a triumph.
Tags from this library: No tags from this library for this title. Log in to add tags.

The second book in Philippa's stunning new series, The Cousins War, brings to life the story of Margaret Beaufort, a shadowy and mysterious character in the first book of the series - The White Queen - but who now takes centre stage in the bitter struggle of The War of the Roses. The Red Queen tells the story of the child-bride of Edmund Tudor, who, although widowed in her early teens, uses her determination of character and wily plotting to infiltrate the house of York under the guise of loyal friend and servant, undermine the support for Richard III and ultimately ensure that her only son, Henry Tudor, triumphs as King of England. Through collaboration with the dowager Queen Elizabeth Woodville, Margaret agrees a betrothal between Henry and Elizabeth's daughter, thereby uniting the families and resolving the Cousins War once and for all by founding of the Tudor dynasty.

Heiress to the red rose of Lancaster, Margaret Beaufort never surrenders her belief that her house is the true ruler of England and that she has a great destiny before her. Married to a man twice her age, quickly widowed, and a mother at only fourteen, Margaret is determined to turn her lonely life into a triumph.

Margaret Beaufort is certain of one thing from a very young age: God has destined her for something great. She likens herself to Joan of Arc and longs to be a leader, a figure of importance. Unfortunately, the reality is that for much of her life she is but a pawn in others' games. She clings to the certainty that she is destined for greatness, convinced that her son by Edmund Tudor is the rightful heir to the English throne. Much of her adult life is spent planning, scheming, and looking out for chances to bring Henry Tudor to his true destiny and herself into prominence. The second entry in Gregory's new series, "The Cousins' War," presents a main character far less sympathetic than Elizabeth Woodville of The White Queen. Margaret is self-centered, self-important, and single-minded, but these qualities enable her to persist against overwhelming odds in her quest to see her son crowned king of England. Verdict Like Gregory's other historicals, excellent characterization and a well-researched story will hold the interest of readers, especially fans of the Tudor dynasty.-Pam O'Sullivan, Coll. at Brockport Lib., SUNY (c) Copyright 2010. Library Journals LLC, a wholly owned subsidiary of Media Source, Inc. No redistribution permitted.

Nobody does the Tudors better than Gregory (The Other Boleyn Girl), so it should come as no surprise that her latest-the War of the Roses as seen through the eyes of Henry VII's mother -is confident, colorful, convincing, and full of conflict, betrayal, and political maneuvering. Gregory gives readers Margaret Beaufort in her own words, from innocent nine-year-old to conspiring courtier who stops at nothing to see her son on England's throne. Gregory devotees will note the difference between the supernaturally gifted Yorkist White Queen and Lancastrian Margaret, who, despite saintly aspirations, grows worldly through three marriages; a powerless widow at 13, remarried and separated from her only son by 15, it is not until she's 29 that Margaret is ready to realize her most audacious ambitions. Gregory clones have made historical novels from a woman's perspective far too familiar to make this seem as fresh as her earlier works. Yet, like Margaret Beaufort, Gregory puts her many imitators to shame by dint of unequalled energy, focus, and unwavering execution. (Aug.) (c) Copyright PWxyz, LLC. All rights reserved

Having fictionalized Elizabeth Woodville in The White Queen (2009), royal chronicler Gregory now turns to Henry VIII's other indomitable grandmother. The opposite of her alluring Yorkist rival, plain Lancastrian heiress Margaret Beaufort grows up knowing women are useful only for bearing sons, but divine visions grant her an unwavering conviction about her future greatness. At age 12, she weds Lancastrian warrior Edmund Tudor and pours her ambition into his posthumous son, Henry. Constantly separated from her beloved child after her second marriage to a pacifist knight, her frustrations are palpably felt; she later brokers her own union with a crafty turncoat who may be the key to her hopes. While England seethes with discord during the turbulent Wars of the Roses, Margaret's transformation from powerless innocent to political mastermind progresses believably as rival heirs to England's throne are killed in battle, executed, or deliberately eliminated. With constant pronouncements about Margaret's God-given destiny, the approach isn't exactly subtle, but Gregory's vivid, confident storytelling makes this devout and ruthlessly determined woman a worthy heroine for her time.--Johnson, Sarah Copyright 2010 Booklist

Second in Gregory's series about the War of the Roses, this time featuring a determined matriarch of the Lancastrian clan.Margaret Beaufort, a cousin of Henry VI, vows from an early age to be as pious and staunch as Joan of Arc, and to someday be known as "Margaret R.," for Regina. She spends hours on her knees praying, preferably when others are watching. After a brief, loveless childhood, 12-year-old Margaret is married off to Edmund Tudor, a Welsh earl. Before Margaret gives birth to their son, Edmund is kidnapped by a Yorkist rival and dies of plague. Margaret has high ambitions for her newborn, Henry. However, she will not see him grow up. Once again, noblesse obliges her to get married, this time to Henry Stafford, a cowardly homebody. The Yorkists mount a campaign to put their pretender, Edward, on the throne, and soon he is ruling with his fetching and fecund Queen, Elizabeth, a clairvoyant commoner (eponymous narrator of series opener The White Queen, 2009) reputed to be descended from water sprites. The battles rage on, Henry VI is reinstated and redeposed, and Stafford is killed in the crossfire. Meanwhile, young Henry takes refuge in Brittany with his uncle and guardian, Jasper Tudor. Margaret contracts a marriage of convenience with Lord Stanley, and both ingratiate themselves with King Edward's court, secretly plotting to restore the Lancastrian dynasty. When Edward dies unexpectedly, his brother Richard III takes power and the rest is history, except not the one familiar from Shakespeare. Richard, though unscrupulous and paranoid, is neither a hunchback nor the murderer of the two young princes in the Towerthat crime, still a mystery today, is all but laid at Margaret's door. Since we know Henry Tudor will invade and unseat Richard from horse and throne, the outcome is not in doubt: The suspense inheres in wondering whether Margaret's prodigious hubris will be her downfall.Gregory once again demonstrates her flair for dramatizing history.]] Copyright Kirkus Reviews, used with permission.
More book reviews at iDreamBooks.com